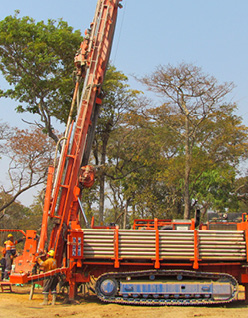 A Very Good Half Year

The figures are in, and it’s official: this has been a very good half year indeed for Capital Drilling. (FTSE:CAPD)

Profit is up across the board, but then that’s nothing particularly new for the Singapore-headquartered drilling contractor.

“It’s another good result on previous good results since the company’s been listed on the stock exchange,” says CEO Geoff Fardell “We’ve had continuing record halves.”

Fardell, installed as CEO only since the start of the calendar year, is self-effacing about his appointment having anything to do with such stellar results, describing  the results as a ”team effort.”

Key to this trajectory is Capital’s skill at keeping the customer satisfied, as evident in its impressive roster of repeat customers.

Even the new contract wins from the likes of Antofagasta and Compania Minera del Pacifico in Chile and Continental Nickel in Tanzania, while technically new relationships, spring from pre-existing relationships.

“We knew some of the guys [in those new projects] from previous projects,” says Brian Rudd, the firm’s Executive Director. “The people we deal with, our reputation has gone with us as they have travelled into other companies. Likewise with [Antofagasta and Compania Minera del Pacifico] we were working for BHP and people had spread the word that we were doing a good job for BHP and we were invited to tender.

“You get an industry reputation,” Rudd says. “People know of you, know your capability.”

Noted in the results presentation is the Importance placed on ‘quality clients’ that is, ‘major and mid-tier mining  houses with strong balance sheets, quality assets and positive cash flows.’ And this half, 79 per cent of the client base was composed of majors, up from 63 per cent for 2011.

While the company has historically had somewhere between 40 per cent and 50 per cent of its revenue from major blue chip clients, more recently Capital has made a concerted effort to grow this part of their customer base, so to have almost 80 per cent of earnings tied to big mining houses has to be seen as a win.

Fardell mentions another element of this strategy: with some clients holding long-life assets that could keep producing for decades, doing good work oftentimes means being kept on board for years.

“As the mine grows, we tend to grow with the customer.”

The age of Capital’s fleet is very young by industry standards, a state of affairs maintained by the constant addition of new rigs. The last half saw six new rigs added and one retired, and plans for more of the same in the second half.

The company, founded in Tanzania “because the founders had a lot of experience in Africa, they knew the market and they had established relationships with people who ran mines in certain countries in Africa,” says Fardell, has carved a niche for itself with the stated strategic vision of ‘offering first world service in developing markets’

Rudd says that servicing developing nations is a core competency.

“We’ve developed the capability of entering into remote locations in emerging and developing markets to set up operations to service clients, we know how to do it.”

“The key is supporting and providing efficient logistics to your operations,” says Rudd. “We specialise in that.”

While Rudd reiterates the youth of the fleet and the safety culture as important points he points also to the importance of “attracting, training and developing our staff which includes, in all of these emerging markets, a large proportion of local nationals in each country where we operate. Community relations are quite a big deal in the areas we work in.”

This half has seen Capital take on underground drilling for the first time, a new service that Rudd sees as an additional means of giving clients excellent service.

It’s another field in which Capital Drilling is sure to excel.

“The founders started the company in 2004 with a couple of rigs,” says Ferdell, “and now we’re a financial success with 90 rigs, 1500 employees and still coming out with record results.”