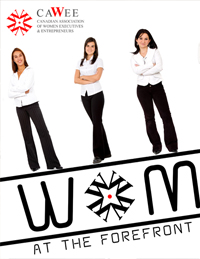 Decades have seen Canadian women come a long way in the business world. Many have worked hard to move up the professional ladder, earning well-deserved senior positions or starting their own successful businesses. Celebrating and strengthening those achievements is the Canadian Association of Women Executives and Entrepreneurs (CAWEE).

According to Beth Parker, President, Toronto-based CAWEE is one of Canada’s oldest networking groups, founded in 1976.  As its name suggests, CAWEE serves both female executives and entrepreneurs representing any and all industries. “We’re a very diverse group,” says Parker. “We have lawyers, accountants, image consultants, coaches, and real estate agents. The list goes on and on.”

Diversity is seen in more than just industry, the membership also brings women from different backgrounds and stages in career. “The age range is 26 to about 60 years old,” says Parker. “It’s impressive, because there aren’t many groups with that kind of range, unless it’s a family reunion!”

As for the number of members, CAWEE has about 100 women. It might not sound like a lot, but CAWEE doesn’t believe in promoting numbers for the sake of it. First, the association is about building meaningful, long-term relationships within the group. And second, there are criteria for membership to narrow the scope of networking to a certain professional level.

CAWEE women are leaders in their fields with reputable professional networks. The executives typically hold mid- to senior-level executive positions within their company, and the entrepreneurs are usually the sole proprietor of their business with at least four to twelve employees. “Our membership tends to be women who are pretty established,” says Parker. “If they are independents, it’s because they’re professionals like chiropractors or consultants.”

So as not to limit networking access to other professionals, CAWEE has eight affiliate organizations that they feel complement the association. “We connect with those groups and share event information,” Parker adds. “Altogether, the group is over 800 people, so we have access to a lot of networks.”

Creating opportunities
CAWEE exists as a group to empower women and bring about opportunities through networking. “Our particular brand of networking is what we call relationship networking,” Parker explains. “There are a lot of networking groups that are impersonal and sales driven. You give someone a business card and you have to come back with a certain number of referrals. What we have done is help women build relationships first, which makes networking more effective.”

Parker believes relationship networking is a natural extension of what women tend to do regularly on a social basis, so why not apply it to business development? “I think women really grasp the relationship-building part,” Parker says. “They are patient with the idea that you have to get to know someone before you refer business to them. Women are willing to put the time in.”

“Don’t get me wrong, we network with men too,” Parker continues, “but CAWEE offers a different dynamic. In terms of referrals, everyone knows women talk. I can be at a CAWEE meeting and find out who is the best hairdresser, as well as who would be good to fill a CFO position for one of my clients. Women pay attention to all of that stuff. On top of that, they offer strong and trusted referrals, which are really valuable in business.”

Parker discovered first-hand the benefits of relationship networking, when she joined 10 years ago. “I had worked in a senior position at a not-for-profit organization for many years,” she recalls. “When I decided to set out on my own, I wanted to focus on the corporate world. It was interesting because I came out of that job highly qualified with connections all over the world, but I didn’t know anyone in the corporate sector.”

“I had to start from scratch, which was very difficult,”” she continues. “I got some good advice to join networking groups, so I joined about three associations and CAWEE was one of them. I liked CAWEE and got really involved in the group. Over time, I began to realise most of my clients, resources and referrals were being drawn from the women at CAWEE. At one point, I traced 75 per cent of my clients back to a connection at CAWEE.” Needless to say, Parker is now a successful business owner. As a communications consultant, she helps other business owners and senior managers with their key messaging and marketing.

Events
Aside from building one’s list of contacts, generating sales leads and offering trusted referrals, CAWEE also offers its members the opportunity to exchange ideas, advice and support from highly experienced executives and entrepreneurs in a fun environment.

Once a month, the association hosts a Breakfast Club, during which people introduce themselves and listen to a short presentation from a member. “The event for meeting and getting to know other people,” says Parker. “It’s a good way to try us out and see what it’s like.”

CAWEE also has four or five Lunch and Learns every year that are for professional development. “We bring in outside presenters to teach on topics that interest our members, such as presentation skills or negotiating with bankers,” Parker says. “They are networking events too, but they are mostly for development, to discuss common business issues and trends.”

Longer and more relaxed events are CAWEE’s evening affairs, allowing for more personal time. “Professional women come to our events and have fun, which we don’t allow for ourselves very much,” Parker smiles. “They’re good for bringing clients to.”

In between events, CAWEE keeps in touch with members through newsletters.

Paying it forward
CAWEE has a bright future because the women involved the association have one, too. By strengthening their relationships and building their businesses, Canadian women will only continue to be recognised as capable leaders in their industries.

“Our members are strong, successful women,” says Parker. “And since we’re focused on relationships and not speed networking, we know our women are interested in other people and helping to build their businesses, too. Our association is about paying it forward.”