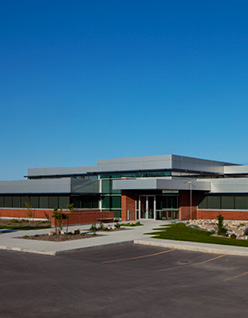 Building a world of difference

A general contractor specializing in concrete construction rehabilitation, CCR Construction began in 1998 and has grown with the times, its capabilities and capacities becoming more expansive.

Based in Regina, and serving the entire province of Saskatchewan, CCR Construction completes projects across various sectors, from commercial, to industrial, to institutional.

“Probably 75 per cent of our work is in institutional and commercial. Institutional is predominant from the perspective of schools, courthouses, hospitals, etc., but we also do many different types of corporate offices and administration buildings,” Trevor Bagnall, President of CCR Construction, told The Canadian Business Journal.

CCR Construction has an impressive portfolio of projects across Saskatchewan. Among those is its major project partnership with BMO and Corporate Contracting. Recently rebranding from Bank of Montreal to BMO, CCR Construction worked alongside the financial institutional to renovate 16 bank branches in Saskatchewan, everything from updating signage, to carpet, to countertops, and more.

“It was an interesting project because they rolled it out right across the province,” Bagnall commented.

Currently, CCR Construction is completing a major renovation of the courthouse in Weyburn, Sask. As a provincial heritage building, the Weyburn Court House must be renovated in light of its original practices—from materials, to look, with a great emphasis on detail.

“The renovation is for accessibility and re-life,” Bagnall explained. “We’ve revamped the entire building from top to bottom, adding an elevator, all new interior finishes, all new mechanical and electrical, and rehabilitated exterior finishes.

“It is a very interesting project from the perspective that it is a heritage site.”

The Oskana Centre, of Regina, meanwhile, involved the construction of a new 20,000 square foot institutional building, equipped with security spaces. A halfway house for Corrections Canada, the Oskana Centre project included everything from offices to interview rooms and cells, being very aware of security nuances of the structure, including internal security, video security, and card access security.

Additional projects completed by CCR Construction include the St. Joseph’s Hospital Renal Dialysis Unit of Estevan, the White City Town Office, the Emmanuel Lutheran Church of Southey, the Lakeside Nursing Home of Wolseley, as well as commercial projects for TD Bank, Sand Hills Credit Union, and The Medicine Shoppe. Another project, the Asset Management Facility of the City of Regina, a 10,000 square foot commercial office building, is described as “architecturally pleasing.”

And while most of Canada, and the world, was feeling economic pressures, the same cannot be said for Saskatchewan. The province is booming financially and the global recession is not impacting Saskatchewan. Rather, this is some of the busiest times for CCR Construction.

“It had a few months when it dipped with the big announcements in the United States, but the reality in Saskatchewan is that it is predominantly resource driven, our economy has not been in recession at all,” Bagnall said. “Our economy has been full steam ahead, so it has been quite the opposite.”

In fact, with the strength of the local economy, there is currently an influx of out-of-province companies operating in Saskatchewan, only upping the demand for local building and construction.

This has led CCR Construction to focus even more so on what has made it competitive and successful. Bagnall concluded, “In the construction industry, many sub-contracting companies have come in from outside areas, so we’re staying efficient and competitive. We’re quite lean and small. We’ve been in this environment for our entire lives, so our real advantage is that even though we have the capacity to do larger projects, we’re small, personable, and we have good relationships with our clients and our sub-contractors.

“Being fair and reputable, it helps us to always be competitive and to know where we can give the best service with the most competitive cost. We’re finding efficiencies, so we continue to provide a fair service for a fair cost.”