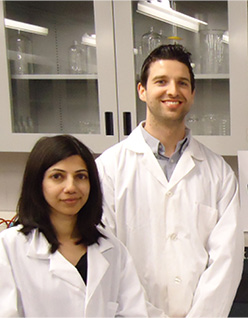 As part of the Bioindustrial Innovation Centre located at the Sarnia-Lambton Campus of the University of Western Ontario Research Park, Cennatek works to accelerate the growth of Canada’s bio-economy and create a bio-hybrid chemical cluster in Sarnia. “Our objective is to assist Canada’s emerging bio-economy through research and analytical support,” emphasized Dr. Nick Ruzich, Director of Technology Development, Cennatek.

“Our model is to reach out to local Ontario small- and medium-sized companies who are doing their own innovation and research but need that partner to have access to analytical capabilities, additional knowledge, and industry networking,” Rahbari told The Canadian Business Journal. “In addition to technical support, we help link different companies and developmental projects together and, more importantly, to funding opportunities.”

Shortly after Cennatek’s establishment in 2008, the company worked on a study led by Dr. Don Hewson, Managing Director of the Research Park. The study, titled “Report on Energy Crop Options for Ontario Power Generation”, was commissioned by the Lambton Generating Station and illustrated the feasibility of Ontario’s agricultural sector to sustainably produce 8.75 million tonnes per year of energy crops as an alternative fuel to coal for electricity generation.

The nutrient content of agricultural-sourced biomass poses challenges to the combustion process. The high concentration of nutrients such as alkali metals (potassium (K) and sodium (Na)) and alkaline earth metals (magnesium (Mg) and calcium (Ca)) in agricultural residues cause the formation of deposits and clinkers in boilers and fouling of heat exchangers. The overall result is significant reduction in the boiler efficiency and increase in maintenance costs.

Wood chips and biomass pellets produced from forestry residues have lower concentrations of these nutrients and as a result they have been widely used around the world as an alternative to coal in heat and electricity generation. Canada’s forestry industry currently exports about 2 million tonnes of biomass pellets to Europe annually. The current annual European demand for biomass pellets is about 15 million tonnes. According to most projections European demand for biomass pellets will grow to around 60 million tonnes per year by 2016. This rapid growth in demand provides an excellent opportunity for the Canadian agricultural sector to produce fuel pellets for export. In order for agricultural producers to benefit from this opportunity, they need to address the quality issues related to high nutrient content. The agricultural industry also needs to demonstrate that it can produce large volumes of consistent, controllable, high quality fuel pellet, comparable to the forestry industry.

In 2009, Cennatek took on the challenge of overcoming this inherent “technical barrier” and launched a research project to develop a process that will improve the quality of agricultural residues as a source of fuel pellets. The project led to the development of the patent-pending BioLiNE™ (Biomass Liquid Nutrient Extraction) process.

“Our technology is an equalizer, producing high quality biomass fuel pellets regardless of the type of crop used,” Rahbari said. “Through the BioLiNE™ process, we extract the nutrients that are the main cause of variability in the quality of the fuel.”

The BioLiNE™ process developed by Cennatek takes the nutrient extraction process one step further by recycling the extracted nutrients. Through additional refinement of the nutrients, the BioLiNE™ process is used to produce a line of commercially viable liquid fertilizers that has proven to be in demand by local Ontario farmers.

The all-natural liquid fertilizer consists of 100 per cent water soluble nutrients, with no solid particulates. The company has developed several formulations including a 5-15-5-plus (NPK) formulation for use as starter fertilizer for cash crop farmers in Ontario. The formulation includes micronutrients to provide the best all-around fertility.

This efficient process extracts biomass nutrients through mechanical and heat energy with the use of only water—no chemicals or solvents are involved. Upon extraction, these nutrients are then recycled to create liquid fertilizers. Canadian farmers spend about $2.7 billion on fertilizer per year and liquid fertilizers constitute about 40 per cent of the overall fertilizer market. The five great lakes region states of Wisconsin, Michigan, Illinois, Indiana, and Ohio consume 5.1 million tonnes of liquid fertilizer annually. It’s a lucrative market and one that is attractive for Cennatek.

To commercialize the BioLiNE™ process, Cennatek has partnered with Quality Fertilizers Incorporated (QFI), an Ontario-based fertilizer manufacturing company. Cennatek plans to construct a demonstration production facility co-located with QFIs fertilizer production facilities in Shakespeare, Ont. The proposed site will have the process located in Perth County, heart of Southwestern Ontario, with 90 per cent of the county classified as prime agricultural land, Perth County is home to 2,438 farms, and 498,159 acres of farmland with $558.5 million in farm revenues (2006 receipts). The proposed demonstration facility will have the capacity to produce 40,000 tonnes per year of fuel pellets and 5,000 tonnes per year of liquid fertilizer from agricultural residues.

“The farmer wins by saving input costs and by increasing revenues. We win by securing markets for our liquid fertilizer as well as securing feedstock for our process. We create local jobs and local markets. We’re developing the markets to show the economic merits of our technology in hopes of disseminating the BioLiNE™ technology globally,” Rahbari summarized.

Canadian farmers have increased productivity by almost 50 per cent over the past 30 years, however, since 1990 average operating margins for Canadian farmers has gone down while total operating expenses have increased. Fertilizer and fuel have been major contributors to this increase in operating costs. Major contributors to the increase in operating costs to farmers are the cost of fertilizer and fuel. Limited investment in increasing production capacity, coupled with higher than anticipated growths in demand, and high dependence of the industry on energy costs have resulted in high levels of volatility in fertilizer pricing. According to a presentation by Fertecon to Members of the Canadian Parliament, without mineral fertilizers, 2 billion people would starve.

“There is huge capital and environmental cost associated with the extraction, production, and transportation of these mineral fertilizers. Recycling these nutrients from agricultural products prior to their conversion into bio-fuels such as bio-ethanol, bio-diesel, or biomass fuel pellets is a fraction of the cost and has all the associated environmental benefits,” Rahbari added.

Like worldwide oil prices continuing to climb, so too is the value of nutrient recycling, making Cennatek competitive in the market. Rahbari concluded, “We understand that we are a small company. We have a very interesting technology that we are trying to commercialize, and we have been supported in our development by the Ontario Federation of Agriculture. We are at the stage now where we are raising the financing in order to commercialize our technology and expand our own operations.”