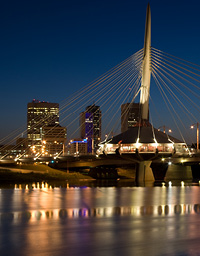 A Huge Economic Benefit for Winnipeg

Manitoba’s provincial government, the federal government and the private sector began collaborating and working in unison dating back to 2008 to fund the CentrePort Project in Winnipeg with a total combined initial investment of just over $212 million. It officially opened in November, 2009 and continues with a widespread expansion.

Located on Winnipeg’s James Armstrong Richardson International Airport, the initiative involves using the airport and surrounding land as a hub to import goods from Asia and Europe and then distributing those same goods throughout North America by highway, rail and air to their final destinations.

Developing Manitoba’s inland port has the potential to grow Manitoba’s economy by leaps and bounds by taking much better advantage of strong transportation assets and the province’s strategic, centralized location.

CentrePort Canada offers investors a wide range of savings, including combined federal and provincial/state corporate income taxes that are 33 per cent lower than in the United States.

The primary intent of building here is due to Winnipeg’s geographic centralized location in North America. It’s an outlet to substantially boost economic development, with added hope a dynamic partnership will evolve between the two levels of government and the private sector that could lead to additional joint projects in the future.

CentrePort includes the use of 20,000 acres northwest of the airport for a gigantic trucking and rail depot linked to runways with aircraft coming and going from all over the globe. There remains more than 2,000 acres of land ready for new development and about 420,000 square feet of industrial space available in existing warehouse facilities.

“Centre Port is definitely attracting the attention of both local and out of province expansion within the Winnipeg transportation industry,” says Constantinides.