The history of Ceres Global AG Corp is quite unique for this type of industry. Most of its competitors are more than a century old, but Ceres has only been in business for a decade and is definitely making its presence felt.

After posting less than expected potential with its initial investors a new investment team took over the reins about three years ago and it’s been nothing but vastly improved results ever since. New members were selected for the board of directors and a solid commitment was made to develop a real grain and oil seed merchandising company through the asset infrastructure that was available.

Ceres’ Grain Storage unit is anchored by its 100% ownership of Riverland Ag Corp., a collection of grain storage and handling assets in Minnesota, New York, and Ontario. Particularly exciting is the ownership of 1,500 acres of land at Northgate, Saskatchewan, which stands to be an extremely vital location for the company’s growth plans. The Commodity Logistics unit is focused on the development of a Commodity Logistics Centre in Northgate.

The Canadian Business Journal recently spoke with Ceres Global AG Corp President Robert Day from his office in Minneapolis about the company’s impressive growth and its initiatives for the future and specifically with respect to the Saskatchewan facility.

“At our core we are a grain and oil seed trading and merchandising company. We have six different locations and we’ve got some third party locations as well,” begins Day. “The Northgate elevator is a big location for us. We also have a huge facility in Duluth, Minnesota, where we can export through the lakes. We also have a facility in Port Colborne, Ontario and three in the Minneapolis area.”

The assets at Riverland had been underutilized for many years, which was a problem that required correcting. With those new procedures in place there has been a major turnaround that has allowed Ceres to maximize the capacity utilization of the location’s facilities. The new direction set out by Day and his executive team has effectively guided the company into a cash positive position and there are still a couple of additional structural moves that stand to offer even larger benefits to the company and its shareholders alike.

“Over the last two-and-a-half years we’ve gone from a company that would handle maybe half a million tons a year of agricultural products to 4 million tons,” Day proudly says. “Because of the nature of our asset infrastructure we procure a lot of our products in Canada and the upper Midwestern United States, but a lot of our customers are international because of just where those products naturally flow to the best demand we can find.”

The Northgate opportunity in Saskatchewan represents about 60% of the investment on the Ceres’ balance sheet and a rail and road infrastructure investment has proven to be significant. There is a high-speed grain elevator, a specialty grain elevator to handle specialty products and there is a fertilizer warehouse.

“We are trans-loading propane and we’re handling a host of industrial products for the oil field industry and we’ve got plans to add more product lines to that location,” says Day.

At Northgate, the location itself offers a plethora of other opportunities for Ceres to monetize value. There is also the benefit of it being the only location in Canada with direct access to a U.S. railroad unimpeded by Canadian railroad. When Canadian products are being sent either to a U.S. destination or into a U.S. export gateway, there is no question that Ceres has the most efficient mode of transportation to get those products to customers anywhere in the world.

“In addition to what we are doing with grain, we can provide a cross-border logistics solution to a host of different industry sectors; that’s our logistics business at Northgate. We’ve got about 8 miles of track infrastructure and that consists of two 120-car loop tracks and several other smaller tracks. We have an excellent opportunity to build up this logistics hub that we are talking about,” says Day.

“The grain elevator is the first thing we did. We own that, we operate it and that’s core to our business. But now we are looking to expand as more of a logistics provider to other companies. The dry fertilizer warehouse was an extension of that. We operate it, but 100% of the product that goes through there is for Koch Industries. It’s really Koch’s breakthrough into Saskatchewan,” continues Day.

Ceres also owns a 25% interest in SSR, which is a 132km railway line that extends from Richardson, Saskatchewan, southeast of Regina, to Stoughton, Saskatchewan.

Ceres exports between 15 million and 20 million bushels of grain on an annual basis.

“We were very happy with the volume in the first full year of operation,” says Day.

One of the primary mandates for Ceres is looking to source wheat and grain from farms in southeastern Saskatchewan for loading and shipment through Northgate. Day and his team are pleased with the results to date, having surpassed expectations on products such as canola, durum, oats and some of the specialty products, however there has been a bit of disappointment with wheat, which can be attributable in part to outbound rates.

A great deal of success with international destinations has been realized for Ceres, including Japan. It’s a partnership has worked extremely well because the Japanese companies don’t own infrastructure in Canada but they do own port infrastructure in the United States and for that reason they’ve been very drawn to an origination supply chain that they can control. Mexico has also proven to be a salient destination and the company is also taking a sizable amount of product into Duluth and exporting it to Italy and northern Europe. A great deal of this industry is about the efficient physical movement of product. Latin America could be a potential next region to target, both the Caribbean and into South America.

“I think that’s probably the next area of growth for us but we’ll also continue to grow through the existing destinations that we have,” says Day.

Ceres Global AG has established impressive agriculture volumes throughout its many international networks. Day wants to maintain that high volume and be even more efficient, which in turn will increase profitability. The first step was establishing the customers, the trade flows and the relationships.

“Now we need to do it free of mistakes and be more profitable,” says Day.

It is also the parallel hope and expectation of Day that Ceres will be able to accelerate the buildout of its non-agriculture business, specifically at Northgate and that includes bringing in attractive partners to fully maximize the value of the site.

“We have several initiatives in the energy and industrial products space at Northgate that we think are really going to transform that location,” adds Day. “The main objective for us is to make both its agriculture commodity trading business and the logistics business be in a position where they are generating attractive returns for shareholders.”

The start-up part of the business is about fully developing opportunities. In dealing with the turnaround aspect of the business it’s about restructuring the company’s asset footprints and that includes some further changes to be implemented at certain key locations. Ensuring each location right-sized is an initiative that Day and his team want to have in place over the next 12 to 18 months.

“By 2020 I’d like to be a growing agricultural trading and merchandising business that increases it’s origination of Canadian upper Midwest U.S. products and consistently reaches out to those chosen customers in the United States and around the world,” says Day. “We want to move up the value chain and to incrementally grow and continue to meet strong return on investments.” 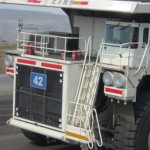