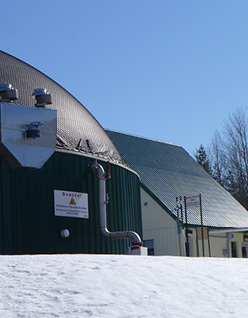 Reducing waste and creating energy. That is the basis behind CH Four Biogas Inc., pioneers in the Canadian biogas technology, using an anaerobic digestion system in the industrial, municipal and agricultural sectors.

Whereas biogas technology is embraced in Europe, it’s an emerging technology in Canada, and regulatory bodies are only now really starting to embrace it.

The Canadian Business Journal had the opportunity to discuss the emerging technology with Benjamin Strehler, CEO and President of CH Four Biogas.

“In a nutshell, biogas is a recycling technology,” says Strehler. “CH Four Biogas is taking the anaerobic digestion system [a series of processes in which microorganisms break down biodegradable material in the absence of oxygen], and mimicking it in a controlled environment, essentially breaking down organics and making use of them.”

“Our technology uses a biological process known as anaerobic digestion to produce a combustible gas from the decomposition of organic material.  This biogas is composed of roughly 60 per cent methane and 40 per cent carbon dioxide; the co-product is digestate which is used as organic fertilizer, livestock bedding or compost.”

Anaerobic digestion produces two main useful by-products. The first is biogas, which is used as a fuel to create electricity and heat in a combined heat and power co-generator, boiler or other vessel at the site of origin. Alternatively, the biogas can be upgraded to create natural gas (Biomethane) for use or for sale.

The second is digestate, which is land applied primarily as a fertilizer.

CH Four Biogas gets its organic substrate (waste) from multiple origins, including agricultural (manure, spoiled tillage etc.), the processing industry (food by-products), and municipal (sewage), and operates its anaerobic systems at the source.

“Traditionally that is landfill or compost where there is not much energy and no recycling,” says Strehler. “Here you can make energetic use and recycle the nutrients back into primary production. These are the two very big advantages of anaerobic digestion, first we take energy out of the waste, and second you bring it in a form that is suitable to recycle it into agriculture.”

The system reduces organic waste into methane, which leaves captured methane gas which is then upgraded to a natural gas. It’s literally making money out of mulch, energy out of garbage.

BH Four Biogas is headquartered in Ottawa, with operating plants in Ontario, New England, New Brunswick and project developments in Nova Scotia and British Columbia by the end of the year. The decentralized model works best for biogas because of the relatively low energy density of materials in comparison to oil, for example. “Transportation is a main cost factor so when we capture the organics on the farm where they are produced, we don’t need to transport them but can process it right on the farm and bring it back to the field. The idea is that we are having multiple sites to bring these organics to work. It is crucial we have high reliability to keep the organics moving.”

With each system built to specific substrates of the customer, CH Four Biogas operations produce energy in the range of 100 kilowatt to a megawatt, with the majority producing in the 400 to 500 kilowatt range. Currently, a total of over 5MW electrical capacity stems from CH-Four biogas plants.

The advantages of biogas are immense, including economically, which sees the system pay for itself after five to seven years, and has a lifespan of 20 years.

The anaerobic digestion system is proven to reduce pathogens by 99 per cent. Its environmental advantages extend beyond recycling organic residuals, but the generated fertilizer replaces the need for and cost of synthetic fertilizer.

“The main revenue stream is the sale of electricity to the grid,” says Strehler. “Other revenue can come from tipping fees for off-farm organic material, as well as the savings realized by operating a biogas system, for example decreased synthetic fertilizer costs because of use of digestate, decreased herbicide use because of weed seed destruction, and decreased bedding costs through solids separation of the digestate, as well as improved water resource protection through pathogen destruction.”

Currently, CH Four Biogas is leading by example, challenging regulatory bodies to evolve their approach to biogas sales. Simply put, Ontario is lagging behind other regions, with approvals taking up to 10 times what they take in the U.S.   “Our challenge is the access to the grids to electrical or natural gas grid, and getting the required environmental approvals. The regulatory bodies aren’t familiar with biogas systems and to get approval for those biogas plants can be cumbersome and time consuming, even though biogas systems improve the environmental footprint for both agriculture and the organic waste management industry.”