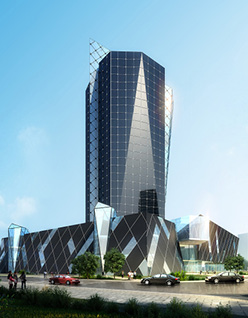 For over 25 years, the Chamberlain group has worked together in a collaborative environment, offering clients a full suite of architectural design, construction management, and project management services. Clients include government and public service organizations, high profile corporations, and single project entrepreneurs. Today, Chamberlain, literally, has a project in every province, except for P.E.I.

This successful collaboration began when architect Brian Chamberlain decided to purchase a construction company. “I wanted to understand everything about the construction process, so I could be a better architect. I worked as an estimator and site supervisor until I understood the process well enough to hire others to do those jobs. Every lesson I learned in construction taught me how to design better, more practical, affordable buildings,” adds Chamberlain, whose company Chamberlain Construction Services Limited now builds 85 per cent of the projects his other company, Chamberlain Architect Services Limited, designs.

Chamberlain’s group of companies seamlessly integrates architectural design, construction management, and project management services, creating a single source for clients’ building needs. This highly effective system allows the owner, architect and builder to work as a team from the outset. Chamberlain’s preferred process, Integrated Project Delivery (IPD), brings together all aspects of the project from the beginning, creating a consensus-building team. This method benefits the owner by maintaining control and flexibility over the process which results in successful realization of the project’s budget, scope, image, quality and sustainability goals.

On the topic of project delivery, Adrian Mauro, Chamberlain’s President is adamant. “Traditional Project Delivery Methods are cumbersome and expensive. The owner hires an architect to design the project. Then the design is bid on by general contractors under a separate contract. If the bids are higher than anticipated, the owner then has to have the architect redesign the project.” This disjointed approach sets up an adversarial relationship between the owner, architect and builder, often increasing the price for the owner in the process.

Chamberlain believes that the time for collaboration has come. “Today, there is a very important shift in attitude, a paradigm shift if you will, occurring in the design and construction industry,” says Chamberlain. “People don’t seek adversarial situations, they seek collaboration. While most other industries have increased efficiency and productivity over the past 20 years, the design and construction industry has, in fact, become less efficient.”

Staying ahead of the competition requires a firm grasp on the latest technological tools. One of the lethal weapons in the Chamberlain arsenal is Building Information Modeling (BIM) which involves the generation of a 3D digital representation of the project’s physical and functional characteristics. This lifelike model helps to facilitate decision-making about a facility from earliest conceptual stages through design and construction.

Over the years, Chamberlain has created some of Canada’s most recognizable landmarks and some pretty impressive international ones as well. A former Air Force pilot, Chamberlain works closely with the Canadian aviation industry. Chamberlain’s favourite projects include the Canadian Warplane Heritage Museum which features the aircrafts used by Canada’s military since the beginning of the Second World War, and the Crash Fire Rescue Facility at the Toronto Pearson International Airport. Oh, and that beautiful blue diamond-inspired control tower cab you see when you land at the Toronto Pearson Airport? Chamberlain designed and built that too.

The Juno Beach Centre in France represents another notable architectonic project of Chamberlain’s. The only Canadian museum in Normandy, the Juno Beach Centre showcases and pays homage to the war effort made by all Canadians during the Second World War and celebrates the beautiful country Canada is today.

Chamberlain’s most recent projects include the 22-acre community campus at Niagara-on-the-Lake, consisting of a library, fire hall, museum and community centre, as well as a Marriott/Hilton hotel campus at the Calgary Airport. All together, the company has built some 10,000 hotel rooms and over 2,000 restaurants.

Chamberlain’s signature style can also be found in several Asian markets. Northwest of Shanghai, Chamberlain designed a resort hotel and spa of over 1 million square feet, worth approximately $250 million. The company also created the design for the iconic Black Diamond Project, a highly innovative high-rise headquarters for a power company in Taiwan. In the north eastern city of Dandong, Chamberlain designed Huacai International Centre. The 3.8 million square foot centre is a mixed-use development which includes hotels, offices, residential condominiums and a shopping mall.

To accommodate its extensive global clientele, Chamberlain currently employs over 70 key staff, consisting of project managers, architects, construction managers, estimators, technologists, construction coordinators, site superintendents, and additional support staff. The Chamberlain professionals consider projects not only in terms of design or construction tasks, but as a whole and cohesive project with the ultimate goal of meeting the owner’s needs. “Our five pillars of IPD, BIM, QMS [quality management system], LEED and LDC [lean design and construction] are the foundation of a new and exciting approach to design and construction which eliminate the inefficiencies of the past by arriving at the right decisions quickly,” says Chamberlain.

In the past, design and construction have been perceived as two separate and distinct processes. At Chamberlain, the imagined structural barrier between the two has become a quaint myth. The reality is that whenever you make a design decision you have just made a dollar decision. This is why the full integration of design and construction is essential in an atmosphere of trust and respect within the owner, architect and constructor team.