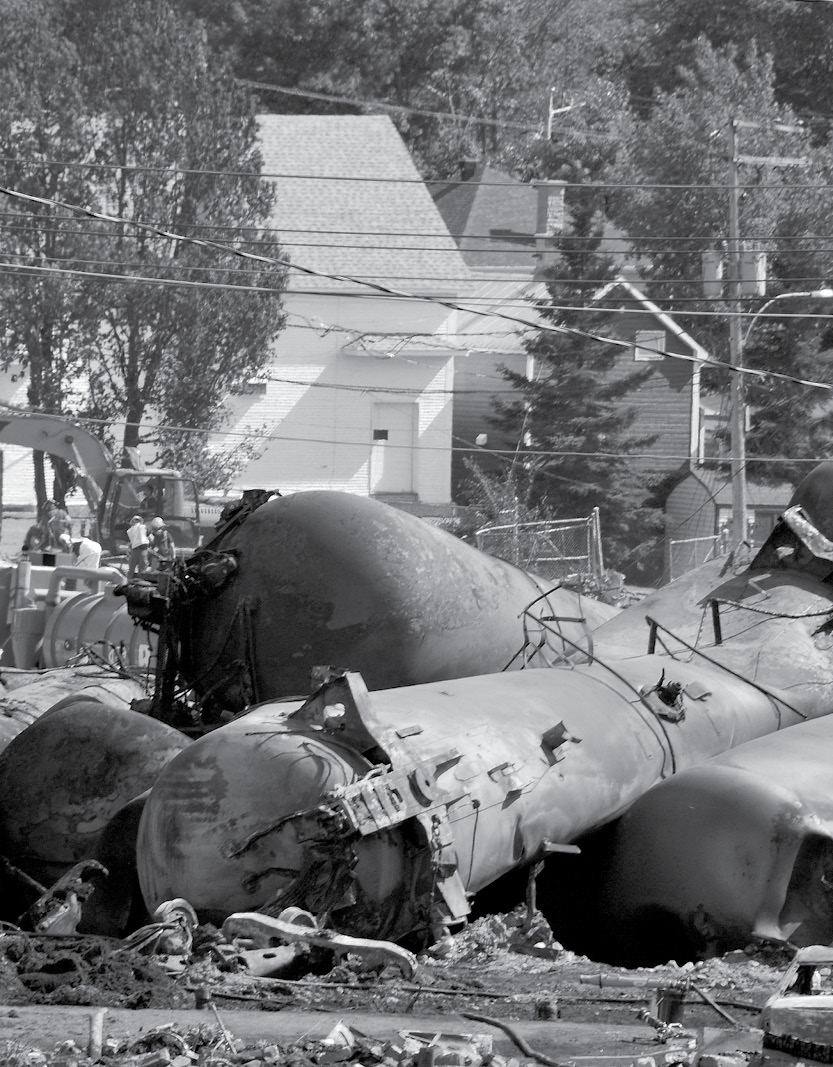 It’s rather mind-numbing to contemplate that prior to now, it was not against regulations to leave an unattended freight train carrying hazardous or otherwise potentially dangerous cargo unsupervised for any considerable amount of time.  Something seemingly so obvious, yet there were no rules on the books to enforce it.

Once again, policymakers are in the position of taking reactionary rather than precautionary moves. The new measures announced by Transport Canada to increase rail safety will hopefully prevent such a tragedy from occurring again.

A lack of braking pressure seems to be at the core of the problem as to why a train parked overnight 10 km outside Lac-Mégantic lurched into motion in the early hours of July 6 and gained speed on a downslope before derailing and crashing through the heart of the small village of 6,000, right through the downtown core, obliterating everything in its path.  As of this publication, 47 were assumed killed, with 42 having been positively identified.  Five others remained missing, but are presumed to have died in the fiery blast.  The heat was so intense that officials say it’s likely their bodies were vaporized.

Although the official cause of the accident in Lac-Mégantic remains unknown at this time, Transport Canada is moving forward to build upon the safety advisories submitted from the Transportation Safety Board and further enhance existing safe railway operations and the security of railway transportation.

Now in effect, the emergency directive requires all rail operators to:

Ensure that no locomotive attached to one or more loaded tank cars transporting dangerous goods is operated with fewer than two qualified persons on a main track or sidings;

Ensure that no locomotive attached to one or more loaded tank cars transporting dangerous goods is left unattended on a main track;

Ensure, within five days of the issuance of the directive, that all unattended controlling locomotives on a main track and sidings are protected from unauthorized entry into the cab;

Ensure the directional controls, commonly known as reversers, are removed from any unattended locomotives, preventing them from moving forward or backward, on a main track or sidings;

Ensure that their company’s special instructions on hand brakes are applied to any locomotive attached to one or more cars that is left unattended for more than one hour on a main track or sidings;

Ensure that, in addition to complying with their company’s special instructions on hand brakes referred to in the item immediately above, the automatic brake is set in full service position and the independent brake is fully applied for any locomotive attached to one or more cars that are left unattended for one hour or less on a main track or sidings.

The safety of Canadians is Transport Canada’s top priority. The department is committed to working with the rail industry to examining any other means of improving rail safety.

Transport Canada has been in contact with the railway industry, and in particular with CN, CP and the Railway Association of Canada (RAC), to work together to promote the continued safety of Canada’s rail system.

The majority of railways maintain a culture of safety and security, as shown by the notable decline in derailments and train accidents over the past few years.

Transport Canada inspectors will continue to work in cooperation with the Transportation Safety Board as it conducts its investigation.

Transport Canada inspectors are at Lac-Mégantic determining whether there has been non-compliance with regulatory requirements.

Railway safety regulations exist to ensure the safety and protection of the public. If these regulations were not followed, the department will not hesitate to take action.

Lisa Raitt certainly wasn’t given an enviable task when Prime Minister Stephen Harper recently tapped her to take over as Minister of Transport in the wake of this national tragedy.  Raitt met with elected officials from the Eastern Townships, including several mayors, to listen to their concerns regarding rail safety in their respective communities and respond to their questions, as a beginning of an ongoing dialogue.

“The tragedy in Lac-Mégantic will be imprinted in the collective memory of generations to come, “ says Raitt. “We continue to mourn the loss of life following the accident in Lac-Mégantic. We must never forget the lives lost and the entire community affected by this tragic event.”

The elected officials from the Mégantic region that met with the Minister included Bernard Sévigny, Mayor of Sherbrooke, Pauline Quinlan, Mayor of Bromont, Vicki May Hamm, Mayor of Magog, Arthur Fauteux, Mayor of Cowansville, Jacques Demers, Mayor of Sainte-Catherine-de-Hatley, Josef Hüsler, Mayor of Farnham, and Maurice Bernier, the Préfet of the Regional County Municipality of Le Granit.

“The concerns of the mayors are quite legitimate — they want to ensure safety in their communities, balanced with the needs of their economy. This is the goal of the federal government as well,” added Raitt.

Although the primary cause of the July 6th accident remains unknown at this time, Transport Canada continues to collaborate in the ongoing investigations. The department’s inspectors are on site to determine whether there has been non-compliance with regulatory requirements.

The unspeakable tragedy has been the catalyst for a number of lawsuits as well as the intense police criminal investigation.

Quebec and the federal government have each promised $60 million for emergency assistance and longer-term reconstruction help for the town.

Prime Minister Stephen Harper, Gov. Gen. David Johnston and Quebec Premier Pauline Marois were among those on hand for the memorial service honouring those who had lost their lives in one of the most horrible ways ever imaginable.