CBJ — Chinese telecom company ZTE Corp has announced a new board of directors to meet demands of doing business with the United States.

The major shakeup comes on the heels of a $1.4 billion deal with the United States.

The United States imposed a harsh seven-year supplier ban on ZTE in April after it broke an agreement to discipline wayward executives who conspired to evade U.S. sanctions on Iran and North Korea.

The management overhaul was among the conditions laid out in the settlement deal to have the ban lifted. 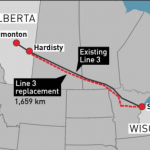