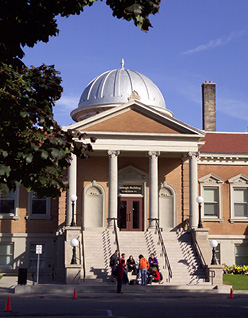 Perhaps Chris Friel, Mayor of the City of Brantford, put it best.

“We are a community that has a rich history and a dynamic future,” Friel said in speaking with The Canadian Business Journal about the many exciting projects and growth streams happening in the city.

To begin, a short history lesson: a southwestern Ontario city of about 90,000, Brantford is a community known for its can-do attitude. For years, the economic base of the city was built off of the local blue-collar manufacturing sector. Ideally situated, Brantford offers an ideal combination of urban and rural living.

Brantford is known for punching above its weight class, with massive economic output outmatching that of similarly-sized cities. It is unique in how much Brantford produces as a community. Unfortunately, the city was hard hit by economic times in the 1980s, and single industries of Brantford’s economic output were lost. However, Brantford then used this experience to its advantage in preparing for the future, becoming more focused in bringing additional small- and medium-sized businesses to the area, diversifying the city’s economic field.

Deindustrialization in the 1970s and 1980s forced Brantford and the local community to reinvent itself. Brantford used its experience with past economic slowdowns to its advantage to curb the effects of the recent recession. Over the past decade, Brantford has done an “exceptionally good job” redirecting, reinventing and refocusing its community overall.

“Through the last recession, we actually fared quite well, but it was because of everything that had happened before that,” Friel summarized. “We kept a nice, steady path, so we were ready for the economic downturn.

“We’ve had some hits, in particularly the automotive industry, such as auto parts and manufacturing, but it wasn’t such a substantial part of our economic output.”

While much of the food production industry takes into account an aspect of seasonal production, the sector serves as a means of local job creation for the Brantford population, creating many labour intensive jobs. The city has also put an onus on advanced manufacturing, returning many manufacturers to employment in Brantford. Mass production may have gone overseas, yet a market still remains for a particular skill set in manufacturing, of which there is an abundance of in the Brantford workforce.

“Attracting those businesses, which helps diversify the market, is starting to pay off already,” Friel said.

Fifteen years ago, Brantford City Council approved a plan to revitalize the city’s downtown. Implementation and project progress followed in 2009. The plan includes a variety of improvements to the city’s downtown, including a campus expansion, expanded retail, and heritage restoration, all of which will create “economic breakthroughs” for the city.

“Brantford is without a doubt the model for revitalization of downtowns, if not just Canada, then North America—we were at rock bottom, to where we are now, which is dynamic and thriving,” Friel said.

Today, the growth has spread throughout Brantford’s downtown, in a variety of sectors, including growth in commercial and residential, causing a ripple effect throughout the entire community. The city’s economic driver used to be in downtown Brantford, but has now generates from that area which also impacts its surrounding areas as well.

A master plan to remake the waterfront of the Grand River has been a substantial undertaking for Brantford. Creating a wonderful tourist attraction for the area, the city has worked to develop a waterfront plan that has generational appeal, looking to create access to the river, as well as protection of the river and source water, while working alongside local businesses in developing the waterfront.

In fact, the Waterfront Master Plan has received a 2011 Award of Excellence from the Canadian Society of Landscape Architects.

Removed from the stress and struggles of the nearby Greater Toronto Area, Brantford remains ideally located to large urban centres, yet surrounded by rural towns and communities. Brantford offers an abundance of lifestyle and amenities.

Looking toward the future, Brantford anticipates “substantial” residential growth, in addition to business growth in both the commercial and industrial sectors. Aggressive and rapid growth is coming to Brantford and the city has prepared to capitalize on these opportunities.

Friel concluded, “We have to make sure that we’re not just creating another structure for urban sprawl, but rather that we’re creating smart, sustainable communities within our community.”