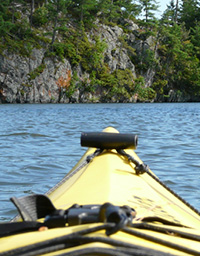 Building for the next generation

To say the City of Kenora is investing in its future would be an understatement.

Five years ago, City of Kenora council drafted its economic development strategy, still being followed today, with the idea of a shift from not only cottage country, but from a pulp and paper town to a city of revitalization. Kenora sees it as a transformation to becoming a destination and lifestyle community, rebranding itself as a friendly community for visitors, small- and medium-sized businesses, and new residents.

Among those new residents to which Kenora is appealing: youth. The goal is to not only to keep its young people in Kenora, but also to attract others to join this new generation. In speaking with Jennifer Findlay, Economic Development Officer, and David Canfield, Mayor of the City of Kenora, the emphasis was cleared placed upon Kenora’s reenergized atmosphere.

“We’re looking at working with our partners in education and training, and looking at ways of keeping local young people here for post-secondary education,” Findlay proudly stated. “We are actively working with some university partners on that opportunity to attract youth, to balance with another Kenora opportunity for 55-plus residential.”

Adding to that, the Winnipeg connection to Kenora is a significant reason for the city’s new outlook. In fact, many Winnipeggers are not only buying property in Kenora, but some have also chosen this Lake of the Woods location as a retirement destination.

“We are reinventing ourselves. The tourism industry has suffered, so a lot has changed,” said Mayor Canfield. “We’re closer to Calgary than we are to Sudbury. The Manitoba and Saskatchewan economies have done so well and we see huge opportunities for people to the west to look at Kenora as maybe a retirement area or maybe a place to get away because of the great outdoor opportunities here.”

Asked about Kenora’s plans for business redevelopment, Findlay responded that the city is aggressively pursuing business and industry. A former mill site has been sold, giving a real opportunity to the community to resurge the site with new business opportunities. Additionally, there will be more residential development occurring around the community.

Fund and grant monies have provided Kenora the financing to rejuvenate its downtown, a revitalization plan has been in place since 2004. Specifically, the city has replaced water structures, sewers, and wooden piping beneath its Main Street. Other measures, including traffic calming, and new landscaping, has made the Kenora downtown centre more pedestrian friendly. More and more, citizens are leaving their cars, strolling the streets, shopping at the shops, and dining at a selection of restaurants.

Among the many thriving industry that gives Kenora its unique appeal, one that continues to grow is its passion for the performing arts. According to Findlay, there has been a “real surge of interest in the arts and culture sector” of Kenora in recent years, with the hope of a new community-based performing arts centre to Kenora within the next couple of years.

Beginning in 2009, Kenora’s focus turned to the $4.5 million redevelopment of its Harbourfront, as a continuation of its downtown revitalization project.  The project sees upgrades to Kenora’s public wharfs and along the harbourfront as well as the installation of a year round tent for special events.  Another big project that is underway, is the redevelopment of Tunnel Island, a 400-acre green space, home to walking trails, with the hope of a future ceremonial ground to for cross cultural ceremonies. Tunnel Island is co-owned by the City of Kenora, three neighbouring First Nation Communities and Grand Council Treaty #3.

“It is a very interesting piece of property. The area was known as the crossroads of Canada, long before roads or bridges.  It was a meeting place, where the First Nations met,” Canfield said. “It has amazing cultural significance, so we want to expand on that and partner with the First Nations here. We see some phenomenal opportunities there.”

Reflecting on its roots

But it cannot be forgotten that Kenora remains a resource-based economy. As Findlay summarized, the city is simply using its natural resources differently.

“One of the advantages that Kenora had was looking at still using the forest, but using it for value-added products and green, sustainable forest practices, so a more modern use of the forest,” Findlay said. “Because of Kenora’s location on Lake of the Woods, we have always been cottage country, using those natural resources, so the area is attractive to cottagers, as it has been for hundreds of years.”

True, Kenora always will be cottage country. Such a claim to fame cannot be forgotten, and Kenora’s visitors will continue to see its beauty of resources through new ways of experience.