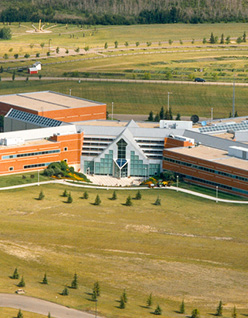 Straddling the border that separates the western provinces of Saskatchewan and Alberta, the city of Lloydminster has grown into a vibrant business centre.

The city is home to a population just short of 30,000 and at 104 years old can boast of a curious history. Colonized at the turn of the 20th century by British immigrants looking to create their own Puritan utopian vision, today the city is a noted regional centre for the agricultural and energy industries.

Lloydminster mayor Jeff Mulligan says, “We have a catchment area with a population approaching 125,000 which is largely created by the fact that we’re 230 kilometres from the two major commercial centres of Alberta and Saskatchewan—Edmonton and Saskatoon.

Mulligan claims it is this distance from either industrial centre that represents the city’s greatest strength and weakness, but that the distance has helped turn Lloydminster into a service centre for the municipalities, villages and towns within a 125 kilometre radius.

In 2009, a study by the Bank of Montreal ranked the city second in all of Canada for small business intensity, and with its unique position on the border between two provinces, the city is able to operate relatively freely in both Alberta and Saskatchewan.

“We operate under one city hall with one charter, but we are licenced to do business in both provinces,” explains Mulligan. “We are the only city in Saskatchewan or Alberta that operates with its own charter, which in theory means we’re a city state as we’re not governed by the Municipal Government Act in either province.

“Lloydminster is also blessed with a younger than average demographic, plus our residents have higher-than-average salaries and disposable incomes,” he adds.

Despite its unique geographical positioning, Lloydminster can often be found high up lists that depict the best places in which to do business in Western Canada.

“Many people and institutions have independently validated us as a leading business destination in the past few years,” says Mulligan. “The Canadian Federation of Independent Business (CFIB) named Lloydminster in its 2009 and 2010 top 10 place in Alberta to do business listings, and also named the city in its Saskatchewan top 10 in 2010.

“Recently we were named as one of the top 25 cities to do business in Western Canada by Alberta Venture, who ranked us in either first, second or fifth place from 2008 to 2010,” he adds.

Perhaps most impressive in its roll call of accolades is being rated by the Bank of Montreal as the second best city in small business intensity in 2009.

According to Mulligan, the city’s combination of the business growth opportunities and its population’s higher-than-average disposable incomes, are just two of the reasons the city is finding itself at the right end of such assessments.

“Along with our younger demographic, we have a low- to mid-range property tax regime,” he notes. “In Lloydminster you can purchase property at a cost a little lower than you would in either Calgary or Edmonton. Business will find the availability of a workforce, as well as easy access to consumers and a work place that can drive margins.”

Leading the city’s strong energy-led economy is its biggest employer Husky Energy. It also accommodates two of the country’s largest credit unions, one on either side of the border.

“From a cooperative or credit union perspective, our small city is quite an anomaly in that we have around $3 billion worth of assets in our two credit unions,” says Mulligan. “In a city of this size it’s pretty much unheard of, but it has done so much to fuel the growth and prosperity of small- and medium-size business for the past 25 years.”

Elected as mayor back in October 2009, Mulligan was the CEO of a financial institution until retiring in April 2009, just months before his poll victory.

“Back then what I saw was that there wasn’t enough professionalism, focus or vision in the area of economic development, so the first thing we did was try to find out what the great economic development models were available to us and see what it was we should have been doing to aid development in Lloydminster,” reveals Mulligan.

As a result of this progressive economic approach, the Lloydminster Economic Development Corporation (LEDC) was established with an independent leadership and a board of directors made up of local business leaders. Its task was to establish a clear strategic vision in the area of economic development.

“From the work of the LEDC, it became clear that branding and awareness were big components of a successful city, and we realized that getting the Lloydminster name onto the market in an advanced way was an extreme priority.”

Dealing with the recession

With the much of Canada still recovering from the global economic crisis, the city of Lloydminster is emerging from the downturn with very few scars.

“We were fortunate that Alberta and Saskatchewan endured the recession better than most,” says Mulligan. “Our house prices and land values probably suffered a 12 to 17 per cent impact, of which 75 per cent has been recovered.

“In many cases, our businesses were operating in an overheated environment prior to the recession, which was placing strain on staff, quality assurance and leadership development. The recession enabled these businesses to focus on these problem areas, and as we emerge from it quite healthy and quite strong, we are finding ourselves in a stronger structural position.

“If someone visited Lloydminster during the recession, it would have been difficult to notice any difference,” he remarks. Despite this assessment, the city did see a dip in the number of building permits issued and a slight reduction in capital spending; but according to Mulligan the recovery was quick and 2011 is gearing up to be a record setting year of the number of both commercial and residential development permits applied for.

At Lloydminster City Hall, a lot of work in the past year-and-a-half has gone into developing a positive workplace culture.

“We’ve undertaken a lot of work on cultural transformation and have identified how we move from a permission-based operating culture to a service-based culture,” remarks Mulligan.

“Another important task we have undertaken in the past year is to try and retain within the city the best people we can so that we can deliver the services that will provide our businesses and our taxpayers with the environment they need to be successful. We also have a project called E4 Lloydminster, which has been designed to deliver the comprehensive Municipal Development Plan by the spring of 2012, and will provide us with the vision, parameters, boundaries and direction to meet our goals and establish what our city’s priorities are.”

Mulligan believes that within the next five years Lloydminster will emerge as a “more pronounced service centre” for the region, with stronger strategic partnerships in place with nearby towns and cities.

“We want to be a centre for innovation,” he stresses. “We want to achieve this by engaging the public and we want to demonstrate accountability as expected from the government.”