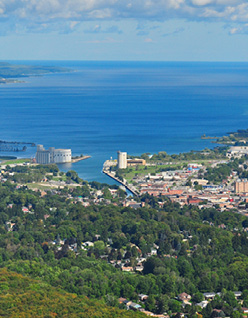 A historic community situated on the port of Georgian Bay, the City of Owen Sound is a vibrant community with a well-diversified economy and an outstanding quality of life.

That was the message from Steve Furness, Manager of Economic Development with the City of Owen Sound, who this month spoke with The Canadian Business Journal.

“If you haven’t been here, you’re missing something,” said Furness, highlighting the frequent perception that Owen Sound is farther north than its reality. “It seems to be that perception that if you’re driving north, we’re farther away, but we’re not that far from the Greater Toronto Area and we’re just two hours from Toronto’s Pearson Airport.”

A wonderful place to live and do business, Owen Sound is a cultural community with a passion for all things life. Natural surroundings like the Niagara Escarpment define Owen Sound. A focus on being the community of choice attracts young families, entrepreneurs, and people of all ages. Owen Sound offers an opportunity that combines work and play.

Recognized as the Cultural Capital of Canada, Owen Sound is home to several of Canada’s greatest museums and historical figures, including the Tom Thomson Art Gallery, namesake of the famous Canadian artist and native of Owen Sound, as well as the Billy Bishop Home and Museum National Historic Site, the heritage home dedicated to the life of Owen Sound native Billy Bishop, a First World War flying ace.

Meanwhile, events like the Salmon Spectacular, Summerfolk, and the Festival of Northern Lights also highlight the local events calendar. The city’s attraction as a tourist hub is illustrated year round, with Ontario tourists flocking to the city, creating an extraordinary tourism sector for the Grey Bruce region.

It’s interesting to note that Owen Sound, a city of about 22,000 residents, did not see the same effects of the recent economic downturn as compared to other small cities in the province. Although a dip in the local manufacturing sector was inevitable, it remains viable and an important part of the economy, while the unemployment rate also remains among the lowest in the province. Dedicated workers enjoy living in Owen Sound and the local labour force is its greatest asset.

Owen Sound has a broad economic base of retail services, manufacturing, tourism, and healthcare –Grey Bruce Health Services is its biggest employer with 1,600 on staff. Transcontinental Printing, operating in Owen Sound for more than 150 years, is also among the city’s largest employers. Coming out of the recession, Owen Sound sees more opportunities within the city, and actively promotes its Georgian College campus that offers skills upgrading through trades courses and apprenticeships. More than 1,000 full-time students are enrolled for the upcoming school year.

“Owen Sound offers all of the advantages as well as the quality of life. It is a community with a lot going on from a social and cultural perspective,” summarized Furness, who attributed the community’s quality of life as a reason for local business success –1,700 businesses serve a regional population of more than 150,000.

Deborah Haswell, Mayor of the City of Owen Sound, added that nearly 20 small businesses have opened their doors in downtown Owen Sound in the past six months. “It’s quite staggering when you consider the size of this community.”

Quality of life has strengthened the community’s ability to foster business success. Mayor Haswell commented, “We’ve been very resilient [to the recession] because of our diverse economic base. We also have a lot of small niche, owner-operator manufacturers that are connected to the community, and I believe this is the future of the manufacturing sector in Owen Sound.”

Owen Sound offers a range of recreational opportunities across the Grey Bruce region, from the nearby ski hills of Blue Mountains, to Bruce Peninsula National Park, to the sand beaches of Lake Huron, to boating and sailing in Georgian Bay. Owen Sound offers four seasons of remarkable recreation.

Owen Sound has a community lifestyle with an urban feel that includes the amenities of a larger centre, while still easily accessible from the Greater Toronto Area and Southwestern Ontario.

The City of Owen Sound has been recognized as a Community in Bloom, a natural selection given its award-winning landscaping and sense of community, particularly in its recently revitalized downtown core. Downtown Owen Sound has set the standard for streetscape, from banners, to benches, to beds of flowers.

As a result, the community has seen greater investment in its downtown and harbour area, including the residential sector.

“It’s exciting because it anchors our downtown in terms of people wanting to be downtown,” Furness said. “Our downtown and harbour front is what Owen Sound was built on. Owen Sound is blessed with three large municipal parks and a lot of green space, beautiful landscapes, and waterfall trails.”

Owen Sound is the place to be for all aspects – from business, to families, to retirees. The city has a diverse economic base and sees several growth opportunities in its future. Owen Sound will continue to build on its assets of quality of life and sense of community, creating the ideal balance for its citizens.