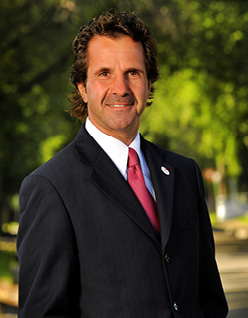 It was the city of Regina’s new Global Transportation Hub (GTH) that started a domino effect which has led one of the most significant municipal overhauls in Canada in over 50 years.

“The Government of Canada is pleased to invest in the Global Transportation Hub to create awareness of the facility and help link Saskatchewan exporters to international markets,” said MP Andrew Scheer on April 5. The new inland port, which involves the building of a new overpass at the intersection of Highway 1 and Lewvan Drive and a connecting road between Highway 1 and Highway 11, is to be set on a 1,600 acre site, and is anticipated to attract up to $300 million in new business to Saskatchewan.

Among the businesses to use to the GTH is logistics giant CP, whose need for a larger, multi-modal transportation hub for its expansive logistics network precipitated its move closer to the new infrastructure. CP’s move had a gravitational pull on one of its largest customers, Loblaws Inc., who in turn moved their facilities close to the GTH, setting up shop with a staggering one-million-square-foot distribution centre nearby.

Suddenly, an unprecedented 33 acres of prime real estate in downtown Regina were available, creating a golden generational opportunity for the city. Located between the vibrant entertainment district of Dewdney Avenue and downtown Regina, the City Council, in partnership with the private sector, neighbourhood groups and residents, is developing a project that will complement and nurture these two neighbourhoods and put the best of Regina on display.

It was quickly decided that the land would be best used to promote sports, arts and culture, which precipitated the vision for a new entertainment complex, one that would replace Mosaic stadium. In turn, the additional 20 acres used for Mosaic stadium also freed up.

On April 19, Mayor Pat Fiacco released a vision for redeveloping the land, which includes transforming the current Mosaic Stadium site into a mixture of housing, commercial and retail opportunities, and development of the CP land to include a new multi-purpose entertainment centre, as well as commercial and retail space.

“This project will be by far the biggest inner-city re-development initiative in Regina’s history,” Mayor Fiacco said. “Turning the vision into reality is complex, but it will pay huge dividends for our entire community.”

“We have never had an opportunity to redevelop 53 acres of land right in the heart of our city. I can tell you the beauty of [the revitalization project] is it is a mix of commercial, residential and entertainment—it really brings everything together.”

Planning and implementing a project of this magnitude is a long and complex process, but the city has developed what has been called an “aggressive timeframe” for its completion. The entertainment centre is a top priority and is being treated as a project within the larger initiative. “Our expectation is that by the summer of 2012 we will have a shovel in the ground and the entertainment facility and commercial development in its vicinity will be completed by late 2015, early 2016,” says Fiacco. “To have the entire 53 acres redeveloped will be a 10 to 15 year plan.” The city’s detailed plan is to be submitted by August 1.

But do not get the wrong idea that this new entertainment facility’s primary function will be to host the Roughriders. While it will be the home venue, unlike Mosaic, it will host a myriad of other events. “They will be using it the least,” says Fiacco. “We are not interested in having a single-use facility. This will be year-round facility and will have every opportunity for diverse use. Amateur sports will take advantage of the building, as will arts and culture events, as well as trade shows that we couldn’t host before. So you can imagine the trade that will come as a result.

“It will bring a whole new cultural component to our community.”

The city’s initial investment will be $500,000 split between the provincial and city budgets, money that Fiacco says will pay dividends quickly. Currently the city is paid $225,000 in annual property tax from CP on the 33 acres of land. The land occupied by Mosaic Stadium is subsidized by about $2 million a year—so the city collects nothing on it. “When [the land] is fully developed, the taxes collected on the 53 acres will be a minimum of $3 million a year,” he says. “The $500,000 investment in the beginning is very minimal for what we are going to get in return.”

On a personal note

“We have an incredible council here,” Fiacco says as he reflects on the impact of this revitalization plan for Regina. “My 10 colleagues and I work as a team. I can tell you when we voted on [the revitalization project] it was a unanimous decision.

“Yes,  the 53 acres is magnificent, but [it is because of the] GTH and our location in the centre of Canada and above Chicago…that we are able to do this,” says Fiacco. “That is a real economic driver for Regina and southern Saskatchewan.

“The revitalization project has allowed us to open these lands and allowed us to take advantage of a much larger opportunity that is going to, one, build density and, two, reduce the footprint of expanding our economy because it is infill; everything is there, such as transportation and utilities.

“I’m thrilled, absolutely thrilled,” Fiacco says. “We are doing it for the future of this community so 30 years from now citizens are going to say we are very fortunate to have a completely developed inner city.”