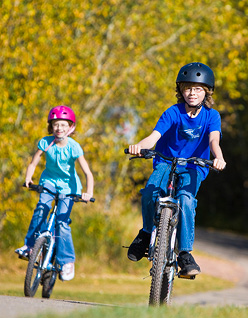 Situated just west of Edmonton, the City of Spruce Grove serves as a growing business hub in the province of Alberta.

Incorporated as a city in 1986, Spruce Grove is home to more than 25,000, and serves as a commercial centre for its tri-municipal area, which also includes the nearby municipalities of Stony Plain and Parkland County. The City of Spruce Grove also represents part of the Edmonton Capital Region, a conglomerate of municipalities surrounding the Alberta capital, akin to Ontario’s Greater Toronto Area.

This year, Spruce Grove celebrates its 25th anniversary as a city, having previously been incorporated as a town in 1971. Today, the City of Spruce Grove is one of the fastest growing communities in Western Canada, represented by its development relative to the size of the community.

The City of Spruce Grove is described as a modern urban centre that holds a strong sense of community.

Stuart Houston, Mayor of the City of Spruce Grove, believes the city is a vibrant community, one that offers housing options for all, excellent schools, culture, sports and recreational choices, and a mix of business, from national retailers to local shops.

“We’re no longer seen as just a player in the region, but rather as a leader in the Alberta capital region,” Houston said.

“It’s not just the location that makes Spruce Grove the Community of Choice. This city boasts a mix of industry, commerce and community that is the envy of other municipalities,” states the City’s website. “Industry has also found a home here, and with a skilled workforce nearby, there’s plenty of room for growth.”

Several expansions are taking place in the City of Spruce Grove, prime among them the Century Crossing development, a $75 million retail development which will host outlets such as Starbucks Coffee, SportChek, Shoppers Drug Mart, Save-on-Foods, Winners, and more. Another project, on the northeast side of the city, is a major $135 million development which will begin this fall. The project will result in a major destination, including a retail and hotel complex. In its construction phase, the project will create more than 2,600 jobs, resulting in more than $114 million in employment income for workers in the City of Spruce Grove.

Accordingly, alongside the growth of its business community, the City of Spruce Grove has seen population increases in recent years as well, with its population growing as much as 6.6 per cent annually.

Reads the City’s website, “When we make the connection between economic, social and environmental elements we create a common vision for moving forward to a future where quality of life is enhanced, the local economy grows and the community thrives. Our world is changing. The ability to achieve environmental, economic, and social sustainability, adapt to changing circumstances, and develop partnerships will be essential to Spruce Grove’s long-term success as a community. When we make decisions based on sustainability everyone benefits.

Appropriately, a recent study ranks the Alberta Capital Region as having the best economic potential in all of North America, while also being among the lowest globally in terms of business costs.

“We’re working to create a sustainable city where families thrive alongside business and industry. It all comes together to make Spruce Grove the Community of Choice.”

Houston summarized, “Spruce Grove has a quality of life, it is great city with parks and trails, very modern infrastructure, 40 kilometres of walking trails, 200 acres of open parks and space, city recreational facilities, and it is a city committed to green spaces.”