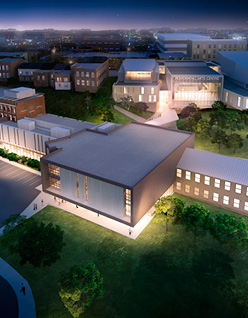 At the municipal level, the City of St. Catharines established a detailed Downtown Creative Cluster Master Plan in 2008 to transform and advance the local surroundings. Based on local investment, only a few short years from today the City of St. Catharines will be home to a revitalized downtown that features a new state-of-the-art performing arts centre, a newly constructed spectator facility/arena, a nearby and modern healthcare complex, and much more.

St. Catharines has implemented attractive business measures that drive investment and job growth within the city. Such investment has combined for a healthy business environment and exceptional quality of life. St. Catharines is building on the idea of public infrastructure that provides a basis for private investment.

Slated for completion in 2014, the Downtown Performing Arts Centre will be a specialized, purpose-built, and professionally managed facility that will present, promote, and develop the arts in Niagara.

The project is being developed in partnership with Brock University, which will move the Marilyn I. Walker School of Fine and Performing Arts, a collocated project valued at $43 million.

This development is key to revitalizing Downtown St. Catharines, the urban growth centre of Niagara, adding an important new cultural attraction to the region, serving artists, students, and arts patrons across the peninsula.

Described as “two projects under one umbrella”, the Performing Arts Centre, although municipally owned, will be a shared facility between the City and Brock University. The City of St. Catharines is responsible for $60 million of its development, covering four venues that will include a 900-seat concert hall, a 300-seat recital hall, a 180-seat film theatre, and a community black box room to be used by cultural groups within St. Catharines and the Niagara Region.

St. Catharines is home to two aging hospitals, which will be replaced in 2013 with the completion of the Niagara Health System’s (NHS) new St. Catharines Site.

Ideally situated to serve St. Catharines as well as the surrounding areas of Thorold and Niagara-on-the-Lake, the hospital will provide a full-range of acute, critical care, surgical, emergency, mental health, and ambulatory services under one roof. The site will also be home to new regional services that have not previously been available locally in Niagara, including comprehensive cancer care at the Walker Family Cancer Centre, cardiac services at the Heart Investigation Unit, and tertiary mental health services.

The two architectural firms worked alongside PCL Constructors Canada as part of the Plenary Health team on the design-build, financing, and maintenance of the new facility. Bill Nankivell, CEO at B+H Architects, told The Canadian Business Journal, “The facility is unique in that it represents all things special about St. Catharines.”

Nankivell described the design process, “There was a lot of thought put into how to best tie in the themes of Niagara, from the striking geographical features like the escarpment to the agricultural history of the area. We tried to use these themes throughout the interior and exterior design, for example using materials with the same texture as limestone, and concrete that looks like old barn board.”

Registered with the Canadian Green Building Council, the new hospital has been designed with a target to meet Leadership in Energy and Environmental Design (LEED) certification, highlighting its sustainability, durability, and energy efficiency.

“This facility brings a new level of service and our intent was to take maximum advantage of the wonderful vistas of St. Catharines, the escarpment, and north to the lake,” Nankivell said.

“As well, we were acutely mindful of the need to have our design contribute to increased energy efficiency in the facility’s daily operations. We decided to make the building relatively compact in order to centralize all the main access points around a large social space, a ‘main street’ of key areas. Creating a walkable hospital reduces travel and time, and ultimately brings people together.”

Nankivell summarized, “We think buildings can be elegant and beautiful, but they can also be very efficient, modern, and functional with great social qualities for people to live and work. We also think this facility will be recognized in terms of its accessibility and accommodation made for people. It’s a barrier-free design taken to a very high level.”

Sue Matthews, Interim President and CEO of the Niagara Health System added, “When the facility opens on March 24, 2013, our city’s new, world class hospital will set the standard for healthcare throughout Ontario and across the country, becoming a coveted place to work and attracting the best and brightest to the Niagara Region, but most importantly, it will serve to enhance the quality of care and service we provide to the people of Niagara.”

On budget and on schedule at over 93 per cent completion, the project provided a significant boost to the local economy, with 85 per cent of the trades being sourced from the local area.

A partnership between McMaster University, Brock University, and the Niagara Health System will see additional research completed in the hospital and adjacent lands.

The City of St. Catharines has taken a proactive role toward local investment opportunities. One example is nGen, the Niagara Interactive Digital Media Generator, developed in partnership with Brock University and Niagara College. St. Catharines is investing in the region’s emerging technology sector and leveraging the success of recent local university and college graduates. These critical partnerships with Brock University and Niagara College represent a link to broader investment.

An incubator for local startup companies, nGen currently provides space for six companies involved in business planning and development, offering state-of-the-art equipment like a motion capture studio, a 3D prototype printer, and a sound booth, resources that are typically unaffordable for new companies.

The nGen model allows for the development and commercialization of onsite research, while continued growth means future economic spinoffs for those companies moving from the incubator and into the St. Catharines community.

David Oakes, Director of Economic Development and Tourism Services with the City of St. Catharines, highlighted the objective of the downtown core revitalization, which began in 2006 with the conversion to two-way traffic for St. Catharines’ main street, an incentive for the Wine Council of Ontario to reroute the Niagara Wine Route through downtown St. Catharines.

Building a foundation from which to grow, fast forward to 2012 and St. Catharines is realizing significant private sector interest in its downtown core, particularly residential investment in the form of mixed-use condominiums. Marco Marino, Economic Development Officer with the City of St. Catharines, added, “We’ve also focused on making St. Catharines a walkable community, and we’re really starting to build on our trail systems and adding bike lanes, we’re pedestrian friendly, and we’re also looking at a public space for the downtown.

The new downtown arena, meanwhile, will begin construction this fall to be ready in 2014. The Ontario Hockey League’s Niagara IceDogs, which came to the Niagara Region in 2007, will relocate from the dated Jack Gatecliff Arena to serve as the anchor tenant of the new state-of-the-art spectator facility. Financed at $50 million, the arena project will include an estimated 5,000 spectator seats, funded with $17 million from the civic project fund, $5 million in fundraising, $1 million from the federal gas tax fund, and the remainder borrowed.

Critical to this downtown revamp is public access and parking. Because of its planning and vision that looks 25 years into the future, the City of St. Catharines secured federal stimulus money as part of its plan financing.

The Niagara Industrial Association (NIA) consists of many advanced manufacturers and local organizations involved in the automotive manufacturing sector as well as several tier-1 industry suppliers.

“We’re now seeing small- to medium-sized manufacturers that are doing well outside the automotive sector leveraging their skills in new industries, especially over the last few years,” Oakes said. “Because a lot of the industrial companies had diversified years ago, they weren’t 100 per cent reliant on the automotive industry, so during the 2008-09 recession

Marino added, “We have a lot of established firms in the manufacturing industry that are also partnering through the NIA on a lot of different projects, whereas they didn’t before, and that is contributing to the growth as well in those sectors.”

The Future of St. Catharines

How will St. Catharines look five years from today? “We’re going to see an entirely different downtown, with major projects built and opened,” Oakes summarized. “We also have a lot of private sector development so you will see condo developments in the downtown and into Port Dalhousie. There will be new public and private infrastructure that currently doesn’t exist.

“We’d also like Brock University and Niagara College to continue a strong relationship with what we’re doing municipally, and that allows us to expand some of our existing services.”

The City of St. Catharines has created a model that attracts tourists, inspires residents, and fosters new business innovation. St. Catharines has focused on investment that replaces dated infrastructure with a systematic approach to building the community and creating a sense of destination for St. Catharines that complements the Niagara Region.