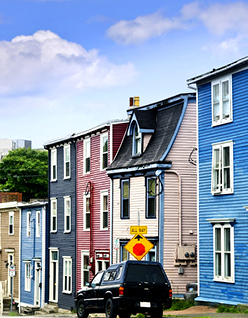 Keeping up with demand

North America’s oldest city is also one of the most picturesque. Situated on the most easterly point of the continent, St. John’s downtown is a patchwork of brightly painted row houses, some of the country’s most beautiful religious architecture and one of the world’s most protected natural harbours; protected by the Narrows, the only entrance to the harbour, at one point 61 metres wide.

The downtown has retained its original layout and heritage established in its mercantile and fishing hey days and has remained mostly unchanged while the pendulum swung in from the 1990s moratorium on the cod fishery, to the oil-producing, have-province of today with a provincial surplus of $1 billion and a municipal budget of $240 million.

The confluence of a number of economic opportunities in the city has created a renewed energy in St. John’s; some are related to oil and gas, some are related to ocean technology through Memorial University and the Marine Institute, tourism and hydro-electricity development through Labrador’s Muskrat Falls.

With business booming, office space in the downtown core is becoming more and more in demand. Because of St. John’s strict heritage laws, development in the downtown core is a rare occurrence, yet a  proposal was made two years ago to construct a new office and parking building in downtown St. John’s, on the west end of Water Street. The location has long been the site of the old Woolworths Building, which has been empty for 30 years and “in need of some tender loving care for some time”, said Deputy Mayor Shannie Duff in 2010.

Developed by East Port Properties, Mayor Dennis O’Keefe can see the construction underway on 351 Water Street (the former Woolworths building) from his office. The $45 million, six-storey, 165,000 square foot office tower above prime retail and commercial space, and a 446-car parkade, including 246 public parking spaces. The first new office building in downtown St. John’s in more than 25 years and the first to be heated and cooled by sea water in the province.

CBJ spoke to O’Keefe about what the development in St. John’s will bring and what it means for the city.

“This building symbolizes the resurgence and the positive nature of the economy here in the city of St. John’s,” says O’Keefe. One of six new properties being developed in the area, including a new 12-story hotel, a 6-storey condominium building, and more offices, “351 Water Street is particularly symbolic I think because it has been such an eyesore over the years,” continues O’Keefe. “Here we have a new building going up in response to and symbolizing the need for parking and class-A office space and accommodation in the city.”

Mayor O’Keefe says most of the offices will be filled by oil and gas professionals and some other professional associations here in the city as well as professional individuals in the ocean technology sector.

351 Water Street, as well as the additional developments, will “revolutionize, re-energize the west end of Water Street and [adjacent] New Gower Street and Duckworth Street,” says O’Keefe. “Then if you go to the east of City Hall, we have the Bell Street development which is a combination of office space, condos and parking facilities.”

These sentiments are echoed by Director of Economic Development, Tourism and Culture, Elizabeth Lawrence. “The development at 351 Water Street is indicative of what is going on in metropolis St. John’s. The confidence in the city is very high. Twice a year we review the GDP of the St. John’s area, and we can look at the GDP including the petroleum industry or excluding it—the latter has shown to be growing even faster, which speaks to the many ancillary activities and economic drivers.”

Some of those are the significant post-secondary education in the city, which boasts the largest university east of Montreal. Another is the industry niche for technology, logistics and research for working in harsh north Atlantic Ocean conditions, which many companies and facilities export from St. John’s. Not to mention growth in employment—most of which is full-time—after a period of record high unemployment.

The city is growing at a rapid pace. “In the St. John’s metro area from 2007 to 2011 we have actually grown by five per cent,” notes Lawrence.

When asked if O’Keefe could have envisioned the Newfoundland and Labrador economy doing such a 180 degree turn in a short period of time, he says, “If anybody had said that to me 20 years ago, I think I would have said no, it’s not possible. And yet it has happened because of diverse economic opportunities.”

O’Keefe also points to a $5 billion comprehensively planned land assembly/development project of Newfoundland and Labrador Housing Corporation located in the western section of the City of St. John’s called Southlands. The project is backed by former Premier Danny Williams, and would be potentially one of the largest in the history of the city, the launch of which could be a few months away.

“Southlands speaks to the confidence we have in the belief that, economically speaking, we are forging ahead and we will continue to forge ahead long-term because this development is a 15 to 20 year development.”

Keeping the spirit of downtown

Despite this facelift the downtown is getting, Mayor O’Keefe, council and the residents of St. John’s are dedicated to maintain the heritage and beauty of the downtown area. “The downtown and harbour front is the heart and soul of the city,” says O’Keefe. “The challenge for the city is to promote and realize economic development and at the same time do so respecting and encouraging our history and culture and heritage.  What we have to do is blend both and so we have a city plan which addresses that.”