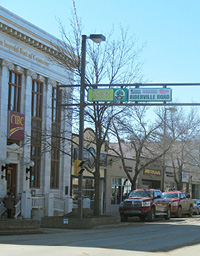 The City of Weyburn, home to “the Greatest Canadian” Tommy Douglas, is a medium-sized Saskatchewan community about an hour’s drive outside of Regina. Originally settled as an important railway community, Weyburn is now at the heart of the Saskatchewan bakken oil play, and is attracting not only attention, but businesses and new residents for its small community feel and big city opportunities.

A strong agricultural economy has been the staple of the city for years; high grain and commodities prices have boosted the city of Weyburn into a new gear, driving wealth and jobs in the community. But this seems to be a tipping point, to borrow a phrase, for Weyburn, where manufacturing and, significantly, the bakken oil field, are awakening new potential in the city.

“All the stars have aligned for Weyburn,” nods Mayor Debra Button, a lifelong resident and former city council member. “Things are all starting to really flourish.”

Button says that throughout the economic crisis, there was always a different feel in Weyburn specifically and Saskatchewan in general. Certainly the province came out of that time relatively unscathed. Manufacturing picked up, with Stewart Steel Inc. manufacturing products for all parts of Canada, the U.S. and Europe from Weyburn, for instance. “There was a hum that things were going to turn around and things started to,” she says. “There is a new Saskatchewan outlook and people, it’s nothing that I can tell you exactly, but it’s different, and people in Saskatchewan and Weyburn are walking tall and talking proud.”

Besides being the largest inland grain gathering point, increased oil activity translates to more economic activity in the community. Once touted as the gateway to the bakken, new seismic information places the bakken farther west, placing Weyburn in the centre of the oil-rich play. “Weyburn is in the heart of [the bakken]. No longer the gateway, we are in the heart of it.”

The downtown commercial area is booming, and land developers are struggling to stay ahead of demand for new housing. 200 new lots were built last year and another 75 are slated to be developed in 2011. “We are just having such prosperity and growth that we are trying to stay ahead of the new market development,” says Button. “In 12 to 18 months those will be filled, doing land work to open up more, staying ahead, and also have a housing advisory to council and working on other forms, be it affordable rental, home ownership, taking just one part of our market.”

“The City of Weyburn’s mission is to provide leadership for the creation of a common vision and goals for planned economic growth, efficient use of resources, and a high quality of life in the Weyburn community.”

“As mayor I am moving forward and being progressive,” says Button. Not every company fits the mould, but city council has to be very flexible with companies to meet the needs so that they are welcomed and have opportunity in the city and for the city. “Our business community is very much in touch and working toward the same goal. Administration and city council are working to bring in business, our office and the Chamber of Commerce are a joint planned effort and seeing the benefits of that on a daily basis.”

Button was happy to tell Weyburn residents that there would be no municipal tax increase this year. “This was a very well planned and well thought out move,” she says. “Council made sure we were in a safe financial environment. I’ve been on council and mayor for five years, and we’d never been able to do that before. Obviously a lot of great things happened for us to be able to do that.”

For those who have never been, the doors are open at Weyburn and the invitation to come and visit it officially declared. “You need to see it and feel it. So many developers have come in and said there is a good feel and have chosen Weyburn because they know they will be able to get people to move to work for them in a city like this,” says Button. “The heart remains its people and they are good people and I am proud of that.”