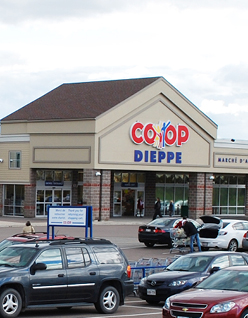 Co-Op Atlantic celebrates the Year of the Co-Op

Headquartered in Moncton, N.B., Co-op Atlantic is owned by more than 100 co-operatively-owned member businesses across Atlantic Canada and the Magdalen Islands whose work includes food, agriculture, energy, and social housing and real estate services. Co-op Atlantic’s amalgamation and buying power makes it a vital contributor to the health and stability of Atlantic Canadian families that are members.

Upon designating this year the International Year of Co-operatives, UN Secretary General Ban Ki-moon stated, “Co-operatives are a reminder to the international community that it is possible to pursue both economic viability and social responsibility.”

Co-op Atlantic epitomizes the good a co-op can achieve in both these realms. Consolidated sales exceeded $560 million in the last fiscal year. The co-operative network’s combined sales exceed $2 billion, and it employs more than 5,000 people. Not only does it represent over 3.4 per cent of employment in New Brunswick alone, it generates income and sales taxes in excess of $117.4 million. Recent Canadian studies have shown that co-operatives have a 50 per cent higher survival rate than shareholder operations, owing to the deep-rooted presence co-ops have in their communities.

On a local scale, Co-op Atlantic makes giving back to its community an on-going priority. Recently, for example, it raised $32,500 for the IWK Children’s Hospital in Halifax, $47, 599 for the United Way of Greater Moncton and Southeastern New Brunswick, marking their 25th year of contribution to both of these organizations. When Hurricane Igor smashed through Newfoundland last September, many small villages were cut off. Kevin Jacobs, general manager of Newfoundland’s Clarenville Area Co-op, jumped in to help, organizing boats to deliver food to these communities.

“One example of success, and we have numbers of them each year, is the national award given by Canadian Grocer and Chatelaine magazines in recognition of local grocers for their impact on their communities,” says Paul-Émile Légère, CEO of Co-op Atlantic. “This year one of the winners was La Coopérative Régionale de la Baie, Tracadie-Sheila, N.B, one of our Co-op stores in the Acadian region of New Brunswick that has, over the last 10 years, raised over $1.5 million to support the local hospital.”

Through its affiliation to national and international industry organizations, Co-op Atlantic also contributes to the progress of the wholesale and retail food and the agricultural sectors. The co-operative plays a leading role in United Grocers International, which unites 10 regional or national grocery chains in Canada alone, and is also a member of Co-operative Research Farms, an international research consortium with members in seven countries.

“We are able to take the purchasing power of our various communities and put them together into a second-tier co-op and we are able to parlay that into other partnerships we have, for example, buying groups, partnerships with other national and international co-ops,” says Légère.

Co-op Atlantic in the community

Co-ops have historically displayed a strong attachment to their communities, for the simple reason that their founders and members grow roots there, and their co-op becomes an instrument for social and economic development, says Roméo Cormier, Manager of Public Affairs. ‘’For many people, co-ops and community are synonymous. Because the owners are local residents, they‘re always keen to support local projects and causes. In our experience, no other business, in any community, gives back as much as a co-op.”

According to Vice-President of Corporate Communications and Corporate Secretary, Léo LeBlanc, Co-op Atlantic’s main competitive advantage is its ownership base and its unique relationship with its customers. The fact that the company is a co-operative wholesaler means that its customers are, in fact, its owners.

“When you ask who owns Co-op Atlantic, the answer is not that it’s a wealthy family, or an out-of-province corporation with thousands of unknown shareholders. Co-op Atlantic is owned by more than 200,000 families who, through their ownership of their local co-operative, are also owners of Co-op Atlantic.

“At the local level, the Co-op stores are owned by the same people who shop there,” says LeBlanc. Members are legal owners of their co-op, and at the end of the fiscal year, a part the co-op’s financial surplus is returned to the member/owners in the form of patronage rebates. That feature alone makes co-operatives unique: profits going back to those who generated the economic activity.”

In the same way that local co-ops provide feedback to its wholesale supplier, the local residents who own the co-op in their community offer feedback and make requests for products and services that they would like to receive. That’s one way co-ops apply democracy to business decisions. Another is the governance model that co-ops apply. They are all governed by an elected board of directors from their local communities, both at the local level, and at the wholesale level, at Co-op Atlantic.

In agriculture, one of Co-op Atlantic’s key contribution stems from its unique relationship with the farming community in the region. Co-op Farm Stores, together with Co-op Atlantic’s Agriculture Division, continue to be regarded as the leading choice for developing, supplying and consulting on the inputs, techniques and approaches that allow producers to maximize their profitability.

Although the regional agricultural landscape is shifting and adjusting to global trends, the co-operative agriculture business continues to grow, particularly with farmers who realize that the co-operative approach to animal nutrition, customer feed formulations, and the support of Co-op crop and farm supply specialists enhance their opportunities to increase yields and profitability for their farms.

Co-op Atlantic is developing a unique, triple bottom-line scorecard that allows co-operatives to assess their yearly performance, not only at the financial level, but also at the environmental and community engagement levels. This scorecard has attracted the interest of university researchers from Mount Saint Vincent University, in Halifax, and the Université de Moncton, which is currently testing and refining the tool.

“Our state-of-the-art alternative energy store is another exciting project that our co-operative system has taken on. Our new Co-op Energy stores now offer new, alternative energy systems for the home and small business. These systems include wind turbines, heat pumps, solar energy panels, geothermal systems and the most efficient oil furnaces on the market.”

Co-op Atlantic has adopted continuous improvement practices, where every process, from the handling of goods to the use of paper, is evaluated with the goal of accomplishing more with less energy and input.

2012 will see the fruits of planning, with continued membership growth. Co-op Atlantic will also be serving more independently-owned stores in the Atlantic Provinces. In other areas of development, the organization will continue to work with its provincial co-op councils to support co-operative initiatives in the region.

“One key element at the heart of any growth strategy, certainly in our co-operative system, is that we can’t grow faster than the needs of our members,” says LeBlanc. “The members will provide direction to the organization. We need to work with co-op leaders in the community to develop a clear vision of the future where the provision of goods and services is tailored to the changing needs of that community, and takes into account factors like changing demographics, the reduction government services and the need to keep youth in the community. Right now, the co-operative model is proving to be the best home-made solution to those needs.”

“The challenge,” concludes Légère, “is to have a strong financial position that will allow us to invest in the future. Our owners will decide what direction we will take. We will continue our dialogue, at our zone conferences, at our AGMs, and our retail consultation meetings to fully understand their needs. Finally, our role in management is to deliver bottom line results that will create the capacity to invest capital in opportunities as they arise.”