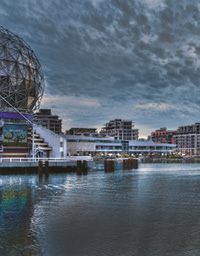 “It’s a combination of feeling good about the projects, living in a workplace consistent with the projects we design and offering opportunities for people to make a difference at every level.”

Mark Blamey, CEO of Cobalt Engineering, has a clear vision for his company which has led the Vancouver-based engineering firm to design some of the country’s most pioneering projects in the field of environmentalism and sustainability.

The integrated mechanical and electrical engineering design firm uses its expertise to push the boundaries in sustainable design and energy efficiency. Unrestricted to a particular sector, the firm’s mechanical, electrical, sustainable design, refrigeration and LEED consulting work can be found in healthcare, education, retail, civic and mixed used developments across the country and around the world.

“Although we only design a small fraction of the projects out there, we have a high proportion of award-winning buildings that have become well known,” says Blamey. In 2009, Cobalt designed the first LEED platinum CS Office building in Burnaby, British Columbia. Cobalt was also integral in turning the Vancouver Aquarium into the first LEED Gold aquarium in the world, as well as the development of Millennium Water, home of the 2010 Vancouver Olympic Athletes’ Village and winner of the 2010 Globe Award for Excellence in Urban Sustainability. The company’s resume boasts too many awards and firsts to list here, but suffice to say Cobalt is leaders in bringing new ideas and technology to the mainstream.

“It takes boldness to pioneer new systems,” says Blamey, “and a passion for the projects and a willingness to try new things.” Named one of Canada’s best workplaces, the Cobalt penchant for outside-the-box thinking is manifest in the creation of its workspace, which was developed to have all the staff on a single floor and in sight of one another. The idea, says Blamey, is to take advantage of chance encounters. The workspace also has working technologies so that clients can see working capillary mats in action, for instance. “We want to make it easier for our staff to get the information they need by having everyone in close proximity, and we have seen gains in efficiency from the layout.”

As innovative as the workspace is, Cobalt’s success lies in its projects. By maintaining close relationships with clients and amassing repeat business, Cobalt has been invited to do projects as far from home as the Philippines and the UAE. The company provided the sustainable master planning consultations for the Al Ain Wildlife Park and resort, an 893-hectar mixed-use area in Abu Dhabi. Cobalt contributed to making the resort a self-sufficient and integrated system with onsite waste water reuse, gasification of waste for energy efficiency and the use of solar power for the generation of power and desalinated water, placing the resort on the path toward being a global model for ecological sustainability and conservation.

“If there is a change in direction for us, it’s to be more of a sniper in that we have been good at latching on to opportunities as they come. Our business is now based on repeat business and getting to know fewer clients very well and serving them over time. So our service continues to evolve to serve them better.”
On a larger scale, Cobalt took part in a 3 million square foot mall expansion in Manila, Philippines at the request of the developer who wanted the mall to be “a shining example of sustainable design in the Pacific Rim” by implementing green design elements including air quality, water, resources and energy. Cobalt’s master planning ultimately surpassed these goals based on the original concept design.

Closer to home, Canada’s largest aquarium attracts hundreds of thousands of visitors a year. The Vancouver Aquarium is dedicated to the conservation of aquatic life and has housed researchers since the 1950s. Cobalt’s own dedication to achieving what was once thought impossible made it the best allies for the aquarium’s Marilyn Blusson Learning Centre. At just over 4,000 square metres, the centre is “a high performance building that has achieved outstanding environmental goals.” Cobalt’s innovative engineering has reduced energy costs by 38 per cent by replacing traditional mechanical refrigeration with titanium heat-exchangers which use incoming sea water to cool the building.

“We hope people replicate what we have done so that the overall impact is greater,” says Blamey.

One particular project that was able to reach many nations was Millennium Water, known colloquially as the Olympic Village. “This was an incredibly challenging project,” says Blamey. The scale of the project was massive, spanning eight city blocks and comprised of over 1,000 residential units including 252 units of affordable housing, 110 units of rental housing and 60,000 square feet of retail space.

“Cobalt was responsible for providing numerous services for the project including mechanical, sustainable master planning, facade design for all of the buildings and building energy modelling services, as well as LEED project management services for related mechanical credits,” says the company.

“What I’m proudest of is that when 7,000 people moved in at once, everything worked,” says Blamey. “Eight city blocks of buildings and the biggest complaint was about thermostat settings (a personal preference).”

As Cobalt has become further ingrained into the future of sustainability in Canada, it has come into its own. “Keeping track and keeping ahead of new technology is what gives us an edge,” says Blamey.

When asked, Blamey will tell you that at the heart of Cobalt’s success both nationally and internationally, is the passion of the people working there and the desire to have a positive impact through sustainable design. This is a company where pride and ingenuity don’t bend to the status quo. “We believe [we are] working for a company that is making a difference and making something tangible. When we start, all we have is ideas and by the time we are done we have a building that you can touch and feel and see.”