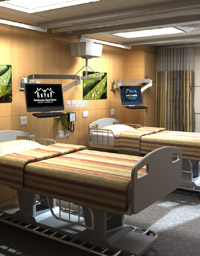 There are around 73,000 residents in Colchester and the municipality of East Hants, Nova Scotia. The Colchester East Hants Health Authority, formed by the Nova Scotia Department of Health back in January 2001, provides a range of healthcare services for every one of those people. Its latest project, the $180-million Regional Hospital Replacement facility, shows just how monumental and vital a task meeting the population’s needs is.

In a nutshell, the health authority plans to build a facility with the space, existing and new programs and all-round capability to exceed the region’s healthcare requirements today and best-prepare for whatever they might be tomorrow. This is likely the largest construction project the area has ever seen and has been ongoing since 2001/2002, planned to open in 2012. CBJ caught up with Colin Stevenson, VP operations, at Colchester East Hants Health Authority, to hear about what is in store for the residents of Colchester and East Hants.

According to Stevenson, when the project began some eight to nine years ago it was a case of the district health authority looking at what its catchment population was, where change and demographics were heading, what types of services people were currently accessing and what it should expect to have to deliver to its people in the future.

“We encompassed that into what we call our development strategy, so we started with a district role document,” he says, explaining that this is “the description of us as an organisation, the role in our catchment, where we saw the change in demographics and service models and what type of services we would need to provide in order to meet what the needs and expectation of our catchment area would be.”

In doing this, Stevenson says that the authority was presented with a space requirement. The program services and plans for delivery were in place, and the next step was looking at where and how they might be brought to life, including the existing hospital.

“That took us to identifying that we needed to make a couple of changes to our existing buildings and look at targeting some services in new areas,” Stevenson explains. “We realised that we didn’t have the space in our existing building in order to provide the services, and we were close to occupying all of the land that we had available to us.”

The choice was renovation or new build. Some of the existing hospital is as much as 80 years old which presents particular renovation difficulties, and after extensive research into what the long-term gains associated with each of those approaches would be, the authority made its proposal to the Department of Health and subsequently received support to go ahead with the new building.

Retaining and adding to services

The plan, in brief, is to take the hospital’s existing services and facilities and replace them, but Stevenson highlights that this also involves spotting “an opportunity to make changes where they’re actually needed.”

“The building is going to be about 30 per cent larger than our existing hospital. We currently have 124 in-patient beds and we will continue to have [that] we’re just changing the allocation of some of the beds based on different programmes,” he says, explaining that core services such as medical, mental health, intensive care and maternal child programmes will continue.

“Some of the things that we’re changing are that over the past two years we’ve started to introduce a urology programme which is a specialty program for our district and two neighbouring districts,” Stevenson says. “We will have that specialty service offered more from a regional perspective.”

The authority will also allocate beds to a palliative or ‘end of life care’ programme, building on the existing one which is interspersed with the medical program, and an intermediate care unit for patients who do not require admittance to an ICU or are leaving ICU to move on to lower care prior to general medicine, or being discharged to home.

Other areas such as medical day, dialysis and oncology have presented other opportunities for growth and with more space, these opportunities may be pursued too. On another altogether more logistical note, construction of a helipad to allow quick access from the hospital’s emergency department into a tertiary centre in Halifax is also planned.

When it comes to putting all of these meticulous plans into practise, Stevenson says that the actual physical move is relatively quick and simple and an organisation which specialises in doing exactly this has been contracted in to make it happen.

“The patient move takes about a day and the actual move of all programs and services will stretch over a couple of weeks,” he explains. “The actual transition to working in that new facility takes a lot longer. We’ve started planning for that process now; we see it as about a two year process in getting ourselves ready for that.”

The authority has a steering committee and transition team in place and currently all of its programs and services are completing an initial transition plan in order to identify the major process changes, which should be complete within the coming month.

“It’s not just moving into a new space for some of these programmes, it’s thinking about a different way to deliver their services and how they provide support to other services,” Stevenson stresses. “Not just the change in space, the change in where they’re located, relationships between programs, how we can improve the flow and experience for a patient, the equipment that they’re going to have, the types of training and orientation we’ll have to do to the building.”

All of these considerations are on the agenda today and the authority is working to introduce as many of these as possible prior to the big move so that it is easier on the organisation, staff, volunteers and patients when the time comes. It looks like preparation and working for tomorrow, today, is the key to orchestrating this large project.

Ever looking to the future requirements of its population, the built-in space growth opportunity offered by the new hospital and the use of this really comes down to how the population and need for service changes.

“We’re trying to keep space as flexible as we can so that we can adjust. There are a couple of areas in the building where if we grow and maximise the space that’s already built we can grow on top or outside of the building,” Stevenson says.

“For us, the real immediate goal is to try and make sure that we’re maximising the services that we’ll have available, trying to provide the right atmosphere and environment for patients and trying to get the services up to full utilisation.”

The project is also on track be the first LEED-certified [Leadership in Energy and Environmental Design] hospital in Nova Scotia and Stevenson says that a continual goal to have “a sustainable building that’s going to stand the test of time and also reduce its impact on our environment.”

“For us, it’s trying to continue to promote that, making sure that’s what we do within the organisation—not just from how it was built and the energy management systems that may be built in—but also how we operate in the building,” he explains.

It seems that the only aspect left for debate is naming this impressive project, and following 50 suggestions offered by members of the public in April, a shortlist of four suggestions has just been made available for all of us to vote on now.

“The public can either go on through internet, phone-in or fill out a paper ballot to cast their vote,” Stevenson says. “That process is going to close in July, and then we should be able to announce the name of our new healthcare facility.”

Public involvement is another cornerstone of this build, as Stevenson says that future promotion of the hospital will account for the will of many to work in such a facility, the offering it makes the population and those it attracts to the area in both business and family living. The Colchester and East Hants Health Authority is in the process of building an extremely important place, packed with services and care, built to supersede service today and meet tomorrow’s demands alike. It’s certainly a big job, and this is exactly the team to make it happen.