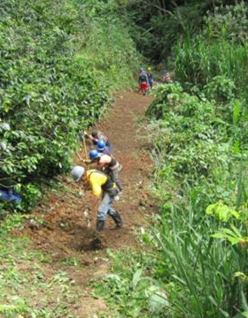 Late last year, Colombia Crest got a big vote of confidence when Toronto-based Iamgold picked up a 14 per cent stake in the explorer for C$3.42 million. This was before drilling on two priority porphyry gold zones, Arabia 1 and 2, began.

Hans Rasmussen, president, chief executive and director of the Vancouver-based explorer has seen 3 to 10+ million ounce discoveries before and believes that results so far are pointing in the right direction.

“In an area like we have identified in Arabia, we have gold in two areas that have the potential for hosting a large ore deposit under both…there could still be multiple areas that just don’t quite come to the surface, and this is typical of general porphyry style systems, so geophysics is the next step…[to identify] drill targets in the future,” he says.

The company has optioned the 340km2 Fredonia and Venecia gold properties, located in Antioquia province close to Medellin and positioned within one of the most prospective and productive gold belts of Colombia – the Middle Cauca belt. This area has more than 500 years of gold mining history and a number of significant discoveries of more than 10 million ounces in the past 10 years.

Colombia Crest is joint-ventured with two different groups; Grupo de Bullet, a private company in Colombia since the mid-1980s with the second largest title holding in the country; and Colombia Mines, a partner that owns the Venecia property.

“Our information indicates that we have at least two gold-rich porphyry systems…only the drill holes will tell us which ones are economic, so if somebody is watching our news as we announce drill results over the coming months, an intersection of one gram per tonne is kind of an economic tipping point,” says Rasmussen.

Some 47 million ounces (Moz) have been discovered in Colombia in the last 10 years by the majors and Rasmussen believes that figure will tally up rapidly as the country attracts more exploration.

The company has enough of a financial cushion to drill for the rest of the year and has no plans to raise money until the results are in, but once they are the company may look to boost its financial position in order to mobilise multiple drill rigs and get to a resource calculation.

Now that drilling at Arabia has started, the company is facing a backlog and Rasmussen has brought in experts who can evaluate regional targets and identify another acquisition that is drill ready by the end of the year. Multiple prongs moving forward make for a healthy status during the exploration phase, he notes.

“The target in negotiation and the eventual deal could take longer but we are looking at somewhere in the fourth quarter to be able to drill something on a new project. We are looking at almost 17 new targets in the area around our projects within a 200km area and any one of those could prove promising based on the data. We have handpicked three that we really liked but once in the field, things can change,” he says.

Rasmussen was recruited in 2007 to head up Colombia Crest because of his technical expertise and experience in South America. Since starting, he has restructured the management team and the board has been revamped with new faces. He also focused efforts on Colombia.

“As a geologist and having worked in Argentina, Bolivia and Chile, I knew that these rich gold belts come into Colombia and it has always been a huge gold producer in South America, but it was just never safe to go to the field. In 2002, the Uribe administration was focused on making the country safer in the main corridors and that is what has enabled a lot of exploration companies to come in and do work in the field. That was the big turning point for Colombia,” says Rasmussen.

At the same time, Colombia Crest’s legacy San Simon project, located in Bolivia, has been put on the back burner and is for sale. Though it has a small gold resource, there are just no markets for work in Bolivia, Rasmussen says. President Evo Morales is perceived to have nationalisation leanings and raising venture capital is impossible.

“It is a good project, it has gold potential but it has become an orphan. We are looking to vend that out to our subsidiary in Bolivia and hopefully retain either a percentage ownership of the buyer or a royalty and/or cash payments,” he says.

Just as Bolivia is perceived as too much political risk by markets, Colombia is considered open for business. Across several sectors and industries, investment is coming in with varying rules on foreign ownership.

Rasmussen explains that Colombia Crest can earn up to 75 per cent of the mineral title and though the surface ownership is separate, mining companies can buy it.

“Foreign ownership of mineral rights is a clearly defined deal… Colombia has rule of law so what is stated in the Constitution is recognised…the issue in Colombia has always been security in the field,” he said.

However, the right approach to acquire a social licence for operations is essential, not just in Colombia but also in the capital of Antioquia province where the gold prospects are near, Medellin.

“In my 12 years of experience with Rio Tinto, I can tell you, if you don’t have communities on your side you will not get a project off the ground so in the earliest stages you start talking to communities,” he says, adding that Iamgold insisted on being part of the relations programme when it bought a stake.

So far, the company has made presentations to local communities including the towns of Venecia and Arabia, explaining what exploration means and how it differs from mining. Where it can, the company employs people from the local community for jobs such as i building pads for drill holes. As the projects progress, so too will the investment in local communities, says Rasmussen.

At the moment, the company is focused on growing and structuring management accordingly while preparing for the impending drilling programme, which includes expertise on the ground in Medellin as well as a separate team focused on new acquisitions.

“The bottom line for an investor or anybody looking at our company is that we are a grass roots exploration story in Colombia. We have come from no prior work at all to drill stage in one year. Unlike our neighbours, there were no prior mine workings or prior miners on the property. What we are drilling right now is done by pure exploration technologies and experience, so what comes out of this could be a truly grass roots success,” he says.