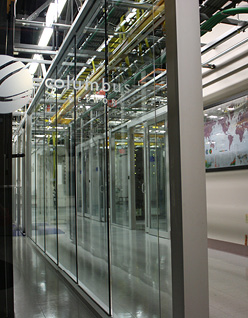 What started out as an ambitious idea of a group of industrious and resourceful Atlantic Canadian entrepreneurs has transformed telecommunications in the Caribbean and the Americas.

Columbus Communications is the brainchild of a group of Atlantic Canadian entrepreneurs whose expertise and experience in the Canadian telecommunications industry led them to the creation of the diversified telecommunications company providing cable television services, high speed Internet access, digital telephone (retail), as well as capacity & IP services, corporate data solutions and data center hosting (wholesale) in 23 countries in the greater Caribbean, Andean and Central American region.

The company’s relatively quick rise (it commenced operations in 2005) has transformed the communications industries in the countries in which it operates from outdated, under-capitalized and often state-run legacy networks to fibre-rich broadband networks that rival those managed by the highest quality service providers in the world.

The story of Columbus Communications is a fascinating journey from an initial interest in marrying together the team’s expertise in operating in the Canadian telecommunications market with international underserved markets, to ultimately creating an entirely new and advance fibre optic cable system throughout their operating region.

In the early 2000s, Columbus Communications’ founder and CEO, Brendan Paddick, and President and COO, John Reid, were running St. John’s, N.L.-based and publically traded cable company Persona Communications. At the time, Persona was serving 250,000 customers spread out amongst 1,200 rural communities across seven Canadian provinces. But the telecommunications world was changing, and an impending consolidation amongst the larger network providers and new disruptive technologies threatened the company’s long-term future.

“At the time, being spread over rural Canada was “a competitive disadvantage,”” says Paddick. “We saw direct-to-home satellite service on the horizon, and knew it wasn’t a matter of if, but when, the larger telecommunications companies like Bell (ExpressVu) and Shaw (Shaw Direct) were going to get the technology and the service delivery right, and this was a serious threat to our long-term growth.”

Anticipating the need for a strategic redirection, the team turned their sites to other markets where it could replicate what it did best — purchasing technically inferior assets with less than adequate historical investment and transforming them into highly competitive broadband networks in high potential growth markets.

The search quickly honed in on the Caribbean market. It was a perfect fit for the team whose experience in rural communities enabled them to see beyond the challenges of serving a region comprised of hundreds of individual islands.

“In 2002, we estimated the Caribbean region was 20 years behind in telecommunication technology,” says Paddick. “The question of the day was if we built a superior network using today’s best technologies, offered quality product at a reasonable price, would consumers act any differently than in other markets in the developed world? We thought, ‘No’. And would people want to watch crystal clear digital video signals, talk on clear and affordable phone lines, and click on high-speed Internet service? We figured the answer was ‘Yes’.”

The more doors Columbus Communications knocked on throughout the region, the more they got the same response. The overarching commonality in these markets was under development in terms of network infrastructure, high prices and a lack of ongoing capital investment. Many of the region’s countries had long standing monopoly telecom operators that were not investing the adequate capital into their networks while at the same time overcharging for less than satisfactory service.

Negotiations to lease bandwidth with the incumbent phone company in the Bahamas revealed that it would be more economical for Columbus Communications to build its own subsea fibre network than to purchase the required capacity to get its service off the ground. “The prices we were being quoted were so staggering that we would tongue-in-cheek quip that we should simply build our own systems. And ultimately that’s what we did.

“Fast forward to 2004 and we have been granted a license by the regulatory authorities in Jamaica to build a subsea fibre out of the country to connect it to the outside world, which for all intents and purposes is Florida’s terrestrial onramp to the Internet. Unable to strike an accord with the Bahamas regulator to land the fibre in the Bahamas to connect to our existing network, we went to the owners of a network that was circumventing the region and sought to purchase bandwidth from the Dominican Republic to Florida. Again, in this instance the price was so staggering that we joked that it was more attractive for us to simply buy the company, which we did and that transaction ultimately catapulted Columbus to the position of the region’s biggest player in the wholesale capacity arena.”

Like dominos, Columbus Communications ended up negotiating with incumbent providers to purchase capacity only to conclude that building its own new network would be more cost effective and would provide better service for its customers. And now, six years later, those previous competitors not only are still competitors but also are now amongst Columbus Communications’ largest customers.

Now consider the current state of telecom in those same regions today and it is clear those 20 years of technology gaps are now measured in a matter of weeks. Columbus Communications is now serving 450,000 retail customers, several thousand corporate customers and over 100 international telecom carrier customers. Since 2005, Columbus Communications has invested over US$1.3 billion in subsea fibre networks, terrestrial fibre backhaul routes, fibre-deep last mile networks, data centers, network operation centers, cable stations and network monitoring facilities. In total, over 18,000 kilometers of subsea cable and 21,000 kilometres of terrestrial network has been deployed throughout the Caribbean and the Americas, and through its retail subsidiary Flow, Columbus has propelled the telecommunications industry forward.

“The moral of the story is going forward we will never motivate a customer to become a competitor. That is the lesson that propelled us into this business in the first place,” says Paddick. “Had a handful of monopolistic incumbents simply provided us with reasonably priced access to the Internet backbone, we would never have purchased or built our own system.”

Transitioning into these international markets proved to be anything but a smooth process. “Although many of the regulatory regimes were promoting open markets, level playing fields and transparency, they had a long way to go,” adds Reid. “In entering this region, we had to be very comfortable and careful in selecting markets where we could invest and be confident that the risk of our investment being expropriated or nationalized was minimal. Once we had that comfort level, we conducted a market by market analysis as to where we perceived an opportunity to disrupt a market that was characterized by underdeveloped telecom assets.”

Ultimately, the company not only invested heavily in constructing a retail last mile network but also spent significant resources through both acquisitions and capital expenditures in building, by any measure, the region’s most expansive subsea fibre network, currently connecting 23 countries in the region. This network effectively enables Columbus Communications, in many cases, to also act as the backbone in markets where it is the leading triple play provider.

This endeavour, of course, required funding, with Columbus Capital climbing the archetypal fundraising ladder one rung at a time. In the beginning, the three initial shareholders (John Risley and Michael Lee-Chin, along with Paddick) sunk in $200 million in equity before raising a dime of debt. As Paddick puts it, “In the early days there were a lot of gut checks and cheques cut,” he jokes, “As you can imagine, the capital markets had some heart burn when I would tell them that there were currently 52 cable TV operators in Jamaica and we would like to be No. 53.”

From there, Columbus Communications leaned on relationships with Canadian banks that had a strong presence in the region, with loans from the Bank of Nova Scotia, Royal Bank of Canada, EDC and CIBC’s First Caribbean Bank. From there, “the numbers started speaking for themselves,” with Columbus Communications transforming into a viable and attractive investment opportunity for any investor.

“We had traditional bank debt, project financing, bridge loans, mezzanine debt, convertible preferred shares, holdco notes, vendor financing. You name it, we issued it,” says Paddick. In 2009 and 2010, Columbus Communications tapped the public bond markets, issuing $650 million of senior secured bonds, which was at the time, and still is today, the largest inaugural bond offering in the region. “That was a true statement that not only had Columbus come of age but the infrastructure play in the region had come of age.

“Not only was our bond offering heavily oversubscribed, but it attracted the ‘who’s who’ of the bond investor community, including Pimco, our largest holder and the world’s largest bond holder,” says Paddick. “We grew this company initially by aggressively securing all forms of growth capital, often holding our noses at the smell of the terms, to eventually accessing the public markets, thereby cleansing the balance sheet and normalizing our capital structure.”

Reid believes the company has seen great success by sticking to entrepreneurial principles that apply across all national boundaries. “That includes hiring great people, continuously investing in your HR capital, building a superior network, treating your customers like you really want them to stay, ensuring that you are a part of the community, and being a good corporate citizen. Those basic rules don’t change from country to country. As Paddick likes to put it, Columbus is not a telecommunications company serving people. Columbus is a people company serving telecommunications.”

The priority is to “build it once, build it right,” says Reid. “We build networks with the future in mind. It’s a long-term investment mentality.”

As such, the Columbus Communications team doesn’t believe in fly-in management teams, rather, the team members have to be deeply rooted as part of the community (for example, Reid and his family lived in Trinidad for over five years and Paddick and family have lived in the Bahamas for a dozen years). This awareness of transforming countries and leaving a legacy is intrinsic to the Columbus Communications philosophy, which aims to always leave a country better than before the company was there.

When asked about his thoughts on the past and on Columbus Communications’ plans for the future, Paddick says, “On the past, it is pretty simple, we never set out to be cool, we set out to be relevant, and that has guided our success to date. On the future, hardly a day goes by that I don’t get asked who is going to win the broadband war; DSL, cable modems, Wimax, 3G, 4G, LTE or some other technology that we have yet to hear about. My answer is always the same it is not our job to identify the next killer app or consumer device, nor should we seek to dictate how our consumers access their entertainment or information, our job is distilled distinctly in Columbus Communications’ mission statement: Don’t predict the future, enable it.”