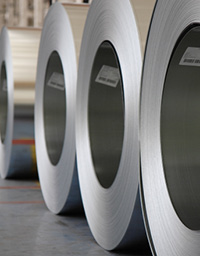 Proud to be Canadian

Commercial Roll is involved in the industry as a metal fabricating business, with specifically custom roll forming as its core business. The primary benefits of such an operation, of course, are its manufacturability, as well as its economical advantage. A number of factors need to be considered for both, including dimensions, geometry, materials and costs, tolerances, volume, engineering, and more.

The process sees metal in sheet, strip or coil formed fed between successive pairs of rolls that progressively bend and form the material until the desired shape and cross section is obtained, according to the company website. This roll forming process strengthens these lightweight materials, composites, and specialized alloys, an example of only a few of the materials it processes.

Commercial Roll began in 1971 and has emerged as a leading supplier of roll form products across North America. This month, The Canadian Business Journal spoke with Kevin Schabel, General Manager of Commercial Roll, on profiling the advantages of roll forming, as well as the company’s upcoming anniversary its exciting plans for the future.

In attributing reasons to Commercial Roll’s success, Schabel points to the company’s emphasis on well-developed ties with its customers.

“It is the strong customer loyalty that we have, which works both ways; it’s a two-way street,” Schabel said. “We are close with all of our customers and we have long-standing relationships with the customers and key people in those companies.”

According to Schabel, Commercial Roll always tries to provide the best of service, key to the company since its inauguration, adding that the company has the “level of service offered that maybe a competitor doesn’t recognize as being as important.”

Schabel believes that this competitive edge—and such a smooth run operation—allows Commercial Roll to present itself as the best in the market.

“Roll forming is typically geared toward fabrication, so No. 1 is volume. It is the most efficient way to make large volumes of a particular part, and it allows you to do it very accurately on a consistent basis,” Schabel said. “Accuracy and volume are the two main features of roll forming that people would look at it, rather than trying to make a form in a different form of fabrication.

“With the investments we have made over the years, we have always tried to keep state-of-the-art equipment—electronics and mechanical—which allows us to do a lot of value-added work [to a part], without having to handle it a second time, so it is done with very little labour.”

What further separates Commercial Roll from others in the industry is its personal touch.

“We take away a lot of the corporate stuff that can muddy the waters in the way we deal with our customers and our suppliers, so things happen quickly and effectively,” Schabel said. “We are very hands-on as owners…six days a week, here all the time, knowing what is going on in every corner of the building and people respect the fact that we participate. They appreciate our input and support as they do their jobs throughout the day.

This May, Commercial Roll celebrates 40 years in business. The company has come a long way from its beginnings, when Schabel’s father, described as “the main driver in the whole business since Day 1”, began the company with just two other partners. “He really is the one who brought it up to where it is today.”
“The year we moved into our current premise [a brand new building in which the company designed and built itself]—that happened to coincide with our 30th year in business—so at the time we had an open house to recognize our anniversary and to introduce our new facility,” Schabel said.

The current facility is a finely tuned operation, hosted in a 125,000 square foot structure, with a repertoire of 29 forming lines, 11 shipping bays, complete customization from cutting edge equipment and machinery, and ISO-9001 certification.

Asked of Commercial Roll’s plans for the next 40 years, look for the company to maintain its winning formula.

“We try to set up ourselves strategically, going to China, Mexico, the southern United States, but we intend to stay in Ontario and to be a Canadian manufacturer. That’s why we have been focused on having top-of-the-line equipment, which gives us a little advantage over our competitors and doesn’t increase cost [of production],” Schabel said.

“The hurdle right now with the high dollar…it can be quite challenging at times but we try to make sure we’re doing everything with our production equipment to make it as efficient as possible, to continue operating in Canada.

“When we compare our country to others, we recognize that we look toward the Europeans to see what they are doing because they tend to be ahead, so we look to them to see what the future may be for North America when it comes to the environment,” Schabel said.

With a motto of “proud to be Canadian”, that message truly rings home. As Schabel summarized, “We’re Canadian so we don’t want to just pick up and leave. We want to stay a Canadian company and continue to support the Canadian market.”