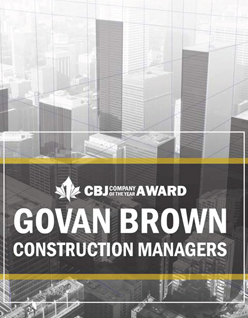 It all began with a handshake agreement. The principles of Govan Brown Construction Managers, based out of Toronto, sought to create a company that would be the first in its class in construction management—and the team today is celebrating an award that recognizes them for doing just that.

Govan Brown Construction Managers are the recipients of The Canadian Business Journal’s 2010 CBJ Company of the Year Award, and though the company never expected to receive the award, they were the clear winner in the competition (see panelists’ comments). Up against companies in industries from manufacturing to environmental services, Govan Brown has shown leadership and exceptional company management since its early days—and the principles of Govan Brown maintain that the handshake agreement on which the company was formed still stands today.

Principles John Brown, Ralph Govan, and Jon Taylor (who joined the company in 2003), have been in agreement on just about every move the company has had to make since its inception, and they say that the way they do business ultimately reflects on the company’s sound operations and will drive it towards future success.

Developers of an industry

Headquartered in Toronto, GovanBrown Construction Managers has organically rooted itself into a precedent-setting position for construction management—the company does about $180 million worth of corporate office interior projects and base-building every year. The company started in 1994 and had a vision to “do things differently,” says Ralph Govan, because they “had the right construction management tools, which was a relatively new process for delivering construction projects, at the time.”

Business boomed, and the partners quickly were able to empower their employees with the tools and training they needed to be leaders on the job. Govan told CBJ in a previous interview:

“It didn’t take us years to become well known and established as a leading provider of construction services.”

Now with offices in Calgary, Vancouver, Victoria and Ottawa, the company boasts about 130 field and office staff. Each and every staff is an integral part of the team, and they are likened to onsite project managers. The company is now viewed as the first to call in construction management. Govan Brown has done thousands of projects, and has executed flawlessly every time, contributing to the unrivalled reputation the company enjoys.

When Govan Brown took the market by storm, they were ahead of the curve for green building projects. Govan Brown’s history is characterized by Leadership in Energy and Environmental Design (LEED) projects. They support the Canada Green Building Council, and the company has been an active participant in the green building movement since it began. “We’ve built millions of square feet of green building space,” says Jon Taylor. And being green, under a wider sustainability umbrella, is what propelled Govan Brown to first place in the Company of the Year race. Currently the company is one of the most active interiors construction managers in building out LEED CI space in Canada. And as for being able to stay on the cutting edge of green building: Govan Brown has committed to providing the necessary and desired training for all staff that wish to be LEED experts. The company even pays for the training.

Govan Brown currently employs seven LEED AP staffers in Toronto and one in Vancouver, and the company has been an important part of local communities for many years (see sidebar for community initiatives).

Govan Brown has made a mark on the Canadian construction industry, but a sound environmental strategy is not the only reason the company won the Company of the Year Award. One of the most crucial things a Canadian business can do for itself in a competitive marketplace is stay innovative. Govan Brown has always been a leader in the realm of technology. They use a powerful project management software system called CMiC, which integrates project management and accounting programs, allowing Govan Brown to set up jobs and related sub-jobs within the system. The software can track projects wherever there is a web connection, and clients also have access to the site, so they can be a part of the process too. With a secure web log-in, clients can access up-to-the-minute details on all aspects of their project.

Govan Brown is the first contractor in Canada to use CMiC, so it has an exclusive ability to track all aspects of a project wherever there is an internet connection available. “This type of software wasn’t available when we started the business,” Govan told CBJ. “It’s an elaborate tool that has helped us establish a nationwide network between all of our offices. They are seamlessly integrated because of the program.”

A company with vision, and the team to execute

Govan Brown has always kept in sight the need to make staff priority No. 1, because the company realizes that their best-in-class employees are what make the difference to company growth. Now, it is a matter of transitioning the company into the hands of employees who will take it to the next stage, as Govan Brown delves into succession planning.

Being able to deliver nationally, the company strives to look “for growth in geographic diversity”, and so the next generation of managers will need to have the foresight to operate successfully in every region the business spans.

No project, however, is too big for the Govan Brown team. The company employs people who are committed to fostering company culture—one of the primary reasons that Govan Brown is CBJ’s Company of the Year. This area of excellence shows that Govan Brown is the “best of the best” in terms of teamwork and a sustainable approach to staffing: 25 per cent of the company’s original staff are still with them today.

The company runs many staff charity events, showing a teamwork approach to community development. Recently, Govan Brown ran a breast cancer campaign that raised over $77,000. The company has repeatedly been one of Canada’s Top 50 Best Managed Companies and Govan, Brown, and Taylor say that the Company of the Year Award “rewards our employees for all their hard work.”

Taylor says that it’s all in a day’s work for the Govan Brown employees, who operate under the “crushing pressure” of the industry they work in. “Any time we are recognized, our employees are recognized. They ‘are’ Govan Brown. Without them, we would not be able to win any award. It is their hard work and dedication to our customers that makes us who we are. An award like this is a solid validation of the efforts we put into every project, every day,” Govan echoes.

“We don’t micromanage our people—it is each of them doing what they do best that makes us the best at what we do. We have always known our core strength is our people,” Brown says.

The company has always been run with an open-door policy, and Govan says that the management team prefers to run business on a mentoring basis: “we want to operate as a family type business, not like a corporation.”

All things considered, when winning awards or doing business on a day-to-day, the CBJ team could not have said it better: Kudos to the Govan Brown team, because they are the ones who “make it happen.”