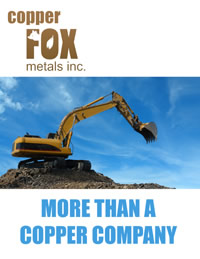 More than a Copper Company

Copper Fox Metals, established in 2004, is a Canadian resource company with plans to develop the world-class Schaft Creek Project in British Columbia.

Copper Fox holds the rights to acquire up to a 93.4% interest in the Schaft Creek Project following an option agreement with Teck Cominco that was established in 2002. Copper Fox has since earned a 70% direct interest in the Schaft Creek Project, which has excellent potential for resource expansion and new discoveries. To date, the project has an indicated resource of 1.4 billion tonnes, containing 4.76 billion pounds of copper, 4.5 million troy ounces of gold, 255.2 million pounds of molybdenum, and an astonishing 32.5 million troy ounces of silver.

Guillermo Salazar, President, Chief Executive Officer and Director of Copper Fox, has been in the resource business since the early ‘80s. With a strong consulting background, Salazar has the industry know-how to lead a team to resource production. His expertise includes engineering and geology, and Salazar says that his geology background is what makes him so curious about new developments. Salazar was hired to work at Schaft Creek several years ago, and says he “fell in love with the project then”. The reasons to get into business were many. “[Schaft Creek] was a geological challenge, and a geological success” he says. “At that time, I was involved with a bunch of discoveries in Peru and Mexico, and I got tired of travelling all around to different countries – including Canada. I wanted to settle” he says, citing family as a reason to take roots in Alberta.

Schaft Creek: A world-class project
In September 2008, Copper Fox released a National Instrument 43-101 compliant Preliminary Feasibility Study, indicating that the deposit at Schaft Creek can be developed as an open pit mine. The study confirmed the viability of the Schaft Creek project, and outlined the strengths of the project, which include an advantageous location, low capital expenditure requirements and operating costs. Of course, Copper Fox expects to have metal recoveries from the project.

At that time of the study, it was recommended that Copper Fox proceed towards doing a full feasibility study, something that Salazar says the company is still aiming to complete, despite a difficult economy, and financial obstacles. “Money is an issue for everybody. The most important thing for Copper Fox is that we survive. We may have to extend our timeline a little bit, as we need about $10 million dollars to complete our feasibility study. That’s our first order of business” says Salazar. However, the company’s goals remain: to advance Schaft Creek to production in an environmentally and socially progressive manner, and become a significant minerals producer by 2013.

“We have spent a total of about 40 million dollars in order to develop a site that will produce resources for the next 30 years” Salazar says, adding “that is what makes our potential world class. And the fact that we can produce gold, copper, molybdenum, and silver”.

Being good neighbours
Copper Fox has also developed world-class community relations, something a company needs to do in their area – especially considering their anticipated longevity.

The company has developed a tight relationship with the Tahltan Nation. It has done so by communicating in an honest and transparent way, and by participating in events and initiatives important to the Tahltan Nation. Copper Fox provides financial support to the Tahltan Language Camp, which is a week-long camp designed to promote and preserve the Talhtan language. Copper Fox also offers financial backing to a Youth Science Camp geared towards Tahltan youth.

Salazar says that being close with the community is imperative for Copper Fox. “We have to be good neighbours. There have been a few issues that we’ve had to deal with, including development issues, especially assessing the environmental impact of our operations.” The other important issue for Salazar, as a geologist it to make sure “that our neighbours the Tahltan nation are always of the most concern to us”.

Salazar and his team have endeavoured to keep Copper Fox in the top tier of resource companies. They are focused on development, and continue to forge ahead in 2009.

“We shall survive, and we will make the Schaft Project into a mine. Being able to produce the amount of resources that we will, and still having unexplored targets is phenomenal.”

On September 15th 2008 Copper Fox released a National Instrument 43-101 compliant Preliminary Feasibility Study. The study indicates that the deposit can be developed economically as an open pit mine and recommends proceeding forward towards a full feasibility study.

Copper Fox Metals and the Tahltan Central Council, on behalf of the Tahltan Nation including the Tahltan Band and the Iskut First Nation are offering a merit-based scholarship to a Tahltan First Nation student planning to attend the University of Alberta to study in one of following programs: Education, Nursing, Medicine, Physiotherapy, Nutrition, Law, Engineering, Geology, Agriculture, Social Work or Native Studies.

The Copper Fox Scholarship is a new undergraduate program for students attending the University of Alberta. The scholarship will be provided over five years max ($15,000 per year). The Copper Fox Scholarship covers tuition, regular student fees and books for students studying at the University of Alberta for up to five years. Continued support under this program depends upon maintenance of satisfactory academic standing and enrolment in a full time program that will lead to an undergraduate degree.

Copper Fox Metals is the sole contributor to the fund. Award winners are selected on the basis of academic performance, career goals, brief biography, role model qualities, and volunteer and leadership contributions to their community. Academic performance, residency and career interest are considered in the selection process. Applicants who wish to pursue a career in the mining industry and traditional studies are favoured.