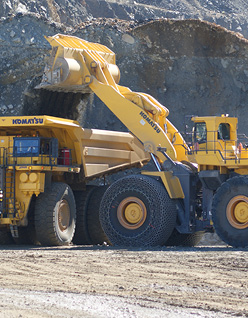 With copper prices climbing, companies exploring the world’s most prolific copper zones are gearing up to capitalize on the resource. Developing the Copper Mountain Project in southern British Columbia is Copper Mountain Mining Corporation (CMMC)—a company focused on  becoming a mid tier copper and precious metal mine to produce approximately 100 million pounds of copper per year by mid 2011.

The company’s exploration strategy is carried out in an area located 20 km southwest of Princeton, BC, which is an established mining jurisdiction, making the company’s activities relatively low-risk. The property is about 18,000 acres of prospective mining land held under a combination of 135 crown grants, 132 mineral claims, 14 mining licenses, 8 cell mineral claims and 12 fee simple lots.

Copper Mountain’s mine represents one with a calibre that has not been seen in British Columbia for more than a decade. The open pit mine is a copper-gold porphyry style deposit that will provide thousands of direct and indirect jobs to the local and provincial economies, for over 15 years. Over the lifespan of the mine, it will produce 1.5 billion pounds of copper, 450,000 ounces of gold and 4.5 million ounces of silver at an operating cost of $1.30 per pound of copper.

Jim O’Rourke, CEO of CMMC, equates the success of the project and being on track with the company’s low risk approach to development. The project itself is fully financed to production, due to a partnership with Mitsubishi Materials Corporation, which means that there is minimal financial risk—a welcome element of stability for the company. The company also has about $40 million in cash on hand, according to O’Rourke, and “construction is going well—on schedule, and on budget,” he says. The company’s development plan is based on using existing infrastructure as much as possible, and each facility in the project is located in a strategic location.

Keeping risk to a minimum

Analysts following the company have been surprised at the progress Copper Mountain has made, O’Rourke says, and this progress has a lot to do with CMMC’s commitment to mitigating as much risk as possible. “We have received all of the permits we need and signed an Impact Benefits Agreement with the local native band (USIB),” O’Rourke explains.

The company is insistent on watching environmental issues, and have developed strong working relations with local industry and social groups to make sure they are on top of any challenges that arise. Due to the area’s past production activities, there is minimal additional environmental damage done to the region through CMMC’s mine resurrection. The company is committed to completing reclamation of tailings and also to saving energy by evaluating power saving alternatives with BC Hydro. The community has been behind the company’s activities since day one.

“The local community has been extremely supportive,” O’Rourke says. “The project is low risk because we have a paved road right to our mine gate, and with the town behind us and major equipment on site, there is no risk with regards to delivery.”

Staying in tune with the environment

Part of being environmentally responsible means dealing with the property in development pre-and post-production. CMMC is involved with tailings reclamation at the sites where they are developing, and are committed to avoiding environmental risk as part of their low-risk model.

The company has looked to Envirogreen Technologies, a company based in Vancouver that is receiving hydrocarbon contaminated soil (from abandoned gas stations etc.) and treating these soils until they are rendered inert and usable once again. “Using these technologies there is fairly good growth after treatment, and site can be returned to their prior use, providing a natural environment for wildlife,” O’Rourke says, adding that the permitting process Copper Mountain and other developers go through is extremely thorough.

In the past, Copper Mountain has had great exploration success and management believes that significant exploration upside still exists on the property. In 2007, the company completed one of Canada’s largest drilling programs and increased its resource base to approximately 5 billion pounds of copper, which equates to a 45% resource increase.. At that time, the company completed a Titan 24 deep penetration geophysical survey on an area 13 km² covering the existing pits. According to company reports: “The Titan survey results have been interpreted with the aid of three dimensional inversion programs and outlined several large areas of high chargeability, both near to surface and at depth 9. The currently known mineralization and the interpreted geological model correlate well with the chargeability anomalies, providing confidence in the survey interpretation. These targets will be drill tested as part of future exploration drilling programs.”

O’Rourke and his team continue to have reason to be optimistic about their June target. “When we purchased the property in 2006 and set our target timeline, we managed to meet them to date,” he says. Therefore the overall schedule of the project remains unchanged with construction planned to be completed by the end of April 2011 for plant commissioning in May and full production in June. “We have an extremely strong management team at the site and we’re confident we’ll meet our goals, and make shareholders and the stakeholders very happy.”

There is an abundance of potential for shareholders of CMMC. Indeed, those looking at potential for the Copper Mountain Project need only look at this company, and escalating copper prices, to see where value lies in Canadian resource development.