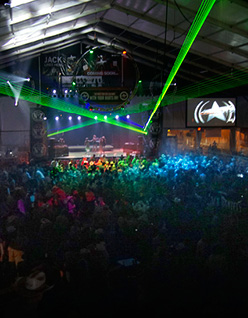 “The Most Fun You Can Have With Your Boots On!”

Paul Vickers, the owner of Penny Lane Entertainment and Cowboys, says, “Outside Las Vegas, there has never been a casino grouped together with a club, a concert venue, a restaurant and a pub all in one place and under one roof. Canada has never seen this. We have all the best signature restaurants and entertainment brands, and we have put them all under one roof. Calgary, or Canada for that matter, never had a venue that provides entertainment in the style of Cowboys Casino.

“We in Canada and in Calgary especially are subject to weather, and standing in lines for entertainment outside in -40C in snow and rain is not much fun. The new Cowboys Casino is different. The Calgary Light Rail Transit train goes straight into our building, so Calgarians can get to Cowboys well-sheltered from the weather element, which is a major concern.”

Penny Lane Entertainment sees the appeal of the new Cowboys Casino as an adult playground for Calgary, comparable to the adult entertainment zone of Universal Studios. The plan is to raise the entertainment value of Calgary as a whole, giving Calgarians and the world a one-of-a-kind entertainment venue and offering the entertainment hungry patrons a Dance Hall, Zen 8 Grill, Melrose Café & Bar and a state-of-the-art concert and corporate events venues — a place where people can eat, drink and play.

In the past, Sports Illustrated has voted Cowboys “The Best Bar in the NHL,”; Stuff Magazine refers to Cowboys as one the “Top 10 Parties in North America” during the Calgary Stampede, while USA Today boldly deemed Cowboys “One of the Top 3 Mega Bars in North America.” In the 10 days for the Calgary Stampede, Cowboys’ allure, offering the best in live entertainment, has generated herds of entertainment-hungry fans and followers. Penny Lane Entertainment built the new Cowboys on this reputation and plans to turn it into Calgary’s fixed attraction, quenching the thirst for entertainment.

Vickers stated further, “Drawing on this tradition, we want to adapt the Las Vegas style, switching from the common Canadian ‘gaming first’ casino model, to ‘food and beverage first’ model, because people are not interested in gambling as much as they are interested in entertainment. In Las Vegas, the food and beverage revenues exceed the gaming revenues, and that’s what we believe will turn Cowboys Casino into a highly sought-after and highly profitable venture.

As people visit Las Vegas to see a show rather than gamble, they will visit Cowboys to see a concert, to dance at a night club, watch their favourite hockey team’s game or a UFC fight, and have a beer at Melrose, which offers more than 200 kinds of beer; or have dinner in our Zen 8 Grill restaurant and see a show. All under one roof, we see gambling only as a part of the entertainment, not the main attraction. There is something for everyone.

“Besides completely avoiding the weather element, the all-under-one-roof model also offers a strong safety element where, under security personnel and surveillance, people can feel safer when having fun as they tend to be more reserved in the way they entertain themselves. Even the City of Calgary appreciates this protective aspect of the venue to the young generation.”

Penny Lane Entertainment believes that the Cowboys Casino complex will become a major tourist destination in Calgary and in Alberta. From dealers and security to bus boys and service staff, the new venture will create over 500 new jobs. The rejuvenated Cowboys Casino complex plans to pump new excitement into Calgary’s vibrant entertainment zone, bringing together the best of North America’s entertainment and hospitality brands, and shining a new, refreshing spotlight on Alberta, turning Calgary into the entertainment capital of Canada for 52 weeks a year.