Cracking Down on Offshore Tax Cheats 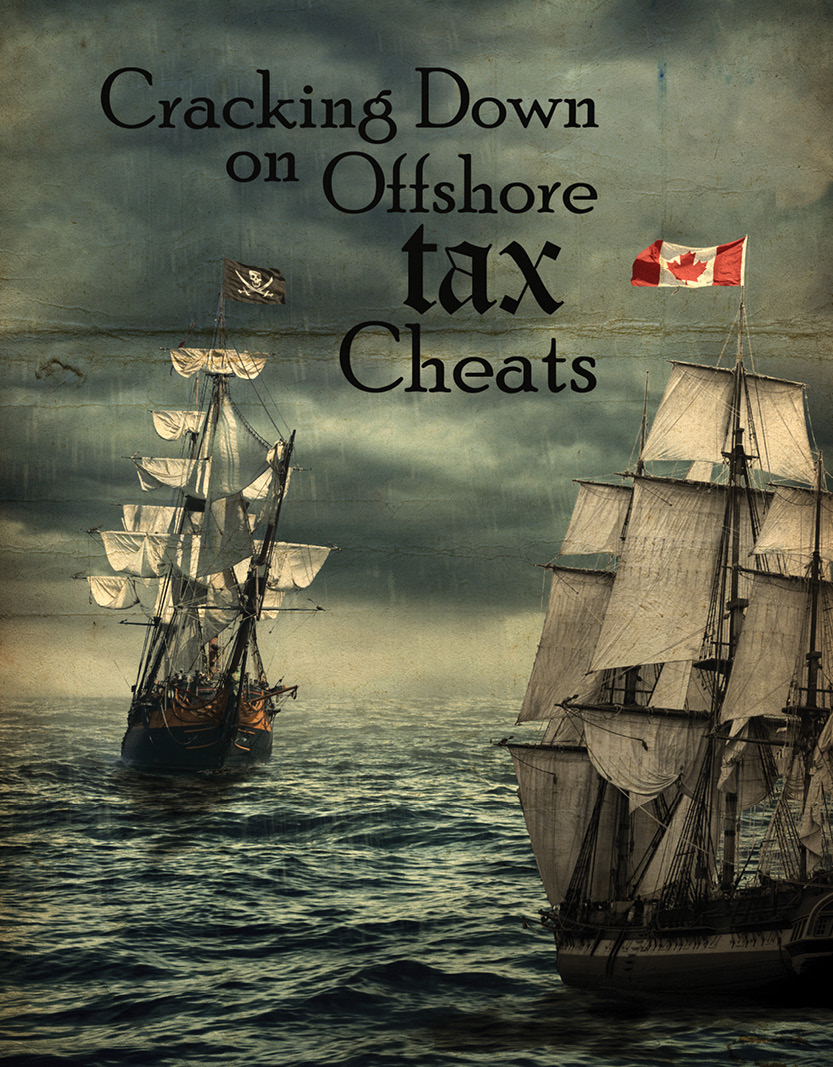 If you are a Canadian with offshore property and income, be advised there are new reporting requirements due to changes imposed by the federal government and there are signs to indicate they are serious about making people pay. The move comes following a good deal of criticism that the government had not been doing enough to prevent people from easily evading the taxman.

Meanwhile, The Organization for Economic Co-operation and Development says new international rules to fight back against corporate tax evasion could be in place as early as next year. The Paris-based organization has a three-step game plan, which if implemented, will establish the infrastructure for global co-operation on the controversial issue – including Canada.

Data from Statistics Canada shows that Canadian money hidden away in the top 12 global tax havens has hit a new record of $170 billion. Canadians For Tax Fairness says international tax havens are costing Canada at least $7.8 billion annually in lost tax revenue each year. While there are any number of countries where hiding money is a possibility, the British Virgin Islands, Cayman Islands, Cook Islands and Singapore are often singled out as the most serious offenders in terms of concealing assets by wealthy foreign individuals and companies.

Since the start of the year, the federal government has announced a series of new laws and regulations in a more aggressive effort to combat tax evasion, including announcing a new “SWAT team” comprised of six to 10 federal officials to crack down on Canadians with accounts hidden in offshore tax havens. Part of the change in attitude may have arisen due to a fair degree of negative public perception that not enough was being done to track down these offenders.  Canada’s non-participation in a widespread investigation by the United Kingdom, the United States and Australia only raised eyebrows more, providing skeptics with more ammunition that our overall level of concern was far too low.

The CBJ had an opportunity to speak with former Minister of Natural Revenue Gail Shea following an announcement about the new policy that she helped to develop, prior to her moving on to the fisheries portfolio in a Cabinet shuffle last month by Prime Minister Stephen Harper.

It was Shea who made the formal announcement of the launch of a strengthened Foreign Income Verification Statement (Form T1135), one of the Economic Action Plan 2013 measures to crack down on international tax evasion and aggressive tax avoidance. Minister Shea also met with members of the Certified General Accountants Association of Canada (CGA-Canada) to discuss taxation issues, including how best to combat international tax evasion and aggressive tax avoidance.

“Our government is committed to combating tax evasion and getting tough on tax cheats,” Shea told us. “We have introduced important new measures to strengthen the Canada Revenue Agency’s ability to audit and investigate taxpayers who may be hiding offshore property. Stronger reporting requirements will provide the CRA with more information to crack down on those who attempt to cheat the system.”

Starting with the 2013 taxation year, Canadians who hold foreign property with a cost of over $100,000 will be required to provide additional information to the Canada Revenue Agency (CRA). The criterion for those who must file a Foreign Income Verification Statement (Form T1135) has not changed; however, the new form has been revised to include more detailed information on foreign property.

The CRA will use the additional information to ensure all taxpayers comply with Canadian tax laws, through activities including education and audit. Failure to report income from domestic or foreign sources is illegal, and Canadians should know that the CRA actively pursues cases of non-compliance. Tax evasion and aggressive tax avoidance can lead to significant taxes, interest and penalties.

These measures will build on the recent amendments made by Prime Minister Harper, first announced at the G-8 Lough Erne Summit in Northern Ireland. The G-8 declaration and the Harper Government’s Action Plan on Transparency of Corporations and Trusts are designed to uphold a higher level of transparency.

“I am proud that our government is protecting law-abiding Canadians by providing the CRA with the tools necessary to go after tax evaders,” says Mark Adler, MP for York Centre in the Greater Toronto Area. “Since 2006, we have introduced over 75 measures to improve the integrity of the tax system. New measures outlined in Economic Action Plan 2013 to tackle international tax evasion and aggressive tax avoidance will result in concrete benefits for all hardworking Canadians. I am pleased that our government is engaged with stakeholders about this serious and pressing issue.”

The revisions to the law also proposes to extend the reassessment period for a tax year by three years if a taxpayer has failed to report income from a foreign property on their income tax return and Foreign Income Verification Statement (Form T1135) was not filed, late-filed, or included incorrect or incomplete information concerning a foreign property.

“We are pleased to see the government taking action on this important issue. Increased reporting requirements of large offshore assets will help to ensure that all Canadians are operating on a level playing field when it comes to their taxes,” adds Carole Presseault, Vice President of Government and Regulatory Affairs at CGA Canada. “Our members support the fight against tax evasion, as it hurts all Canadians by reducing government revenue that other law abiding taxpayers are required to make up, and providing an unfair advantage to those seeking to cheat the system.”

In addition to the new filing requirements, Economic Action Plan 2013 proposed other strong new measures to combat international tax evasion and aggressive tax avoidance. These include: the new Stop International Tax Evasion Program; the mandatory reporting of international electronic funds transfers over $10,000 to the CRA; and, streamlining the judicial process that provides the CRA authorization to obtain information from third parties such as banks.

Minister Shea also recently announced the creation of a dedicated team to implement these measures and a $30 million investment to target international tax evasion and aggressive tax avoidance.

It can be easy to see why so many responsible, honest tax-paying citizens had grown angry with the system, which at best seemed rather lethargic in its attempts on crackdowns.  Part of that stems from the fact the government convicted just 44 people with criminal tax evasion related to offshore assets between 2006 and 2012. It’s a number many people find incredibly low.  However, the government has not provided any details on those convictions, citing privacy concerns. Pressed by a freedom of information request and related queries, the Canada Revenue Agency finally turned over 25 names. There just doesn’t appear to have ever been much of an appetite to put resources towards chasing down tax cheats.

Recent leaks of financial records from several Caribbean islands as well as the South Pacific have only fuelled the justification that greater efforts to crack down are necessary.  British Prime Minister David Cameron, French President François Hollande and international organizations like the OECD have all echoed those sentiments, saying hundreds of millions – if not billions – could be lost due to the failure of a certain percentage of the population not properly declaring offshore income.  The figure is so high because it’s only those who stand to lose a great amount in taxation that would bother to go to such extremes to avoid paying.

A tax haven is “a jurisdiction with no taxes or a very low rate of tax, a lack of transparency in the operation of its tax system, and a lack of effective exchange of information with other countries,” the Canada Revenue Agency says on its website. “Tax havens usually also have strict bank secrecy laws. There is often little or no economic activity in a tax haven.”

As part of new measures unveiled in Finance Minister Jim Flaherty’s federal budget earlier this year, the Canada Revenue Agency will now reward whistleblowers up to 15 per cent of the federal tax collected, for information leading to tax assessments exceeding $100,000. The government also requires banks and other institutions to report international electronic fund transfers of $10,000 or more.

“Every year the vast majority of Canadians file their income tax returns on time,” Shea continues. “They apply for the benefits and credits to which they are entitled and they pay their taxes that are due.”

If you file your own taxes, look over the forms and supporting documents for accuracy. If you have someone else calculate and file your taxes, realize the preparer assumes no liability for error. Some companies offer protection in the event of an audit for a fee. If you are worried about an audit, you may want to invest in this protection.

As long as you can prove your income and your eligibility for tax credits and the appropriate accompanying receipts to justify the deductions you have claimed, there should be no problem. Make payments on time as required, and if you cannot meet the normal deadlines, make arrangements to stay in good standing with the CRA.

“Unfortunately some Canadians go to great lengths to avoid paying their correct amount of taxes. When they do this they put an unfair burden on all law-abiding Canadians who understand the importance of playing by the rules.”

Keep in mind the penalty for a tax evasion conviction in Canada may take the form of a hefty fine or a combination of a fine and imprisonment.