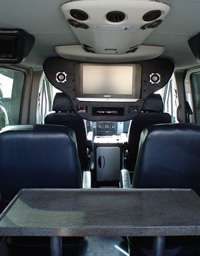 Leading the way in vehicle modification

The business model is simple: modifying and selling vehicles for peoples with disabilities.

The approach illustrates the impressive structure of Creative Carriage, the St. George, Ont. based firm that established in 1988 and has seen success due to the company’s commitment to being first in the market—Creative Carriage’s competitive edge—on top of its dedication to bringing innovative products to its marketplace.

Creative Carriage’s involvement in the transportation industry, with respect to its relationship with Transport Canada, has structured a strong reputation for the company in the market for knowing where the market is and where it is going in the future.

Its market is diverse, with vehicles in several sectors including wheelchair converted customized vehicles, buses, airport shuttles, patient transfer vehicles, communications vehicles, and more. Today, about 80 per cent of Creative Carriage’s business is seen through bus and van wheelchair conversions.

In speaking with Robert and Darryl Nunn, President and Vice-President of Operations, respectively, of Creative Carriage, the two leaders clearly believe the success of the company truly began when this gap in the marketplace was realized in the late 1980s. Presently, Creative Carriage has doubled in size, while sales grew by 100 per cent last year. According to the Nunns, that growth curve is only expected to continue.

All vehicles are fixed to meet Canadian motor vehicle safety standards, as restructured and modified vehicles must meet crash retesting standards. As an example, if a gas tank or fuel system must be modified in order to make that vehicle wheelchair accessible, it must be recertified to the proper standards, equal to the big-name manufacturer standards.

One example of vehicle included in Creative Carriage’s impressive fleet is the patient transfer vehicle. These medical vehicles are described as a fairly simple design that does not include significant structural modification of the vehicle, meaning conversion is relatively lost cost and, because of that, this restructuring will continue into the future, in additional to buying and selling these vehicles.

At a time when many in the market were down, Creative Carriage only continued to grow. Save for the aforementioned doubling in sales, the company attributes a variety of reasons to the core of success, prime among those is strong business on the bus side, something in which the company believes will only see further future growth.

“Right now, we will probably manufacture a little bit less because there are some fairly large manufacturers, and now with the regulatory of Chrysler, Toyota, and Honda, they are starting to change their vans every five years, so the cost of the design and test versus how many vehicles you can produce gets very expensive,” said Bob Nunn.

“The vehicles are more sophisticated, especially the electrical systems, so we will continue buying and selling more, and manufacturing a little bit less—manufacturing only certain key products—and buy and sell the rest from manufacturers in the United States,” Bob said. “That is a change in our marketplace.”

Moving forward, the goal at Creative Carriage is to continue leading the industry by developing new products. Among those is an innovation soon to be released to the market that is the first built-from-the-ground-up wheelchair accessible vehicle. Produced by the American company Vehicle Production Group (VPG), a company affiliated with Creative Carriage, the vehicle is specifically designed for people with disabilities, meaning it does not need to be cut, converted, or modified. The Miami-based VPG will release the MV-1, a London style cab design which features easy access for the disabled. The vehicle will be imported and distributed throughout Canada.

Bob describes the VPG model as a “significant” development within the industry, designed from the ground up with no need for further adaptation, adding that it is “a fairly large growth curve because it is going to be a great commercial vehicle.”

Like many small companies, Creative Carriage believes one of many reasons for its success is its determination. A strong family operation only adds to that value. Added Bob, “We have a very good team of employees and you can’t have success as a company without a good team around you, so I think we have been fortunate over the years.”

Creative Carriage fully anticipates it significant growth curve to continue, notably over the next five to eight years and, as Darryl summarized, “Where we are going is where society as a whole is going. With the demographic change and the aging baby boomers, and the need for accessibility and consciousness surrounding it, there is an awareness to have the right product and the access to that product becomes more important.”