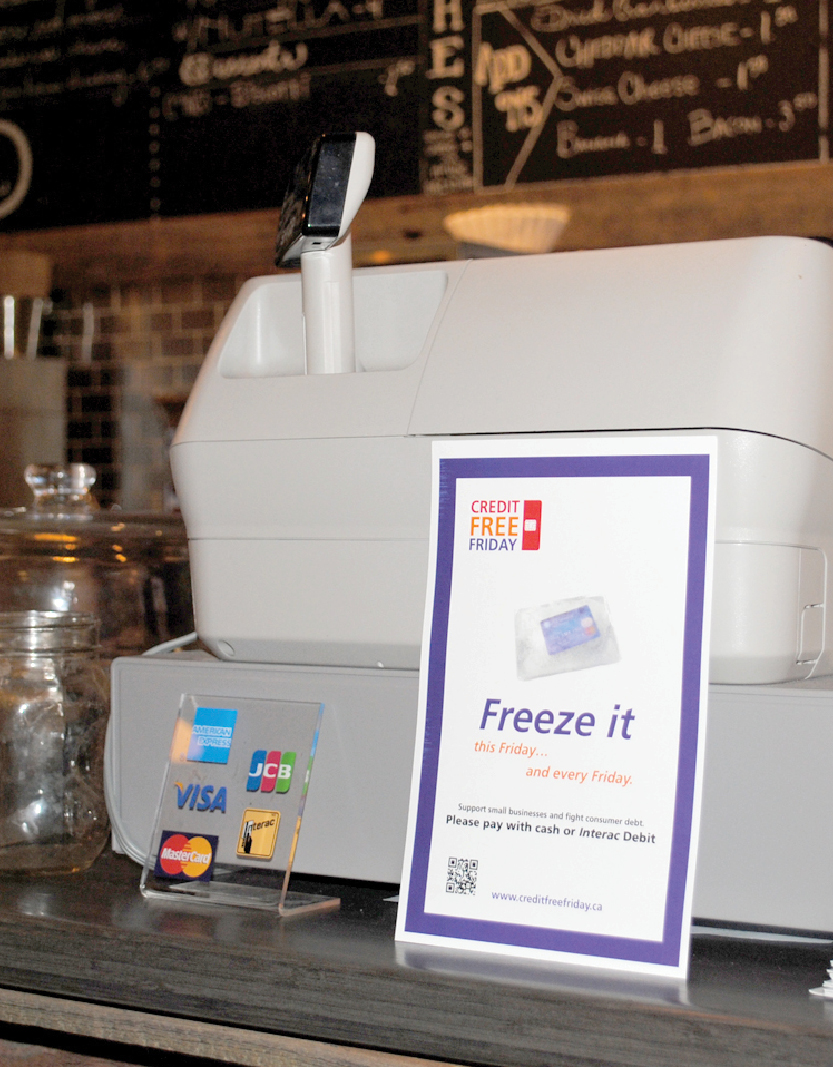 Most Canadian consumers do not know that every time they use a credit card for a purchase in small to medium sized businesses, 2 per cent to 3.5 per cent of the sale is lost to credit-card fees. These fees, which get divided amongst credit card companies (10 per cent), processing companies (10 per cent) and the banks (80 percent), add up: every year, retailers across Canada pay up to $7 billion in credit card transaction fees.

As part of Financial Literacy Month in Canada, the Canadian Federation of Independent Business (CFIB) teamed up with financial education advocate Gail Vaz-Oxlade to bring awareness to imbedded credit card fees and their impact on small and medium business.

In early November, Vaz-Oxlade and CFIB President Dan Kelly were in Kensington Market to launch campaign aimed at encourage Canadians to give their credit cards a break for one day a week. Credit Free Friday calls on Canadian consumers to help small businesses, and themselves, by paying with Interac Debit or cash when they shop on Fridays. Interac Association is a partner in the campaign.

The event took place at an independently-owned bakery called Wanda’s Pie in the Sky. Owner Wanda Beaver is indicative of the type of retailer increasingly challenged to absorb the high fees they are charged by the credit card companies and banks.

“With ever-higher tiers of premium cards hitting the market, [these fees are] only going up. As consumers are often unaware that the merchant loses on a credit card sale, Credit Free Fridays can be a great way to support small firms,” said CFIB President Dan Kelly.

The aim of the Credit Free Fridays isn’t to admonish credit cards, rather to encourage Canadians to be conscientious about where to use them. “Because consumers aren’t aware of it, they are not able to make the distinction about where they should be using their credit cards,” says Vaz-Oxlade.

“A lot of consumers don’t know that financial institutions charge retailers a significant amount of money when we use our credit cards,” she continues. “We know we pay a yearly fee of some kind. We know for those poor sods who carry a balance, interest rates can be pretty high. What we are less aware of is the fact that if we go into a retailer and spend $200 that retailer ends of paying $5 in swipe fees. That compares to the nickel they would pay if we used a debit card. That’s a huge gap.”

These fees, according to Kelly and Vaz Oxlade, affect not only the retailer, but the consumer as well. “For us to think, as consumers, that that’s not going to get passed on to us in some way is naïve. It is either passed on to us either in an increase in the cost of the goods and services we are buying, or those retailers are going to disappear.”

General credit awareness is something sorely lacking, according to Vaz-Oxlade, whose popular shows Princess and Til Debt Do Us Part track the progress of debtors from the red to the black. “We’re mesmerized by the promise of free points and free trips, but generally all we get when we pay with a credit card is a whole lot of debt we don’t need. The average Canadian now has $27,000 in debt, and credit cards are a big part of the problem.”

A recent online and commercial campaign to encourage small purchases on credit cards is particularly the type of message that Vaz-Oxlade and the CFIB are fighting. The #smallenfrueden (a portmandeau of English/German supposedly meaning “a feeling of enjoyment that comes from small things”) is a Visa campaign aimed at consumers for “using your Visa card for small purchases you’d make anyway,” while earning rewards points.

“Are they serious? Using a credit card to spend $1.12 on a pack of gum? How does that serve anybody but the profit line?” asks Vaz-Oxlade. “When we put profit before people, when we are prepared to make a profit off the backs of people who don’t understand what it is they are doing we know that we are hitting a level of disgracefulness.”

“And if you can’t go one day a week without using your credit cards, you have to wonder how the credit card companies trained you so well!”

Strong words from Vaz-Oxlade, but that’s what it takes when you’re up against the marketing departments of the largest banks in the country. And if we listen, we can put $1 billion back into the pockets of small retailers.