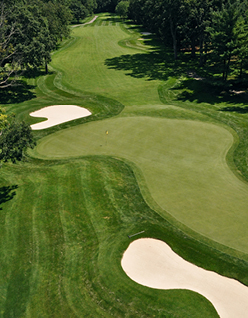 On par for greatness

Established in 1930, the Credit Valley Golf and Country Club is one of the country’s most distinguished golf and country clubs. A hidden gem, the private golf course is in the heart of Mississauga, Ont., within the serene setting of the Credit River Valley just north of Lake Ontario. The club’s easy accessibility belies the solitude of the picturesque calm of the Credit Valley, and the lands which originally belonged to the Lieutenant Governor at the time, W.D. Ross.

Located at 2500 Old Carriage Road, “the club is right in the heart of the city; but once you are in the valley you are in the middle of the country, it’s fantastic,” says Ian Webb, General Manager. “The valley environment and serene setting is paramount to the enjoyment of the facilities by our members.”

For generations, the challenging course and premiere facility have delighted members. “There is a great deal of family lineage here,” says Webb. “We start our juniors at age five, and they can become junior members at age 10 so we have many members who have been here for 30 or 40 years.”

The pristine golf course is accentuated by the modern clubhouse environment, family activities, socials and exceptional dining facilities. 90 per cent of the club’s 600 golf members live within 10 kilometers of the club in some of Ontario’s most prestigious neighbourhoods, yet, membership is engaging and diverse, and very protective of the “valley”, which they consider their own backyard.

Besides its members, the Credit Valley Golf and Country Club has welcomed many provincial and national golf tournaments, which are attracted to the course’s dramatic setting and challenging holes.

To augment the course’s high standards, a $1.7 Million renovation on the course’s first six holes began at the end of the 2011 golf season. “The top shelf has been redesigned to increase the shot values and aesthetic appearance of the course,” says Webb. “We have changed the first hole back to a par four, totally redesigned the third, fourth and fifth holes, added a new putting green, a short game practice area and created a dramatic panoramic view of the entire valley by adding a new sixth tee which overlooks the course some 120 feet below.”

Construction is 90 per cent complete and will be ready for the start of the 2012 season in April.

“We are extremely excited for our members to have the opportunity to play our new golf course. Everyone is excited. We are anticipating it will be in full swing by the end of May.”