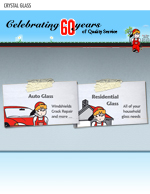 Crystal Glass is a company that specializes in repairing and replacing auto glass, windshields, residential and commercial glass. From fixing broken windows to producing custom mirrored closets, shower doors and table tops, Crystal Glass offers a variety of services. when Ed Bean, Crystal Glass Founder, was just 21 years old. He borrowed a vehicle from his dad—a 1940 Ford Coupe, to be exact—and began to sell glass around Edmonton, Alberta. Transporting glass in a car proved to be difficult, so Ed built a wooden rack in the trunk for glass that was bigger than two square feet. Five months later, he graduated to a half-tonne truck, complete with the company name on the side panel.

In 1954, Ed landed a $15,000 loan and purchased an old service station on Whyte Avenue—his first real shop. It was in the 1950s that Crystal Glass took off and started to expand and add more locations. They haven’t slowed down since. Sixty years later, the company has 57 locations all over Alberta, Saskatchewan and British Columbia, a staff of more than 520 employees and an impressive fleet of 320 trucks.

Industry Changes
When you’ve been in the business for 60 years, there are bound to be changes in the way things are done. According to Ed, the biggest changes he has seen in the glass industry have been technological. Ed remembers a time when there was no such thing as curved windshields and automated glass cutting didn’t exist. “What we used to cut by hand, is now done by machine,” Ed explains. “If we had a piece of glass that was eight feet by 10 feet, I used to have to kneel on top of it on a cutting table. Now everything is etched, shaped, polished and tempered by a machine. The human hand barely touches the glass until it’s done. It’s a marvel when you think about how we used to do it.” It’s not just the process that has changed; it’s also the product itself. Terry Bean, Ed’s son and President of Crystal Glass, adds that “the automobile windshield is entirely different now. It used to be the glass only kept the wind out of your face. Now, it’s a structural part of the vehicle. You need that windshield in front of you in case of a crash because it deflects the air bag and supports the car roof if it rolls over.”

Because of safety factors, windshields are now glued in with adhesives as strong as the steel they are bonded to. These new urethane adhesives have made it more difficult to take them out to replace. “One of our people invented a tool to do that,” says Terry. “It’s called The Extractor. We patented it, and now manufacture and sell it around the world as the tool of choice for removing windshields.”

“You have to know a lot to change a windshield,” says Harry Mann, Vice President. “Our service employees are technicians now. Long gone are the days when you could replace most windshields with a few hand tools. Proper training on an ever increasing variety of new products and methods is key in today’s market.”
Safety is something that has greatly impacted the glass industry, which is why tempered glass is becoming a widespread standard. Tempering is essentially heat treating the glass to make it stronger. If it breaks, it will shatter into dime-size pieces with dull edges. “More building codes are calling for glass on first levels be tempered,” explains Harry “The growth in tempered glass has been very steady over the years. We see it being used in a lot more than in hockey rinks and glass shower enclosures.” Crystal Glass has two glass tempering plants: one in Swift Current and one in Edmonton. Their openings have proved timely. “Production at both plants has seen excellent growth” says Harry. Along with our auto glass business, tempering glass has been a very successful addition to our product offering.

Community Involvement
Ed Bean personally, and Crystal Glass as a company have made a lasting commitment to serve its community. Whether it’s day camps or little leagues, Crystal Glass is invested in giving back. Their main charity is called Crystal Kids, a program that has been around for 17 years. Located in downtown Edmonton, Crystal Kids serves disadvantaged and impoverished children, providing a safe place for them to hang out after school. The facility offers sports and recreational activities, as well as a library and computer lab.

“I’ve always been interested in supporting communities,” Ed beams, “which is why we got involved with Crystal Kids. We continue to raise funds for the facility on a daily basis.” Crystal Glass is also heavily involved in the communities they do business in, contributing to organizations such as Girl Guides, CNIB, United Way, and the YMCA. One charity in particular that the company finds itself quite attached to is Camp HeHoHa (short for Health, Hope, Happiness). This camp is located at Lake Isle, 100 kilometres west of Edmonton and is built specially for physically disabled children and adults.

Along getting involved with several noteworthy projects, Ed joined a group of local businessmen to purchase the Edmonton Oilers Hockey Club years about 10 years ago. Interested in keeping the Oilers in the city, the Edmonton Investors Group members purchased the team from then-bankrupt Peter Pocklington for $103 million. They just sold it a few months ago, to a fellow Edmontonian.

Here’s to 60 more
Crystal Glass has a lot to look forward to in the coming years. But first things first: it’s their 60th anniversary this month! The company is hosting a huge celebration featuring famed country singer, Terry Clark. Everyone is very excited and that’s the immediate focus right now. Beyond that, there are a few goals on the horizon.

Employee ownership is one of them. In the late 1970s, Crystal Glass formed a new company with some of the long-term employees, which evolved into the Crystal Employees Corporation. As of July 2008, both companies were amalgamated, so Crystal Glass Canada is now owned partially—40 per cent—by employees. The ownership structure has been so successful that the company wants to continue in that direction. “Our intention is to continue to invite employees to have ownership in the company,” explains Harry. “Ed has graciously given us a good deal and we have employees that are entertaining purchasing shares in the company. By the end of the year, we will probably have 200 or more employee owners.”

Crystal Glass is also interested in expanding into new locations. After all, it’s what the company has been doing all along. “We’re currently examining two or three more locations,” says Ed. “I’m looking forward to seeing this company expand more, which will be really exciting with the employee-owned aspect. We’re very excited about the future.”