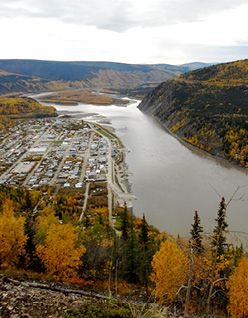 “The eyes of the mining world are on Dawson City”

A stroll through the main street of Dawson City, Yukon, is like taking a step back to the days of the late 1890s gold rush, when thousands of prospectors flooded the city in search of gold and riches.

Many prospectors stayed and made Dawson City their home, setting up businesses and hotels and theatres, earning Dawson City the nickname “the Paris of the North”, and the title of largest city north of San Francisco.

As its name implies, the rush didn’t last forever, and the population deflated from 40,000 to about 8,000 people by the early 1900s, but not before more than $96 million in gold had been found in Dawson City’s creeks.

Today, Dawson City celebrates this colourful heritage by maintaining the original Gold Rush architecture from those days. You could almost mistake the main street for a movie set, until you venture in to any of the town’s saloons, bars, hotels or stores to find that Dawson City is still a thriving and vibrant community with an active, multi-million dollar industry in mining, hospitality, and tourism.

Evelyn Pollock is Manager of the Dawson City Chamber of Commerce, who works closely with the town’s migrating work population which swells in the summer months to accommodate an extraordinary amount of mining, exploration, and expediting work.

“We have a small population, but the revenue that goes through Dawson City is enormous, and our job is to enhance business growth and economic prosperity in the area,” says Pollock.

One of the biggest events on the Chamber of Commerce’s schedule is the annual Gold Show, and industry and consumer trade show “encompassing the diverse and interconnected sectors of our regional economy, with mining at its hub. You name it… come look for it at the Dawson City Gold Show.” The Gold Show provides revenue for the Chamber of Commerce to operate for the rest of the year.

“The gold show has been running for 26 years and is an excellent resource for the mining industry,” says Pollock. “This year we have at least 70 exhibitors inside the arena and another 15 outside, which is a huge draw and a great networking tool.”

The exhibitors come for the contacts, says Pollock. “The bigger companies come for public relations. We are very conscientious of the fact that we live in pristine wilderness and so there is a concern that you get when large companies come in, so larger corporations use the Gold Show as an opportunity to show they can get in there, do their job and do the reclamation work, and share that information with people as well.”

It’s an opportunity for companies to have their presence felt and say thank you to the community, says Pollock.

It’s a particularly exciting time for the Gold Show as Dawson City is in the middle of another gold rush, after huge quantities of gold were discovered two years ago 95 miles south of Dawson City by Shawn Ryan and Cathy Wood (of Underworld Resources Ltd.), 2011 Mining Persons of the Year.

Following the discovery, Kinross Gold acquired Underworld in a massive $139-million takeover in 2010 which ignited a staking frenzy for “the first time in the history of the Yukon and which is still ongoing,” says Pollock. “It’s that big of a phenomenon.

“The past two years Dawson City has been capitalizing on the renewed interest in the gold industry, and is enjoying a real boost to its economy because of the discovery. The eyes of the country are on this area.”