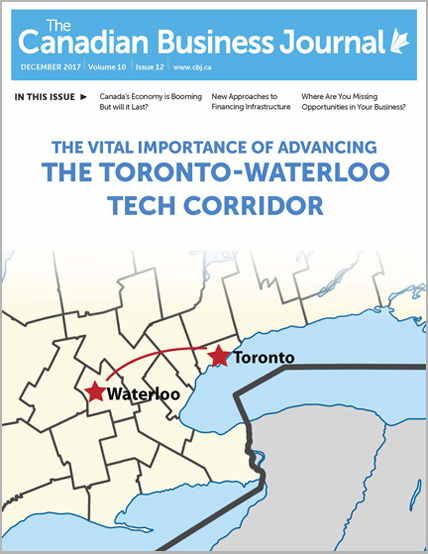 Technology is without a doubt going to be a major economic driver for this country, replacing the traditional industrial corporations. In fact, the trend is already well underway and it’s only going to gain momentum with each passing day. For that reason, Canada must continue to innovate and be amongst the world leaders in developing new technologies; our future economy depends on it. The great news is that we have one of the most established tech superclusters anywhere in the world in the Toronto-Waterloo tech innovation corridor. Now that it’s leveraged a great deal of success the critical next step is to ensure it continues to flourish because international competition is fierce. It’s our feature story in this issue.

A report co-authored by BMO Chief Economist Doug Porter Montreal concludes that ending the North American Free Trade Agreement would harm the U.S. and Canadian economies, while simultaneously hurting their competitiveness against regions such as Europe and Asia. According to the bank’s report, ‘The Day After NAFTA,’ dropping the 20-year trilateral free trade agreement would result in a 0.2% net reduction in U.S. gross domestic product over the next five years and a 1% decrease for Canada. That 1% equals billions of dollars, by the way. The Trump administration has tossed about the notion of having a bilateral agreement between just Canada and the U.S. If that’s what it takes, assuming the terms are fair, then our government needs to take it. You can be darn sure Mexico wouldn’t be banging the drum for us if we were the ones left on the sidelines.

On the downside of technology, who would have ever thought (in the past) that simply hailing a ride
from a service similar to that of a taxi would end up potentially violating people’s personal information? Uber Technologies can’t confirm how many Canadians may be affected by an October 2016 security breach that the riding-hailing firm initially tried to cover up. As many as 57 million people worldwide may have had their private information compromised by hackers who got into Uber’s main data system. What’s even worse is that Uber didn’t publicly report the breach and worse yet has since admitted to paying the hackers about $100,000 to destroy the data on customers and drivers. Did the hackers destroy the data? They said they did. Hey, if you can’t trust a hacker, who can you trust, right?

Tis the season when the malls are jammed with shoppers and credit cards are getting a full workout – but that’s January’s problem. It’s always a great boon for retailers, and for some it’s a time when they earn a sizable percentage of their annual revenue. About $5 billion in food & beverages is purchased at large retailers over the Christmas season. Other big-spend items are about $600 million on televisions and audio equipment; $425 million on toys; about $400 million on computer products; and $200 million each on cosmetics and sporting goods. Suffice to say there are many more categories that total in the millions, but with the exception of food & beverages, those are the largest presents under the tree. 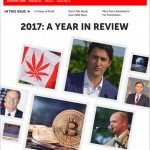