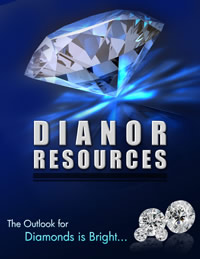 The Outlook for Diamonds is Bright

Dianor Resources Inc. is a Quebec-based mineral exploration company with a diversified portfolio of diamond properties, at various stages of exploration and development in Quebec and Ontario. The company’s main focus and mandate is the discovery of commercial diamond deposits in Canada through focussed exploration, strategic partnerships and acquisition of high quality diamond properties.

Mr. John Ryder became the President of Dianor in January 2002 and has over 30 years experience in mineral exploration worldwide. For eleven years, he conducted exploration programs for RTZ as a senior geologist, in Ireland, Scotland, Germany, and Saudi Arabia. Between 1991 and 2001, he was a private geological consultant in the exploration field of gold, platinum and diamond exploration in North, South and Central America.

Ryder’s commodities exploration experience commenced in 1973 and his interest and contact with diamond resources came entirely by accident in the early nineties through exploration in California. He has been in the diamond business ever since.

Ryder has recently been back and forth to Wawa, Ontario, where he is monitoring the progress of the company’s unique Leadbetter property.

Dianor’s involvement in the Leadbetter property began with a visit in late summer of 2004. The diamond property was discovered by a local prospector, Joe Leadbetter, who found diamonds by panning in the Magpie River, just North of Wawa. Up to that time, this panning method of diamond recovery leading to a discovery had never occurred in Canada. The panning of river sediments by Mr. Leadbetter resulted in the discovery of two diamonds, a 1.09 and a 0.25 carat diamond. Subsequent panning and prospecting by Mr. Leadbetter resulted in the recovery in December 2003, of a 1.39 carat gem quality diamond from a tributary of the Magpie River in Chabanel Township.

Ryder explains why the discovery in Wawa is unprecedented in Canada:

“In the days of the California gold rush, people found gold by panning the sand in the rivers of the Sierra Nevada Mountains and elsewhere. In diamond exploration, panning for diamonds is not normally the primary method used. When Joe Leadbetter located the potential source rocks of the alluvial diamond found by him, he sent samples of the rocks from the property to a laboratory for examination and analysis. The lab didn’t find just diamond indicator minerals, which is how one would normally discover diamonds; instead, they found diamonds in the 2.7 billion year old rock, a conglomerate rock. Further investigation by Dianor recovered gold, rubies and sapphires from the conglomerate. There is nothing like this in the world, the only comparable rocks of the same age are in Australia and the Witwatersrand conglomerate of South Africa which has produced 40% of the worlds gold over the last 100 years. The discovery of Leadbetter inherently makes it unique for the industry.”

The Leadbetter property is not only unique in discovery, but also the way it occurs.

“The diamond bearing conglomerates outcrop on surface over 1.7 kilometres, readily accessible by road and close to infrastructure in a historic mining area. This keeps costs down and allows work to be conducted all year round compared to other diamond projects which tend to be located in isolated areas. Also the exploration, mining, processing and recovery of diamonds are relatively benign with the absence of any toxic chemicals. Diamonds are recovered by crushing the rock, concentrating the heavy minerals and recovering the diamonds from the concentrate by x-ray machines, in essence a rock crushing exercise similar to road aggregate, except we remove the diamonds. The only material leaving the property would be the diamonds.” Fortunately for Dianor, it was discovered that the Leadbetter environment is not the only environment conducive to this type of diamond exploration in Canada. There are nine different areas in Quebec where similar rocks have been discovered by Dianor. Diamonds, including rare coloured diamonds (pink, purple, green, yellow etc.) have been recovered from six of the properties to date.

Although there is money to be made in diamonds, Ryder has stated that in recent years, the diamond exploration industry has been relatively quiet taking a backseat to commodities like oil and gold. “In Canada, the population is generally unaware of the presence of diamonds here and most people find it hard to believe that Canada is actually ahead of South Africa in diamond production. In 2007, Canada was the number three diamond producer in the world after Botswana and Russia. Currently four diamond mines are in production in Canada.”

Of course, with blockbuster movies showing the dark side of the diamond mining industry in some countries, potential investors may be harder to find. “People still think that the diamond industry is secretive, when in fact, since the millennium, major companies that used to hold a monopoly on the resource no longer have the same influence. The diamond industry from exploration, mining, diamond sorting, cutting, polishing, trading and retailing has undergone and is continuing to undergo a seismic change.” Ryder says that because you need healthier capital resources to get into diamond exploration, many are hesitant to get into the industry.

“You can assay a rock sample for gold at $30-35 a sample. That is nothing compared to the costs associated with diamond exploration. A rock sample to recover indicator minerals and diamonds can cost as much as $6,000. In classical exploration for kimberlite type diamond targets one could easily spend up to $5-6 million per year in basic exploration like collecting and testing soil samples. And of course, if you don’t get the immediate results, your investment is deemed a risky one. Investors were not making a lot of money with diamond exploration companies compared to companies in commodities like gold, copper and zinc. However, in today’s sub-prime meltdown world, it appears we are now all equal in share price declines.”

The odds aren’t good for finding diamonds, but Ryder has had success, and drives on. And he is aggressive with good reason. “Diamonds are a unique entity – we only have a world reserve of 17 years left for diamonds. Diamond prices have been increasing steadily since 2000 because of the reserve is decreasing. Sometime between 2010 and 2012 there will be a shortage of diamonds. As any smart investor knows, once you have a supply and demand imbalance, prices will increase due to shortages and the industry will have to get aggressive and find new diamond deposits to supply their customers, otherwise you lose your customer.”

Ryder points to the emergence of Asia as another factor in the demand for diamonds. “Just seven or eight years ago Asia consumed approximately 4% of the world’s diamond market, now they consume 16% of that same market. There is a huge demand over there.”

Ryder is less concerned than most about the economic instability North America is engulfed in. “There have been no major world class diamond discoveries in the last 10 years, so that’s why Leadbetter is going to hold strong. We’re at an advanced stage of exploration, permitting for bulk sampling to allow us to take up to 50,000 tonnes of rock to recover 13,000 + carats of diamonds for valuation. There are very few companies who are at this stage of exploration. Dianor is in an extremely good position for growth. And of course, the demand for diamonds is not going to diminish as long as people covet diamonds. Even though it’s an unstable market, we’ve completed the exploration work necessary to advance the Leadbetter project for less than $20 million, so we’re set to reap the potential rewards. If Leadbetter is proven economic then we would be looking at a low cost mining scenario.”

Dianor completed a $7 million financing in July in a bad market signalling a confidence in their diamond projects in Ontario and Quebec.

Dianor is environmentally conscious, and socially responsible. In Quebec, the company is partners in their diamond exploration with the local Cree community of Wemindji, through their private company Wemex.

Ryder’s outlook is a positive one: “Dianor is in a good position, even in this desperate market.” 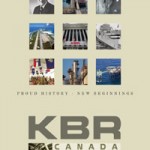