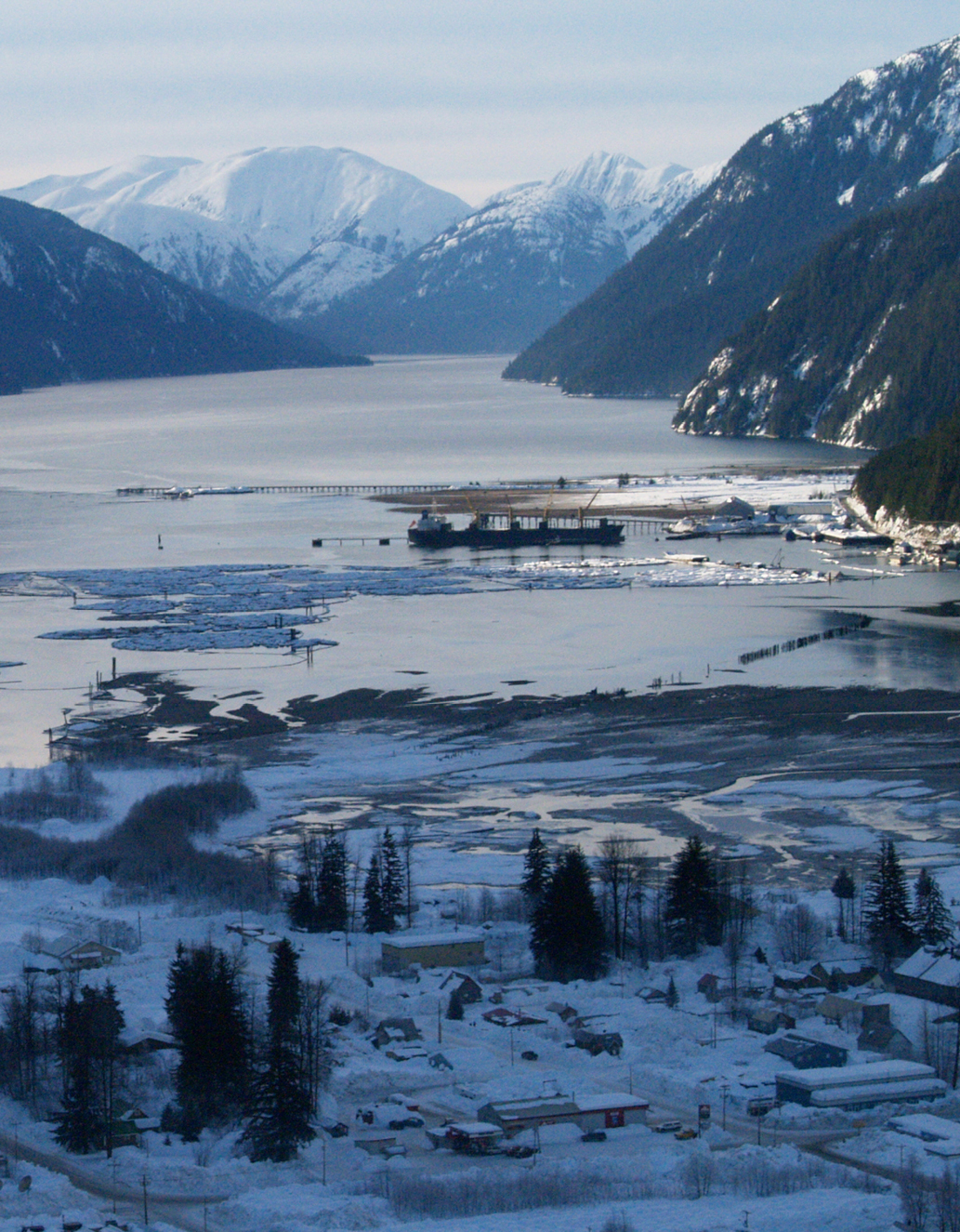 After a long history of gold, silver and copper mining, the District of Stewart in Northwest British Columbia still holds plenty of riches – literal and figurative – waiting to be discovered.

Sitting on Canada’s Western border, between the majestic glaciers of Alaska’s Misty Fjords National Park and the northern bank of Portland Canal, the District of Stewart is a small but significant town. It is surrounded by nature, yet a centre of resource industry. Most vitally, it sits at the heart of Northwest British Columbia’s Golden Triangle: one of the richest mineral belts in the world, having already produced millions of ounces of gold and tens of millions of ounces of silver. Mining exploration and production in the region have driven the town’s development.

Stewart mayor Galina Durant says the town’s location remains strategic today, especially in regards to mining. “British Columbia has long been recognised for its exceptional mineral wealth, but our location in the Golden Triangle is very special and stands out from all the rest,” she claims.

“We’re very rich in gold, silver and copper. Not only that, but we’re also on the coast and have a port facility. Compared with other ports, we’re one day closer to the Asian market and our port is ice-free, with a marine climate that allows year-round port operations. High winds are rare. Ships can anchor in Stewart on good holding grounds close to ship loading areas. In addition to our year-round operational port, the town itself offers mining companies affordable housing, school, hospital, skilled labour and low taxes.”

The town’s logistical advantages, while attractive to mining companies, also benefit the thriving forestry and tourism industries brought about by its plentiful woodland and beautiful scenery.

Stewart has been attracting prospective miners for more than 100 years. Established in 1905, the town was named after early prospectors in the area called the Stewart brothers. In 1910, Stewart’s population boomed as people including gold rush pioneers rushed to get their hands on the area’s bountiful riches; during the Great Depression of the 1930s, however, its population fell.

Stewart’s history has been shaped by the major mines operating around it. The first was Premier Mine, opened in the 1920s, which was the largest gold mine in North America until its closure in 1952. The Premier property went back into business in 1989, when a company called Westmin Mines built a mill, an open pit mine and an underground mine there. These operations stopped in 1996 due to lack of reserves.

After Premier came the Granduc copper mine, which operated from 1969 to 1978. As Durant remarks, the legacy of these mines is still alive and Granduc mine, in particular, is starting to attract interest from companies eager to exploit its far-from-exhausted reserves.

Seabridge claims its Kerr-Sulphurets-Mitchell project is one of the largest undeveloped gold projects in the world, with proven and probable reserves totalling 38.2 million ounces (Moz) of gold and 9.9 billion pounds of copper. Pretium Resources owns a 90,000-hectare land package around 65 kilometres north of Stewart, where it holds a high-grade gold resource of 8.5Moz Indicated and 2.9Moz Inferred. NovaGold holds Galore Creek, one of the world’s largest undeveloped copper-gold-silver deposits, which is forecast to produce 6.2 billion pounds of copper, 4Moz of gold and 65.8Moz of silver over an approximate 18-year mine life.

Durant says these projects are “very promising” and hopes the companies will use Stewart’s private port, the Stewart Bulk Terminal, for export once their mines are in production. “However, with the number of mines around us, [this port] won’t be enough,” she remarks.

“We are advertising our town as an investment opportunity and last year we found a private investor to build a Stewart World Port, which will accommodate RORO [roll-on, roll-off], break bulk and outbound concentrate cargos, barge vessels up to 6,000dwt [dead weight tonnage] and HandyClass ships with a minimum capacity of 20,000dwt. The District of Stewart will lease the land and the investor will build the port. So our target is to build a barge ramp latest by 2016 and to have a fully upgraded port by 2020. It will mean a lot for our community and the region.”

Far from being exclusively a mining town, Stewart also has a long history of forestry. “When I came to Stewart, there was a logging truck in almost every household,” remarks Durant. Although the market suffered a few years back, now the industry is beginning to pick up again and last year the town invested around $300,000 in upgrading its log processing facilities.

“Right now we don’t do anything with the waste, but this is another business opportunity,” Durant says. “I would like to see a wood waste plant in our town, because we have a lot of wood waste and Hemlock wood around Stewart and while it is probably not as good as cedar, it is certainly good enough for pellets to use in biofuel production.”

Stewart also has a plentiful supply of gravel, which washes down from the mountains and collects in the Bear River. Sitting in the river, the gravel increases the chances of flooding, so the town is keen to find someone to extract it.

Astonishingly, Stewart attracts around 40,000 tourists every summer – that’s 80 times more people than the town’s 500 residents. Durant explains that this is less surprising if you take into account the town’s many attractions. “First of all, there’s our nature – it’s spectacular,” she remarks.

“There’s no pollution, it’s green and we have the fifth largest glacier in North America, which is rare because you can access it by road. The second big attraction is Grizzly and black bear viewing – when people visit Stewart they often visit Alaska too and in Alaska we have a bear viewing platform, where people can watch the bears catching the salmon.”

Stewart also has camping grounds, a mining history museum and, despite its small size, many good hotels and restaurants. So beautiful are its natural surroundings that film directors have chosen to film Hollywood blockbusters here: the most recent being Insomnia, starring Al Pacino, and The Thing, starring Mary Elizabeth Winstead. The winter season attracts snowmobiles and heli-skiers.

For all its potential, Stewart remains a very small town and community. Durant describes its 500 inhabitants as like a “big family” in which everyone knows each other. She recalls how, when coming to settle in Stewart with her Canadian husband – having left her home country of Russia – the town’s people welcomed her with open arms.

“It wasn’t an easy transition for me; it was all different,” she says. “So looking back, I think the best thing about this town is the people. Because these people – through floods, fires, avalanches and economic ups and downs – this little community has survived. Prosperity has come and gone, then come and gone again, but the spirit of this town is alive, it’s strong and you feel so secure, like you’re part of a big family.”

Durant is clearly very passionate about Stewart, professing she cannot imagine living anywhere else. “Everything I have is because of Stewart,” she adds. “It certainly has a very special place in my heart.”

The mayor’s love for the town drives forward her desire to revitalise and expand it. While Durant’s number one priority this year is to begin building the second port, she also wants to continue paving its roads, to build a boardwalk over the estuary, to clean out its nature trails and more.

“We also have a school building in town which has been closed for many years, and we would like to get permission from the Minister of Education to convert it into a community centre, where we’d put a new library, youth centre, senior centre, and District Office,” she adds.

In the longer term, Durant would like to see the town’s economy become more diverse, so that it may be more secure financially. “When it’s based on just one industry, such as forestry or mining, it is subject to market fluctuation,” she says. “So one of my dreams is to see high-tech industry in Stewart – why not?”

Most important to Durant is that she sends a positive message out to the world that says: “We are open to any kind of business and would like to welcome more people and businesses into our town.” For a small, century-old mining settlement, the District of Stewart has remarkably large ambitions.