Home | Features | June 12 | Does Your Organization Leverage Its Extended Mind?

Does Your Organization Leverage Its Extended Mind? 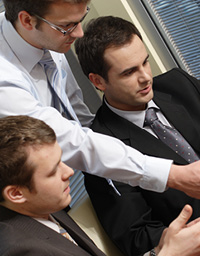 My team and I attended a meeting with a potential client to discuss the merits of external innovation as it related to their innovation needs.  We walked into an extremely well appointed conference room and around the table were eight R&D and PhD folks. After a brief introduction to the people sitting at the table, we were extremely impressed by the level and volume of accomplishments by our vastly superior and formally educated hosts.

To answer this question lets first look at the process of getting a PhD. The PhD process is extremely grueling. One must commit a few years, sometimes course work and most times have a Master’s degree, which is preceded by an undergraduate degree and usually an impressive academic high school career. The candidate must then present a thesis or dissertation that they must defend in the presence of a panel of expert examiners or at the very least their work must be worthy of publication in a peer refereed context.

Upon success the PhD student leaves the rigid sociological norms of the ivory tower and enters into the larger organization (for the purpose of this discussion) that focuses on hiring the best and the brightest. These large organizations are designed to harness the collective will of all the hired individuals around a specific set of objectives and strategies. In the case of most large organizations that comes down to stock prices, shareholders and the core competencies of that organization in relation to its particular industry. In this context predictability becomes important and as a result processes and values emerge over time to maintain a certain level of stability. This fosters a certain degree of Group Think, which rewards incremental innovation over innovations that could cause disruption to current models and processes.

Group think is described as “a mode of thinking that happens when the desire for a certain level of harmony in a decision making group overrides a realistic appraisal of alternatives.” When this happens group members try to minimize conflict and reach consensus without stepping outside of the collective box. Don’t think this happens in your shop?

In its simplest form imagine the conference room that I entered. All of the males were specifically wearing dark suits (grey or blue) with ties and mildly uncomfortable shoes, while the women’s clothing were a bit more varied, however all were wearing medically unsound shoes that have long lasting ramifications on backs, knees and feet. Alternatively we could have all been dressed in jeans, jogging pants and t shirts, which would have been more comfortable and we could have all been walking around barefooted like Steve Jobs at Apple’s headquarters circa 2008 (important to note that Jobs did not allow people to wear suits at Apple), but we were not.

In its more complex form in a typical meeting like this most R&D folks even though very creative and full of ideas understand that the processes and values of many large companies do not support disruptive innovation that would foster new streams of revenue or shake up their entire industries and potentially increase market share and customer retention. This phenomenon was captured by Durkeim’s work “Rules of Sociological Methods”.  In this work he explains:

“If I do not submit to the conventions of society, if in my dress I do not conform to the customs observed in my country and in my class, the ridicule I provoke, the social isolation in which I am kept, produce, although in an attenuated form, the same effects as punishment….” He eventually comes to the conclusion that “A social fact is to be recognized by the power of external coercion which it exercises or is capable of exercising over individuals, and the presence of this power may be recognized in its turn either by the existence of some specific sanction or by the resistance offered against every individual effort that tends to violate it”.

This creates a real conundrum for any company that needs to be innovative to maintain competitive advantage and indeed survival in a world where competitors come from inside and outside their given industries (Think Apple, RIM, Google or Hyundai and GM)

In the work entitled the “Extended Mind” Andy Clark and David Chalmers asked where does the mind stop and the world end? This question led them to looking at our “gameified” world and the classic game of Tetris. Clark and Chalmers found a piece of work done by David Kirsh and Paul Maglio. Below
is a quote from that work:

“In Tetris, falling geometric shapes must be rapidly directed into an appropriate slot in an emerging structure. A rotation button can be used. David Kirsh and Paul Maglio (1994) calculate that the physical rotation of a shape through 90 degrees takes about 100 milliseconds, plus about 200 milliseconds to select the button. To achieve the same result by mental rotation takes about 1000 milliseconds.

Kirsh and Maglio go on to present compelling evidence that physical rotation is used not just to position a shape ready to fit a slot, but often to help determine whether the shape and the slot are compatible. The latter use constitutes a case of what Kirsh and Maglio call an `epistemic action’. Epistemic actions alter the world so as to aid and augment cognitive processes such as recognition and search. Merely pragmatic actions, by contrast, alter the world because some physical change is desirable for its own sake (e.g., putting cement into a hole in a dam).”

Clark and Chalmers go on to add” In these cases, the human organism is linked with an external entity in a two-way interaction, creating a coupled system that can be seen as a cognitive system in its own right. All the components in the system play an active causal role, and they jointly govern behavior in the same sort of way that cognition usually does. If we remove the external component the system’s behavioral competence will drop, just as it would if we removed part of its brain. Our thesis is that this sort of coupled process counts equally well as a cognitive process, whether or not it is wholly in the head.”

With this work in mind I would then suggest that this would also extend to the organization. For an organization to truly be innovative it must leverage coupled systems to increase its collective cognitive ability and increase its speed of discovery.

Back in September 2011, using a game called “Foldit” which, was released by the University of Washington, game players deciphered a very specific protein that causes Aids in monkeys. What is disruptively astonishing is that this problem has baffled industry specific PhDs and scientists for 15 years, but took the 236, 000 gamers 10 days to solve. In the recklessly fast pace of the 21st century it may be time for your organization to start thinking about how it can leverage its “External Mind” because group think is a killer, Just ask the folks at, Lehman’s, Kodak, RIM, Yahoo, Facebook, GM, and the nearest pension plan in any “developed” country.