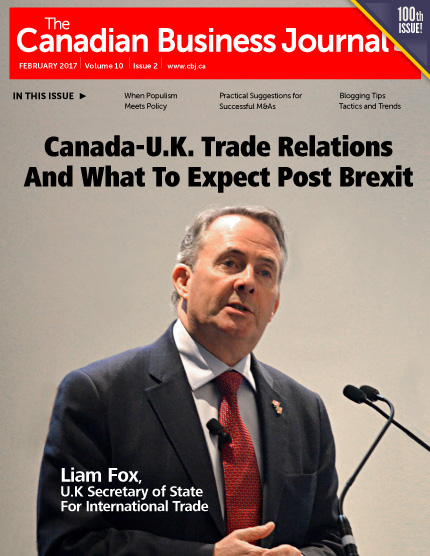 Our cover story this month examines the future of business trading between Canada and the United Kingdom now that the Brexit process in full gear. Although Britain won’t be completely extricated from the European Union for at least another two years, the country is already sending out assurances to its major trading partners that current relationships will remain status quo, and in fact should in many instances provide an even stronger bond. Liam Fox, the U.K.’s Secretary of State for International Trade, addressed a large business audience at the Toronto Region Board of Trade, where he outlined what to expect over the next couple of years. In summary, Canada and the U.K. will remain solid trading partners as they’ve always been.

The federal government has sent clear signals that it fully intends to do everything possible to work with the new Trump administration in the U.S. Whether or not the ideals are anything similar – or vastly different – won’t get in the way of doing business for the simple reason that it wouldn’t be economically viable to do so. One such industry whose fortunes may look brighter is oil and gas. A prime example would be TransCanada, which was told to reapply for the Keystone XL pipeline project, which had been shuttered by the previous Obama administration.

Donald Trump has only been in power for a matter of weeks but already his presence is having an impact on global markets. The U.S. Federal Reserve kept interest rates unchanged at the start of February, but painted a relatively rosy picture of the U.S. economy that suggests it is on track to tighten monetary policy this year. The Fed is still awaiting clarity on the possible impact of Trump’s economic policies.

Back in the day, Canada’s very own BlackBerry (formerly Research in Motion) had the international market cornered on smartphones. Those were the good old days. Now, Apple dominates the market, having topped its rival Samsung for the first time in five years. No doubt the entire battery fiasco and fires didn’t help with Samsung’s PR. With that all now straightened out, it will be interesting to see if Samsung can reclaim top spot next year. 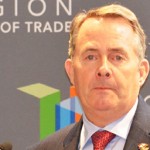