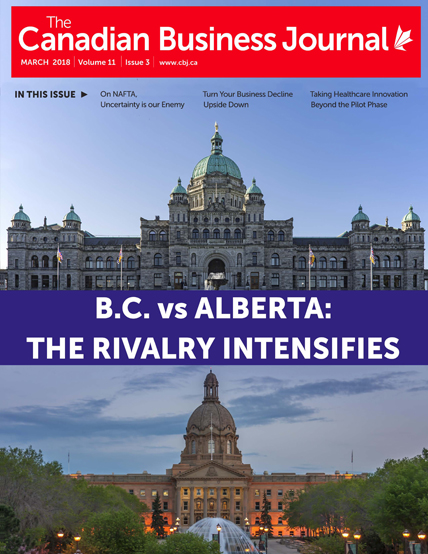 B.C. and Alberta have consistently engaged in a healthy form of economic competition that has no doubt been a contributing factor in enhancing the overall quality of products and services they provide not only within their own jurisdiction but throughout Canada and beyond. However, a nasty spat has emerged between the two western provinces and it all has to do with the expansion of the Trans Mountain pipeline. Alberta and the federal government want to proceed, but B.C. is putting up a number of barriers, in addition to protests made from other areas including First Nations and environmentalists. B.C. says it wants assurances that it will be compensated should there be a catastrophic accident. It also likely wants to receive a larger share of the net proceeds that will be heading Kinder Morgan’s way (the owner of the pipeline). More often than not arguments tend to be resolved once each side agrees on monetary terms. But for now the project is stalled. It’s our cover story this month.

Ford’s President for North America was recently let go due to an internal investigation that revealed behaviour deemed to be inconsistent with the company’s code of conduct. The automaker did not provide details on what specific indiscretions were involved. Raj Nair was relieved of his duties, effective immediately. He apologized within a statement issued by the company, without elaborating on specifics. It seems these alleged inappropriate actions and misconducts just continue on a never ending basis. While there is never any place for physical, emotional or psychological improprieties within the workplace, each case needs to be closely scrutinized to determine if there was in fact something amiss. This type of inappropriate behaviour does happen in the workplace, but it’s also not beyond the realm of possibility that some stories could be fabricated for any number of reasons. Let’s just be sure everyone is given due process. The last thing we need is to have people’s lives ruined on false claims.

Job growth in 2017 was revised slightly higher by Statistics Canada. From December 2016 to December 2017, the economy created 427,300 jobs on a seasonally-adjusted basis, the annual revision showed. The 2.3% increase over the course of last year was the fastest job growth since 2002. That’s the type of positive news we like to hear about.

Did you know?… In iPhone ads, the time is always 9:41am, because Apple events start at 9am and new product announcements typically happen 40 minutes into a presentation. The static time of 9:41am indicates you should be right up to date on the latest breaking news. 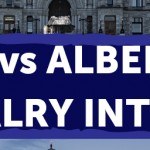