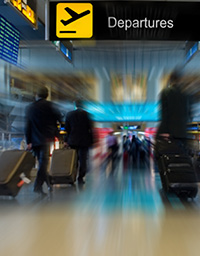 In October 2007, Edmonton International Airport (EIA) launched a major expansion plan to meet its growing passenger totals, a campaign that truly ties in with the airport’s slogan, “we’ll move you.”

The project’s total cost is an estimated $1.1 billion, though, because of the project’s prudent financial planning, that sum could be reduced by as much as 25 per cent. The project plans for 13 new aircraft bridges and overall improvements in efficiency, parking, retail space, and airport access. It surely is a major infrastructural refinement, particularly impressive given that the project occurs during a time of global economic uncertainty.

In the long-term conversion to the new development, EIA has created Terminal Express, an initiative that will allow for the ongoing operation of the airport even during this major construction timeframe. A temporary structure, Terminal Express began in 2009 and has been described as a “transition into the new facility.”
“Terminal Express is a temporary wing that helps us move passengers during expansion,” said Chris Chodan, EIA Director of Communications. “Over several months, we scrutinized every system and detail of our day-to-day operations, airline, security, and operations staff trained in the new facility.”

The EIA expansion project begins in Phase 1, with construction of an apron expansion, estimated at about 253,000 square metres, in accommodating the terminal expansion. This phase also includes the implementation of Terminal Express. The second phase of the expansion sees the subsequent construction of the new terminal expansion, while the third phase will construct the concourse linking the new terminal to its predecessor. The terminal will expand southward, adding 13 additional bridges, with the EIA bridge total climbing from 17 to 30.

“It’s a massive construction project, and projects of this size usually have the potential to hamper travel and cause delays,” said Chodan. “However, EIA is committed to excellence in passenger experience and that’s why we have minimized the number of terminal changes between now and the grand opening in 2012.”

According to the airport website, this development is critical to the ongoing success of EIA—the future for EIA truly means “Expansion 2012”. The project has acted as an economic catalyst for the Edmonton region, with, on average, 300 people working daily to build the expansion and, on peak days, that number climbs to 800 staff per day, according to Chodan. The project has created hundreds of local job opportunities, in addition to an attractive $390 million generated in local economic spinoffs.

The terminal and apron expansions are just two aspects to this extensive overhaul. The project also includes the new control and office tower, home to the NAV control centre, airport offices, and retail space, while the central utilities renovation, providing critical systems, like heating and air conditioning, is also part of the much-expanded new terminal.

Statistically, the planning of Expansion 2012 will see the terminal increase in size by 50 per cent, growing the number of gates and ultimately increasing efficiency, air service, and passenger experience, in addition to a greater selection of retail, dining, and service. The new infrastructure includes cutting-edge technology.

Of course, in taking on such a large expansion, the environmental policies of EIA must be highlighted, integrating the highest of environmental standards, such as utilizing waste water from landfills as well as using recycled materials in many key areas of the project expansion. Chodan added, “Architectural, engineering and material choices will reduce the amount of energy and water needed to run the airport. We’ve applied for LEED certification for the new terminal and tower.”
As Chodan noted, pursuing LEED affirms EIA’s environmental dedication in building to the highest of global standards. The goal for EIA is to develop top notch air service for the Edmonton region, done through a commitment to overall improvements in efficiency and ongoing development.

Truly a rejuvenation of EIA, Expansion 2012 styles as a “recreation of Edmonton’s dynamic lifestyle” in welcoming the world to Edmonton.

“Expansion 2012 will reflect our area’s beauty and its friendly, warm nature. The building’s design weaves in architectural elements representing some of our region’s most iconic natural and architectural marvels,” Chodan said. “Edmonton’s cultural flair will enliven the EIA experience.”