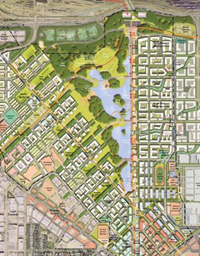 What’s currently just a midtown airport could soon be the crowning achievement of the City of Champions.

On Feb. 15, the City of Edmonton unveiled mockups of redevelopment plans of a cutting-edge community just a short drive from downtown. What’s now the decaying City Centre Airport is revisioned as a 21st century home to 30,000 people, an example to the world of all the best modern technology—and Alberta’s capital—has to offer.

That’s the plan, at least. Right now, Edmonton’s city centre redevelopment plan is nothing but sketches, ideas and dreams, but in true Alberta style, the dreams are ambitious.

“The opportunity is an outstanding one for redeveloping, ultimately, approximately 217 hectares of land that is right in the heart of the greater general downtown area for the city,” said Phil Sande, Executive Director of Edmonton’s city centre redevelopment project.

“It’s within four kilometres of downtown proper…and it already has planned for it an LRT (mass transit) station that will be in the south end of the site by 2014. So it gives us a chance to redevelop a property into an urban-form, highly sustainable development where the goal is to actually achieve a net-zero development onsite.”

That goal—to have the development look after its own energy without any input from the rest of the city—is a lofty one. Edmonton has its eye on green showpiece developments in Sweden, Germany and Amsterdam as examples of other large-scale sustainable projects.

However, those examples are new communities built on the outside of large cities—not in the middle of them. That presents the city centre redevelopment with some challenges, but also some big opportunities.

“You already have all of the arterial roadways in place,” Sande said, “so unlike a suburban new development, where you have to create all of that new infrastructure that would be coming up to the new subdivision that you’d be proposing—arterial roads, underground services, and then the long-term maintenance of each of those, including snow removal and things like that—this property already has that achieved completely surrounding it. So now what you’re allowed to do is really focus your funding and your development on the core property itself.”

The city will select the team to move with in the spring, and, over 15 months with the winning group, the city will work out details down to the nitty gritty, drawing up plots and streets, taking the best ideas from the five proposals put forth.

Sources for renewable energy are snuck into corners, and around 50 acres will be set aside for expansion of the Northern Alberta Institute of Technology(NAIT). Mockups make the pending redevelopment look bright and modern, but more important than simply housing more Edmontonians, the airport lands’ redevelopment will restructure the whole city.

“I think it’ll be a great thing for the city,” Sande said. “If you were to put 30,000 people into new developments in the suburbs as opposed to doing this type of an urban development, the city would incur more operational costs to maintain that. So it’ll save on that, so it’s one key component.

“Two, there’ll be more taxes generated per square foot, because it’s a denser development. You’ve got approximately 30,000 people on a 217-hectare site, so you’re getting more tax revenue that can be applied to all of those costs that a city incurs. Three, what you really have—and this is the part that I like—is an opportunity to create a city within a city, and have it fully integrated within Edmonton and all of the downtown area, with the neighbourhoods that surround it, with NAIT, with the large Kingsway Mall that’s sitting just to the south of this parcel, you can integrate it with existing opportunities and functioning businesses as well as the other residential neighbourhoods that surround it.

“And what you can provide inside of it is similar to potentially what’s over on (Edmonton’s hip and at times intoxicating) Whyte Avenue, or in the downtown area, or its own unique urban form of development that will actually attract people from other parts of the city and from elsewhere to come and be on this property, from retail, commercial, park space amenity, from all kinds of perspectives to come out and have a reason to be on the property.”

A very early preliminary estimate put the necessary assessments, leaseholds and infrastructure for the city centre redevelopment at $204 million. That’s a serious investment for a city, but that’s just a small fraction of what would be spent on the plot over a rough 25-year time frame.

That expense, coupled with the odds of another few oil booms draining Western Canada’s construction resources, would make some worried about how easily such a project would get off the ground. But with a high-cachet project like this, Sande said there’s no cause for concern.

“It’s an extraordinary opportunity for corporations to be able to put on their resumé, say that they were directly involved in a project of this magnitude,” he said. “We therefore look at it that we will receive bids on the tenders that we put forward.”

Of course, for all the talk about the current airport lands becoming Edmonton’s new destination neighbourhood, the redevelopment isn’t all fun and games. The city also hopes to draw innovative business. And it will have to build plenty of infrastructure as the boring counterpoint to all the exciting talk about net-zero sustainable homes and offices.

The city, however, feels secure in a key partner—NAIT. As the city stretches out the size of its campus, “NAIT will provide us information on sustainability as we go forward, and (act as) an incubator for businesses,” Sande said.

David Janzen, NAIT’s acting President and CEO, sees that role as perfectly suited for his school. A 14-year veteran of NAIT administration, Janzen pointed to an alternative energy technology program the school is starting in September, sending grads into the workforce just as early work on the development is slated to start.

“That kind of programming is very much synergistic with what is being planned as far as the vision for the redevelopment of those properties,” he said.

“The nature of the training that NAIT provides is very much related to providing our students with essentially what amounts to living laboratories…as part of their time at NAIT, and so we would look at this long-term development as one that would provide a very unique opportunity for our students and faculty and applied research folks to be actively involved in that.”

The project also wasn’t born without controversy. The City Centre Airport, smaller and less trafficked than Edmonton International Airport well to the south of town, would have required a sizable cash infusion to keep running, to say nothing of expansions needed to stay competitive.

Still, the closing of the airport was decried by some in Alberta, and not necessarily frequent fliers. The airport was used to fly the sick and injured from far-flung parts of northern Alberta, including populous Fort McMurray, a four hour drive to the north, into Edmonton’s Royal Alexandra Hospital for emergency treatment.

The issue was a provincial one, and not for the city to decide, but the debate could have tarnished the redevelopment’s lustre. Sande said the public has understood “the debate is not part of this part of the discussion,” he said, and besides, “that final runway will not be closed until the medevac issue is positively and appropriately looked after, which is what gives us strong confidence—and we think gives the public strong confidence—that that will be fully looked after in the best way possible before this airport is ever fully closed down.

“The airport remains as a functioning airport until a future council votes to close the balance of it.”

The public is being invited to look at concepts in person until the end of the month, and the full presentations of all five are available on the City of Edmonton’s website. The city doesn’t have its own data in yet, but reading through reports in the media, Sande said “much of it is striking me as being extremely positive.”

“What we typically find is the public is really good at pointing at certain elements in any of the designs and identifying whether they like that particular component or dislike that component,” he said.

And better choice for residents is, of course, the goal.