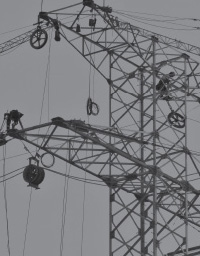 A Vision for Future Energy Solutions

What is your vision of energy solutions for the future? There’s no denying it’s a hot topic these days, but news commentary aside, there are a few things that need to be done. It seems like a monumental and costly tast. The Electricity Distributors Association (EDA), “the voice of Ontario’s local electricity distributors,” is at hand to clear a few things up.

With a clear vision of future smart grid and localised renewable solutions, and relentless efforts to improve and support the industry for its members, there’s a lot going on over at the EDA today. That’s why we felt it was about time to sit down with Charlie Macaluso, the EDA’s President and CEO, and look at how the past and present can best shape a bright future for the electricity industry.

With nearly a century in existence in various guises and positions, the EDA has seen a lot of change and development over its years since it was formed in 1912.

“It has a long history of representing the municipal utilities,” Macaluso says. “More recently, in around the turn of this century, the association reengineered itself to better address what was a new frontier.”

This frontier is and was the corporatization of the utilities. What had once appeared more as municipal bodies now stand as companies, public and privately-owned, and ready to meet the demands of their respective consumers.

“The focus of the association is really on helping utilities work together to build sustainable communities for tomorrow.”

And prepping for tomorrow, coupled by corporatization, has offered up a rejuvenated focus on issues such as renewables and conservation programs throughout the sector and the work of the EDA.

Members, Green EnergyLegislation and Beyond

When it comes to EDA members, Macaluso notes that there is a long history built on numerous ongoing partnerships and mutual goals.
“They’ve cooperated and collaborated (with us) on finding solutions to common problems, efficiency and sharing of expertise which is a long tradition of the association,” he says.

“More recently, since corporatization, the members work together to find solutions to today’s issues and approaching government and regulators in dealing with some of the approvals required. For example, today we’re working on helping to represent the utilities with implementing the Green Energy Act – implementing the smart grid.”

This is where things really begin to take shape as we search for our future electricity solutions, as Macaluso explains that “right now in real-time the (big EDA) issue is interesting.”

“If you had asked us even a few months ago it might have been a little different, but collectively the major focus of our efforts is implementing the obligations that we have under the new Green Energy Act,” he says.

These include, but are not limited to wind and solar energy, conservation issues, building the smart grid and beyond, which is where Macaluso says the EDA is at from an operational point of view. Related to this, a lot of the association’s focus falls on implementing the new roles, responsibilities and implementations under the new Green Energy Act and solving pricing issues.

“There is a high level of expectation to deliver these new roles and responsibilities. For example, as recently as only a month ago, our stats showed that over 10,000 applications have been submitted to local utilities, which we call LDC’s; Local Distribution Companies,” Macaluso says.

It’s a great notion and certainly one which many individuals favour, but what might this mean for the EDA members today?

A Local-Scale Input for LDC’s

In explaining just how the EDA envisages a smart grid, greener energy future, Macaluso says that in part, it comes down to localized, smaller-scale facilities which can bolster the large-scale plants we are likely more familiar with today.

“You could ask, ‘Okay, what does that include?’” It includes a vibrant, progressive company and the catalyst for building those communities for tomorrow,” he explains.

Macaluso says that working towards local energy solutions where small-scale renewable distributed generation could offer a prominent role for LDC’s doesn’t mean that large-scale facilities which are built and distributed across the province ought to be replaced, but it will be part of the vision.
“The future will be significant, small-scale, complimenting the large-scale operations. It is a vision of the LDC’s involved significantly in those local-type systems.”

“With the smart grid that you’ve probably heard about, (the aim is) to separate the smart grid from the current grid—which is still smart, but does things differently that we want for the future,” Macaluso says.

In fact, the smart grid is really the central component of the EDA’s vision.

Taking to the Smart Grid

Put simply, Macaluso says that unlike grids today, where we have power flowing across the lines from the plant to houses, the smart grid has energy flowing both ways.

“Your house or industry is a receiver but also a producer of electricity, able to take surplus electricity and shift it the other way. It also has information flowing across those lines, telling you more accurate information about your needs—so that’s what the smart grid is all about,” he explains, noting that such a grid takes time from an infrastructure point of view and a rework of the system.

Thanks to associations such as the EDA, we learn that getting to a smart grid electricity solution for the future can be done. A great part of the confusion and pre-conceived ideas we may have about these sorts of developments comes down to a lack of information and education. But it looks like we have little to worry about, because the EDA vision of small-scale renewable facilities, bolstering a sustainable and environmentally more-friendly smart grid network with more reliable and intelligent energy, is well on its way to becoming a reality.