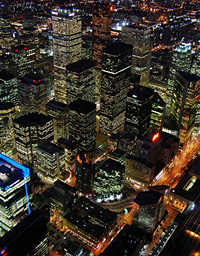 Here’s the smidgen of good news first before we delve into some cold, hard reality: Canada has once again beaten Russia.

That’s it for the good news.

And if this were about hockey, we could pump out our chests in all our patriotic glory, on the safe assumption we’d just finished first and second. But alas this is about international energy efficiency, where the two aforementioned countries finished second last and last based on a comprehensive scorecard put together by the non-profit American Council for an Energy-Efficient Economy (ACEEE) based out of Washington, DC.

ACEEE divided 27 metrics across four groupings: those that track cross-cutting aspects of energy use at the national level, as well as the three sectors primarily responsible for energy consumption in an economically developed country: buildings, industry, and transportation. The top-scoring countries in each grouping were: Germany (national efforts); China (buildings); the United Kingdom (industry); and a tie among Italy, China, Germany, and the United Kingdom (transportation).

The United Kingdom of Great Britain deserves the most plaudits for cumulatively leading the way for all the world’s 12 largest economies that were ranked; although the Brits really have nothing to brag about either, posting a rather humdrum 67 out of 100 – with 100 being representative of a perfect score based on policies and scoring currently in place. That’s an important footnote unto itself, as few would argue the policies themselves still have a great deal of room for improvement. Germany was a close second behind the UK at 66, followed by Italy and Japan. Our neighbours to the south finished ninth overall, but still better than us. Canada’s overall rating: a humiliating 37, just one point better than last-place Russia and a full 30 points behind top-ranked Great Britain. While the top finishing countries may only be doing an okay job, Canada is most definitely failing no matter what type of Bell Curve is implemented to lessen embarrassment.

The UK, Germany, France and Italy were treated as individual economies, but they are also part of the EU economy for this study. Some data was not available for all 28 EU member countries, and that is noted in the ACEEE report.

It should be noted that there’s a lot more to this than merely bragging rights about who is the best at such things as turning out their lights when leaving a room for an extended period of time. Energy efficient nations also stand to reap a number of residual benefits such as increased marketplace competitiveness, and by extension the ability to create enhanced employment – which in turn stimulates national economic development.

ACEEE Executive Director Steven Nadel noted rather forcefully that the U.K. and other leading economies of Europe are now well ahead of the United States and Canada when it comes to energy efficiency. Indeed they are.

“This is significant because countries that use energy more efficiently require fewer resources to achieve the same goals, thus reducing costs, preserving valuable natural resources, and creating jobs,” Nadel says. “Unfortunately, our results show that nowhere is the vast potential for improvements in energy efficiency being completely realized. While many countries achieved notable success, none received a perfect score in any category – proving that there is much that all countries can still learn from each other. For example, the United States scored relatively high in buildings, but was at the bottom of the list in transportation.”

As one would expect from a country finishing at the top of such a list, Britain’s formal response to the scorecard was one of great satisfaction.

“I am particularly pleased that the UK is ranked first of the 12 economies considered by the study,” states Edward Davey, British Secretary of State for Energy and Climate Change. “Making our buildings and industries more energy efficient is a significant challenge, one that will take years to meet; doing so cost effectively will mean drawing on the experiences of others. This study is a fascinating collection of best practice, setting out the innovations which can accelerate economic growth, enhance energy security – and save our households and businesses money.”

The rankings are based on ACEEE’s time-tested approach to energy efficiency. The 12 economies that were ranked represent more than 78 per cent of the world’s gross domestic product; 63 per cent of global energy consumption; and 62 per cent of the carbon-dioxide equivalent emissions.

CBJ spoke with Sara Hayes, one of the three lead authors of the 100-page ACEEE Energy Efficiency Scorecard. She tells us that in a comprehensive study such as this where numerous countries are being compared side-by-side, a number of variables are taken into account in an effort to put everyone on an equal footing coming out of the gate and making the ratings system as fair as possible.

“For example, with energy consumption in buildings, temperature and climate is going to have a big impact on that,” she says. “There’s a thing called Heating and Cooling Degree Days, so you count how many degrees or how many days a country is above or below a comfortable level.”

“You take 65 degrees and if the next day it were 75 degrees, that would represent 10 heating degree days and if the day after that it was 55, then it would be 20 heating degree days,” Hayes explains. “You add them up for the year and that gives you some idea how far away – either up or down – a country is from a comfortable temperature.”

But with an overall score of 37, just catching the leaders – who themselves are considered merely average when it comes to energy efficiency – will take some major adjustments in order to improve this country’s lagging standard.

“There’s a couple of areas where there’s a lot of room for improvement,” Hayes bluntly states. “Energy use is very high for both commercial and residential buildings and every other country had a pretty decent number in one or the other.”

To compare, France received a zero in energy use in residential buildings but a 3 in commercial buildings whereas Canada had a 1 in both categories.

“What’s really telling to me is that Canada got a zero in building codes for both residential and commercial and building codes is what helps make your buildings more efficient,” Hayes points out. “In Canada there’s a national model rule, but we would have given credit if the majority of provinces and territories had adapted them and they haven’t.”

The research began in the autumn of 2011 and concluded at the end of winter, 2012 and that’s when ACEEE began compiling the mountains of data, much of which was from 2009 and 2010. This is the first ever such report with a follow-up anticipated two years from now.

“In order to put the countries on a level playing field we had to pick years that we could get data for every country,” Hayes states.

Even with the report just recently released, Hayes says some countries have already begun programs to stimulate improvement.

“I think we’ll see China move up but it’s impossible to guess because the scoring is relative to other countries but China has been a real leader in the last two years and a lot of that stuff has not appeared in the data we’ve done here because it’s older,” Hayes notes. “They’ve done a whole bunch of really aggressive policies to reduce energy waste and I think we will see that showing up in the next edition.”

As for the United States, there is a plan to implement aggressive vehicle economy standards.

“I’ve seen criticism of building codes and some people saying they do that on a regional level and didn’t get credit for it,” Hayes says. “I don’t think people realize that the province and territories have not yet adopted the energy building codes that the national model rule has set out. It’s a really important area where you could see a lot of improvement.

In addition to that, as a complementary policy, Hayes says building labeling – which is where the building owner will make available information publicly available about how much energy is consumed by a building. If you are going to rent or lease or buy a building the person entering into the agreement would have some idea of what the operating costs of that building would be. In other words – transparency; right now, it’s something that’s primarily unknown.