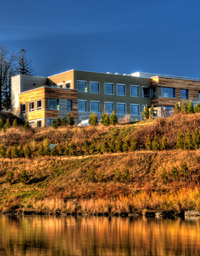 Although green building is ubiquitous, it hasn’t always been this way. It wasn’t until 2004—the year LEED took off in Canada—that the construction industry started taking it seriously as trend that wasn’t going away. And after An Inconvenient Truth hit theatres in 2006 and climate change became the number-one global issue, consumers got on board.

Stephen Carpenter, president, graduated from the University of Waterloo shortly after the OPEC oil crisis—a time when energy was on everyone’s mind. So when he started the engineering company in 1980, he wanted to help people make their buildings more energy efficient. “No one called it green building at that time,” laughs Carpenter, “but in essence that’s what we were doing.”

For the first 10 years, Enermodal’s consulting for efficiency was fairly intermittent. In that time, however, the company did a lot of work for governments, looking at new technologies and evaluating their viability.

It was in 1991 that Enermodal did its first green building, The Waterloo Green Home. “It was for a competition to design and build the greenest possible house, and we were one of the winners,” Carpenter recalls. “The house was very successful; it was open to the public for a year. That competition helped to expand our perspective of green building, as well as our service offerings. Shortly after that, in 1995, we designed a green office building, called Green on the Grand, in which we would be one of the tenants. Again, it was a competition and we were one of the winners. The building is still holding up very well.”

As time went on, more people were hearing about Enermodal and the company started do a couple green buildings per year. “The turning point was in 2004, when the LEED (Leadership in Energy and Environmental Design) rating system was released in Canada,” says Carpenter. “That’s when we took off with the strong demand for green buildings. We have been growing 30 per cent every year since 2004. We paid our dues over the years in terms of learning about green technologies and doing some the early buildings, so when the market came along, we were ready to serve it.”

Today, Enermodal Engineering is an industry leader, employing over 100 green building specialists across Canada and working on sustainability projects worth over $5 billion. Having pioneered some of the most innovative green building technologies—including rainwater cisterns, onsite biofiltration, radiant cooling and variable flow refrigerant systems—Enermodal’s success is rooted in a hands-on, technical understanding of building systems and energy use.

Without a doubt, the company’s flagship service is LEED green building consulting, a design service that helps clients get LEED certification for new and existing buildings. “Part of that consulting involves energy modeling, which predicts the energy performance of the building and finds ways to make it more efficient,” says Carpenter. “Modeling leads to commissioning—making sure the buildings operate in the way they were intended. If we’re expecting significant water savings, for example, we want to make sure the building is delivering on those expectations.”

Because the company that has been in this industry for a relatively long time, it has seen various government building programs come and go. Why stick with LEED? “I saw that LEED was a program that was different,” Carpenter maintains. “We hitched our company onto the wagon early, saying if anything has a chance to succeed, it’s the LEED system. As a non-government program, it’s not subject to the whim of whoever is in power at the time. We also saw that no one could greenwash (that is, make unsubstantiated claims about a building’s efficiency) because there are measurable standards of performance.”

While LEED has certainly taken the market by storm, Enermodal Engineering is serious about results, not just good PR. “We are very performance driven,” Carpenter explains. “When we get involved in a LEED project, we take it seriously. Our job is to get a LEED plaque on the building, but more importantly, our job is to ensure the building actually performs to what the client expects. That’s why we offer as many services as we do. We have seen other companies lack delivery in the required quality, so we started taking on those services ourselves.”

“In my view, there are a lot of LEED buildings that aren’t delivering on the savings that the owner expects,” he continues. “Our strength—because we’re engineers and have great design people—is being able to perform a critical review of the building and make sure it’s operating at the end of the day. After all, the whole point is energy savings. We have seen LEED become mainstream, but the next evolution is making sure the ‘greenness’ of a building is determined by its environmental impact, its energy use, water use and so on. It’s important that building actually delivers.”

Carpenter also emphasises the importance of LEED-EBOM (Existing Buildings: Operation & Maintenance), a standard for regularly measuring a building’s environmental impact, years after its construction. “A building might be designed and built to LEED specifications, but how it actually runs is never known unless it’s measured and reported,” he adds. “What Enermodal Engineering has been doing is collecting energy and water data on buildings that we have worked on; we then analyse the data in the first year of operation to make sure they’re working. In fact, our team just went to a Winnipeg conference to share those numbers with the industry.”

“Our motto used to be ‘our work doesn’t end until the plaque is on the building,’ indicating that we worked with the owner to get a job done. Now our motto is ‘our job isn’t done until the building is performing.’ It goes past the plaque. It’s a value add.” Canada is fortunate to have such dedicated professionals who are truly passionate about doing right by the environment.