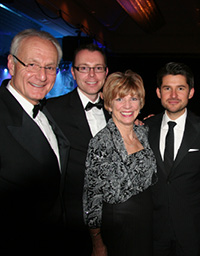 In their family business, Etherington Generations, the Etheringtons provide individual estate and insurance planning, handle executive and employee benefits and help clients plan for charitable giving. “About 30 years ago we chose the Special Olympics because our firm was doing very well and we wanted to put something back in the community. Then it just overtook us,” says Brian. The business has provided a platform for the family to launch their work with the Special Olympics, in fact 50 per cent of their time is devoted to raising funds and awareness for the cause closest to their hearts, the Special Olympics Canada Foundation.

“At an early age we became volunteers for that event and quickly fell in love with the cause and the athletes and the volunteers and the parents,” says Paul. “Anyone who has been involved in the Special Olympics quickly realizes its importance to society at large. Providing those with an intellectual disability the ability to become more active members of society is what the Special Olympics all about in my opinion, and we get so much more out of it than what we put in.”

Building upon the legacy started by Brian and Kirsteen, the Etherington brothers are engaging young supports to become involved with the Special Olympics cause. Noticing a lack of integration between young supporters and the athletes they support, Mark, Sean and Paul Etherington brought motionball to life in 2001. “Motionball is a purely volunteer run organization and as much as my brothers and I have been integral to launching this event, it couldn’t be possible without our volunteers all across Canada. One of our biggest missions with motionball is not only to raise funds but to raise awareness. We’ve had great support across Canada both in the music and acting fields, they are the ones that are going to tell your story to a bigger audience.”

Today over 3 million athletes compete worldwide in Special Olympics programs.  Alternating between summer and winter, the Special Olympics World Games are held every two years. There are also local, national and regional competitions in over 175 countries worldwide.

The 2011 summer Special Olympics will take place at the end of June in Athens, Greece and will be the world’s largest summer sporting event of the year with 7,500 athletes competing , 25,000 volunteers, pretty excited to be involved with it. This year, Canada will represent 109 athletes, with help in part from motionball. “It’s exciting to know that motionball has played a very small role in getting some of those athletes to attend that event.”

Motionball has 100 full-time volunteers with chapters in Ottawa, Calgary, Vancouver, Montreal and Halifax, which collectively put on 11 events each year. “But the number [of volunteers] is in the thousands when you talk about our corporate supporters who bring volunteers to events on an individual basis,” says Paul.
Through social and sporting events geared towards bringing young professionals and Special Olympics Athletes together, motionball has raised over $2 million to date.

When asked how to get involved with the Special Olympics, Brian says, “The answer to that question is to put your toe in the water. You are going to find there is an abundance of fruit to be tasted in terms of putting your shoulder to the wheel. In helping others, you gain…so that part seems to look after itself.”