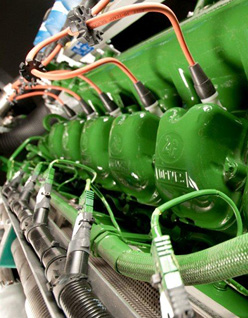 European Power Systems is a leader in the Canadian clean power sector. Based in Southwestern Ontario, European Power Systems began in March 2010 as a distributor of co-generation energy systems, ranging from 50 kilowatts to 4.3 megawatts. The vision was to specialize in high efficiency, clean power generation applications with a dedicated focus on combined heat and power systems. CHP systems supplied by European Power Systems use both microturbine as well as reciprocating gas engine technology provided by leading engine manufacturers such as MAN, GE Jenbacher, and Capstone.

“The regulatory environment in Ontario is such that it requires engines used for non-emergency power purposes to meet very stringent emission requirements,” said Jan Buijk, President of European Power Systems. “With the exception of microturbine technology, there is not a generator out there that is used for non-emergency power that can get away without emission control. It is not yet the case across Canada, but in Ontario it is regulated, such that the only exception is emergency standby generators. For co-generation and other distributed generation applications, these low emission levels have to be met.”

European Power Systems has found success in the co-generation of natural gas, in addition to high efficiency on-site power generation, and bio-gas applications. “Our vision has been to generate power as efficiently and as clean as possible close to where the thermal loads are located,” Buijk said.

In September 2010, European Power Systems sold its first project, a co-generation system, installed at the West End Community Centre in Guelph, Ont. The 400-kilowatt system provides both heat and power within the facility. Additionally, European Power Systems has sold several bio-gas projects across Canada, including a one megawatt system in Richmond, B.C. and a complete turn-key 2.8 MW bio-gas project in London, Ont. A 2.8 MW bio-gas project in Lethbridge, Alta. will utilize two 1.4 MW, 2G-packaged, co-generation modules.

In Quebec, European Power Systems started construction of the first landfill gas fuelled co-generation project. The Quebec project features a power plant operating on landfill gas from a nearby landfill in Drummondville, Que. Additionally, a nearby greenhouse entered into an agreement with the power plant to utilize its heat. The system put in place by European Power Systems captures this heat and then subsequently transfers it from the landfill power plant to the greenhouse.

The Drummondville site, to be built by Demers Farms, is a $12 million eco-friendly greenhouse project, and will be powered by bio-gas produced from the nearby landfill site, with a projection to produce electricity for the next 20 years. The report indicates that, over 10 years, the energy savings from this project is equivalent to taking 18,000 cars off the road.

“These are projects that we are very excited about and proud of, especially the plant in London, one that was challenging and unique,” Buijk summarized. “We came to an agreement with the customer last year, with the requirement to produce power by mid-December. We managed to pull that off. It was quite the feat to get that done.”

Fortunately for European Power Systems, being based in Ontario has proven valuable to the company as the province is known for its emphasis on green energy power generation. As such, European Power Systems has benefitted greatly in Canada, and specifically in Ontario with the Green Energy Act, a groundbreaking piece of legislation which promotes renewable energy production and conservation of energy.

In addition to renewable energy projects from landfill and bio-gas, European Power Systems sees a great opportunity for natural gas fuelled, on-site co-generation projects. For example, in urban settings, power can be generated in buildings such as hospitals, universities, commercial buildings, condominiums, etc., wherever heat is utilized. By utilizing heat recovered from on-site natural gas fuelled generators, more than 80 per cent of the fuel energy is utilized.

“This is a tremendous efficiency improvement when compared to the separate production of power and heat while also improving the air quality and reducing our carbon footprint,” Buijk concluded. “We are proud to be able to help reduce our reliance on fossil fuels and increase the use of renewables.”