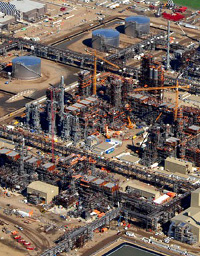 “This start-up is an important milestone for our heavy oil business,” said Marvin Odum, Shell Upstream Americas Director. “And it adds new capacity from an important source of oil in a world requiring more secure energy.”

The announcement marks the first commercial production from the upgrader expansion. The Scotford Upgrader processes oil sands bitumen—heavy oil—from the Muskeg River Mine and Jackpine Mine, for use in refined oil products.

With production capacity at the Athabasca Oil Sands Project now at 255,000 barrels-per-day, engineers will focus on improving operating efficiencies and adding capacity through debottlenecking.

Design and engineering work also continues on the proposed Quest carbon capture and storage project at the Scotford Upgrader. Quest could capture and store underground some 1 million tonnes of CO2 per year. A final decision to begin construction could come in 2012, once all regulatory approvals are in place.
Shell Canada Energy is 60 per cent owner and operator of the Athabasca Oil Sands Project (AOSP) along with Chevron Canada Limited (20 per cent) and Marathon Oil Corporation (20 per cent). The AOSP includes the Muskeg River Mine, Jackpine Mine and Scotford Upgrader.

Shell has been operating in Canada since 1911 and employs approximately 8,000 people across the country. A leading manufacturer, distributor and marketer of refined petroleum products, Shell produces natural gas, natural gas liquids and bitumen, and is Canada’s largest producer of sulphur. Shell is one of Canada’s oil sands developers and operates the Athabasca Oil Sands Projects on behalf of the joint venture partners.

March marks Shell’s 100th year of operations in Canada, prompting President and Country Chair, Lorraine Mitchelmore, to call for a national approach to energy that would pave the way for Canada’s emergence as a global energy superpower.

“Canada has all the hallmarks of an energy superpower, but we don’t have the right strategy to get us there,” said Mitchelmore. “Developing that strategy requires collaboration among all stakeholders–energy companies, governments, communities and NGOs. We need to agree on an approach to energy that meets our respective needs and benefits Canada as a whole. We at Shell Canada firmly believe that a collaborative approach is possible, but we must start the process as soon as possible.”

To be a fully-fledged energy superpower Canada needs a national energy strategy that includes fiscal and regulatory measures that promote the country’s international competitiveness.

“Key elements of the strategy should be a price on carbon, sustainable and affordable energy with a reduced carbon footprint, and a national rather than a regional approach to our energy market,” said Mitchelmore.

Mitchelmore added that Canadians also need to accept that the country must have an export market for its energy products.

Mitchelmore noted that Canada is in a strong position within the global energy hierarchy.

“Along with Norway, we are the most stable, the most reliable and the most democratic of the world’s top 10 oil and gas producers. That’s a distinct competitive advantage given the current turmoil in North Africa and the Middle East, where five of the other top 10 are located,” she said.

It means that Canada can emerge as the reliable, stable and socially responsible supplier of choice to an energy-hungry world.

“As a deep-rooted Canadian company, we have a vested interest in the future of the country’s energy industry and its economy. We also understand both the Canadian and the global energy markets, and as part of the global Shell organization, we have access to technology, knowledge and best practices that we can apply locally to support Canada’s effort to succeed globally,” said Mitchelmore.