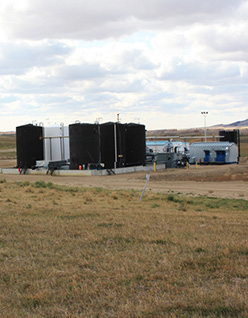 Oil and gas exploration company FairWest Energy was formed in August, 2005, by an amalgamation of Fairstar Explorations Inc. a public company listed on the Toronto Stock Exchange and Western Energy Corporation, a private oil and gas company.  FairWest is emerging as one of the Viking Oil Resource Play’s most significant players.

In January and March 2011, FairWest announced two significant farm-out agreements encompassing a portion of its large land holdings in the Viking Play.  Two companies committed to drill 7 horizontal wells by the end of summer 2011 to test the potential of the Viking Play.  This has shifted FairWest Energy out of survival mode (precipitated by the global financial crisis), accelerating into the Viking Oil Resource Play.

“We had to develop strategies to turn around FairWest by changing our focus to creating value from our assets rather than just managing our assets,” says Vern Fauth, CEO.  2009 saw the company put into forbearance and a 50 per cent reduction of its working line by its lender.  During this time, many companies did not survive but due to exemplary support from shareholders, board members, a new bank and sound management, FairWest is back at full strength with 220 gross sections of land, including a significant land position in the Viking Oil Resource Play.

“We have tremendous upside, primarily due to the commitment of very talented people who work in this company,” says Fauth. “Another positive factor is the commitment of our shareholders and a very strong board that supports management and develops strategies that management have executed to help the company get to where it is today.”

Among FairWest’s other considerable assets are its operated oil and gas facilities, network of pipelines, 2D and 3D seismic, $53 million in tax pools and a significant inventory of drilling locations.  2011 has been focused on continuing to increase shareholder value, unlocking the value in resource plays and targeting a 50/50 oil and gas production weighting.

“We currently have several wells being drilled,” says Fauth.  “The company has turned the corner.  At one point last fall our stock was 3 cents, but came up to 38 cents earlier this year.” Crediting his “great team of people” as the reason the company has come out with its core assets intact, Fauth is happy to be a part of “one of the few junior public oil and gas companies that are still here.  Most have been re-capitalized or sold, merged or gone into receivership.”

“This is a very exciting time in the oil and gas industry because of the new technologies,” says Douglas McNichol, President and COO. “For many years, Calgary has been a leader in seismic activity where our expertise has been developed and used worldwide.  Now Calgary is a leader in horizontal drilling and multi-stage fracturing technologies.  Areas previously thought to be depleted, or ‘tight’ (low permeability reservoir), are being developed horizontally, with a tremendous amount of resource to be found and developed.”

The Viking Oil Resource formation is a proven hot spot.  Recently, another public company announced its Viking horizontal oil well was producing at an initial rate of 500 barrels of oil per day.  So how does a small company with a huge land base ramp up its level of activity?

“We are bringing in reputable industry partners,” says McNichol. “FairWest has entered into two strategic joint ventures, one with a public company that committed to drill five horizontal wells by August, 2011.  Another private company agreed to drill two horizontal wells in another area.  One operator has already cased two wells and the other operator has cased one well.  Each operator has the option to continue to earn land through additional drilling.”

FairWest has two Mannville oil plays that it is pursuing in addition to the Viking oil plays.  In early June, 2011, the company announced it had completed an acquisition of property on the Mannville Oil Resource Play in the Berry Creek, Alberta region for $350,000.  The acquisition includes working interests in 1,440 gross acres of land (907 net acres), four oil wells, one gas well, associated wellsite facilities and gas pipelines adjoining the company’s existing lands.

Subsequent to closing, the company sold a 25 per cent interest in the acquired lands and wells and certain adjoining lands held by FairWest encompassing an additional 480 gross acres of land (to a company controlled by a significant shareholder).  FairWest has plans to rejuvenate several acquired oil wells and drill one or more horizontal wells at Berry Creek in 2011.  FairWest also has plans to source additional supply for its company owned gas plant at Berry Creek to process natural gas and recover natural gas liquids.

FairWest has other facilities located within its core areas.  “We have a nice oil battery in the Provost area. That oil battery is going to be upgraded to increase water disposal capacity and what that will do is allow us to increase the rate of through put,” says McNichol.

FairWest will be very active in 2011 as a result of its farm-out agreements and will enjoy high activity with relatively modest capital exposure.  “We will drill a significant number of wells for a low net cost because of these farm-outs—the net result is we can participate in drilling up to 17 horizontal wells and three vertical wells during the year.”

Fauth and McNichol are both understandably proud of the work done at FairWest. After coming out from under the storm of 2008, FairWest has a proven and tested management strategy and is taking it to the next level.